By Etgar Keret
Q&A | 7 minute read
The Israeli writer Etgar Keret's new collection of stories Fly is a collage of absurdity, despair and love. Here, the the veteran commentator on the circus farce that is life talks about his writing, his life, and catching a story by its tail

Your stories are incredibly profound while containing an eccentric humour – is this how you see the world?

When I write a story I try neither to be profound nor funny. I just try to survive the situation my protagonists are thrown into. For me, a story is like a quick and slippery animal running around in my study. To write a story, for me, is to catch that animal by the tail and let it drag you for a few pages until you get somewhere.

Humour and profound perspective are never the goal but when they appear, they’re a wonderful bonus.

I think that there is no way one can be profound without having a little humour and vice versa: you can’t be really funny if what you are saying doesn’t have a profound aspect to it. Being funny is, in a way, seeing the world from a different perspective.

There can’t be many short-story writers who have been translated into 46 languages (including Farsi) – what do you think makes your stories so universal?

Coming from the troubled and often very nationalistic Middle East feels sometimes as if being just a human being is a luxury. If you say that discrimination between people in the territories is wrong, you automatically become a self-hating lefty, if you feel that as a citizen in your country you are obliged to accept the compulsory duty of serving in your country’s army than you must be a fascist, and if you believe that workers are allowed to protest about their working conditions than you are a communist, or worse. When I write, I do not ignore the reality I live in but I do try to show the ideologies as nothing more than a costume worn by universal human emotions.

In Mexico, readers who come to me after events just ask if they can give me a comforting hug

And do you see a difference in how your stories are understood/received – do people interpret you/them differently – around the world?

Yes. When I travel I see how in different countries the focus point for readers may change: in Taiwan readers mostly speak about the ideas and the imagination behind the stories, in the UK the reader’s perspective is much more political and ideological, while in Mexico, readers who come to me after events just ask if they can give me a comforting hug.

In ‘Jam’ from Seven Good Years, your mother described you as ‘a Polish writer in exile’. Is there something about your family or personal history/identity that gives you this incredible skill for finding the universal? Many of the characters in Fly Already are a little at odds with the world they find themselves in, while always being highly relatable.

I don’t think that my writing is especially Polish but I do think that the fact that my parents were immigrants who arrived in Israel from Poland after the Second World War affected my perspective a lot. My parents were not rebels, but coming from a different society and culture they did tend to look at many of the Israeli customs with curiosity, amazement and doubt. This ability to feel part of a society which you choose and love, and at the same time to question its ways was always a given to me and I guess it is present in my writing too.

It seems as though your very being contains these stories, and that to make a new collection they are simply downloaded from your brain, you could just go on producing them until a collector (editor) decides that they have enough. Do I want to know the truth?

I always write stories and at some stage there is a story I write that seems to declare itself as some kind of backbone to which many of the other, already written, stories connect. In this collection it was the email exchange in ‘A glitch at the edge of the galaxy’ that made me realise that all the stories I’ve written in seven years actually do have something in common. This key story for me is like some sort of a literary equivalent of a sun, and its existence turns the other stories, which in the past were just floating around like a bunch of totally separate drifting rocks, into a semi-coordinated galaxy.

Your previous book, Seven Good Years, was a collection of non-fiction – was there a very different process to writing those stories?

The process is totally different. When I write a fictional story I know very little of its plot and the writing process is all about discovering a plot which can capture a piece of emotion or human experience. The entire feeling is one of shaping raw emotional energies into a coherent tale. Non-fiction is much simpler and less adventurous to write because the story and the characters existed long before you sat down and decided to write about them.

Do you feel more exposed than with your fictional stories?

In some sense I feel more exposed in non-fiction because I’m the protagonist and I have to share with the reader my vices and fears but this doesn’t make writing fiction less adventurous and dangerous. Because it is actually while writing fiction that you learn more about yourself and your feelings. They are projected by fictional characters but tell you, just the same, very surprising things about your emotions and thoughts and since these truths appear as a part of a fictional tale it allows you to be more honest and selfless about them than you can ever be in a tale of non-fiction.

The film of your life, Etgar Keret: Based on a True Story, is wonderfully witty and true – could you tell me more about what it was like to have your life delved into? Does it now feel that ‘everybody in Israel knows Etgar Keret’?

Israel is a small place and everybody in it seemed to know me long before this documentary was made. Before the Dutch filmmakers approached me I had rejected a lot of requests to have a documentary shot about my life, because I’ve always felt that such a film would show some narrow perspective of my life while giving the audience the feeling that they now know me completely. What made me say yes to Rutger and Stephane was the fact that first and foremost they were interested in storytelling and in the role it has in my life and in theirs and not in ‘summing up’ what I’m all about. The questions they asked as filmmakers seemed to me genuine, interesting and ones I didn’t have a prepared answer for. It made shooting the documentary more of an adventure than just a guy putting on a show for the camera.

A prize is like getting a compliment. If you live your life expecting one then you are a very miserable guy

The new collection, Fly Already, won the 2019 Sapir Prize – does winning a literary prize like this on your home turf trump the global success?

To be honest, literary prizes are great fun but they are never a goal. A prize is like getting a compliment. If you live your life expecting one then you are a very miserable guy. This doesn’t mean that having Fly, Already win the most important literary prize in Israel didn’t make me tremendously happy, but not half as happy as writing the book in the first place or meeting readers who were genuinely moved by it.

What are you working on now? I hear word of a TV series…

My wife and I have just finished making a four-episode, French-speaking mini-series for Arte called The Real Estate Agent, featuring Mathieu Amalric. It is inspired by a few of my stories and tells the story of a real estate agent who travels through time. It is a comedy but a very sad and dark one. It is kind of a cross between Not the Nine O’Clock News and David Lynch.

Etgar will be speaking at the Southbank this evening, 3 September 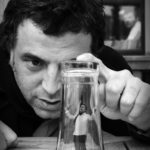 Etgar Keret is a globally renowned short story writer. Born in Israel in 1967, he is the author of five short story collections, a children’s book, and co-author of several comic books. His collection of memoir stories, The Seven Good Years, was published by Granta in 2015. His writing has been published in the New York Times, Le Monde, the Guardian, the New Yorker, the Paris Review and Esquire, and has been translated from Hebrew into 46 languages – including Farsi. He was the subject of the documentary, Based on a True Story, which won an International Emmy in 2018 and Fly, Already won the 2019 Sapir Prize – Israel’s most prestigious literary prize.
Tags :
Q&A Israel middle east Polish Second World War short stories writing