By Ian Thornton
Q&A | 6 minute read
Ian Thornton on his new novel, Oscar Wilde's kids' stories and what to do when all your work is stolen by a monkey

At home. At my desk. In brief spells with a bad back. But after writing two books to come out this year, it will be a while before I write a novel again. I am now working on four or five television adaptations, and I think any writing now will be collaborating on scripts and screenplays. The imagination – or at least the one fertile enough to fuel a 400-page novel – needs to remain fallow for a season or two.

The last good book was Dracula.

I used to go to see ten or fifteen films a week when I was in London and living near the South Bank, immersing myself in the art form to inspire my first novel. I have not been to the cinema since my kids were born. They are now six and seven. I used to love the retrospectives at the NFT. Welles, Hitchcock, Lean, Mankiewicz, the Archers. The last great film I saw (for the sixth time) was Herzog’s Fitzcarraldo. I watch it regularly, and also the documentary of the making of the film, Burden of Dreams. I do this to remind myself of how utterly soul-sapping production can be, but that one must always prevail. Never give up. Never give in. As Herzog says at the end of it, ‘If I gave up I would be a man without dreams. And I do not want to live like that.’ When I recorded it on my PVR, little did I know that within three months Herzog would be attached to my film project. I do not believe in signs or master plans or fate. Just lovely bloody coincidences that come about from being in the game, eyes open, antennae up.

1984, The Great Gatsby. Oscar Wilde for the brilliance of Dorian Gray and the wit of The Importance of Being Earnest. But for me, his relatively unknown kids’ stories and fairy tales are where it’s at. The Fisherman and His Soul is a life-changing experience.

What book inspired you to be a writer?

Not a book. The films of Michael Powell and Emeric Pressburger. They were my road to Damascus moments. Watch The Life and Death of Colonel Blimp on a big screen at the South Bank and remain unmoved. I defy you. Or A Matter of Life and Death. Or Black Narcissus. Or The Red Shoes. Good god, this is the stuff of utter genius. Life-affirming stuff for which I shall be forever grateful; lucky that I looked in Time Out and decided to wander down to the river that evening. I’d be dead otherwise. But that is a longer and duller story.

For the first novel, pen and paper in the Costa Rican jungles. After those scripts were stolen by a howler monkey – a very long story – it is now only laptop.

I re-read A Confederacy of Dunces, because it is my favourite book. I recently re-read Dracula as I am working on a related script. But usually life is too short, and having two young children, publishing two books in one year and optioning four other properties for the screen decimates any chance I have of reading. I wonder whether it is having the kids (I hear it is partly this) or the use of a screen and the way we digest news or, perhaps more worrying, my age that leaves me unable to concentrate and read more than ten pages at a time. I am an optimist (at least until lunchtime each day), so I am hoping I will once again be able to read a book in a few days. I remember that I used to enjoy doing that. In that other life. Before.

Ignatius J. Reilly by a Louisianan swampy mile / Most of the twats David Copperfield meets.

When they kicked me out because I was with my dog, Stan. They maybe had a point. But I usually find people who work in book shops (admittedly, library types are less guilty of this) despise writers, especially published ones. There appears to be a latent bitterness, which is staggering. I’ve heard vicious things out of their mouths, as their tics slowly kick in and the veins on their temples steadily bulge to plump.

Decades before in Yorkshire, kids such as I were being rammed up chimneys, so I am not unduly bitter

I want to think of something. I desperately do not want to pretend I have not lied. I haven’t read many classics if that helps and gets me out of it. Our school did not encourage the reading of the classics, nor did it encourage the teaching of the language. I only learned how to construct a sentence, about word order, infinitives and prepositions, subject and objects from learning French and German, and reverse-engineering into the English I heard on the BBC News. Shocking schooling, but only decades before in Yorkshire, kids, such as I, were being rammed up chimneys, so I am not unduly bitter.

If you are asking me about where I might feel a fraud, I would say that I have shamelessly used Kirkus’s comparison of Johan Thoms to Gabriel García Márquez, while never having made it past page sixty of his classic, five times. One Hundred Years of Solitude, indeed.

Finally, what’s the elevator pitch for your book?

Aleister Crowley wasn’t a Satanist or the wickedest man in the world. He was Churchill’s best pal, Britain’s greatest spy who used his knowledge of the Occult to fuck with the Germans in two world wars. He was the Scarlet Pimpernel of the twentieth century. And he is coming back to save the world. 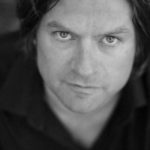 Ian Thornton's first novel, The Great and Calamitous Life of Johan Thoms, was published to acclaim in 2014. He is a co-founder of the global television industry publisher, C21 Media. Originally from Leeds, Ian currently resides in Toronto with his wife and children.
Tags :
Q&A Aleister Crowley Oscar Wilde TV writing