I work from home, so I have a dedicated computer room for all my creative endeavours. It features a single window with an excellent view of a hedge, which somehow becomes the most interesting thing in the world when I have a lot of work to do. Even now I can hardly tear my eyes away from it.

I recently read Blood Music by Greg Bear, a cautionary science fiction tale about what might happen if living cells became sentient. I can imagine my own cells being mortified if they ever discovered some of the activities I force them to participate in. The best film I watched recently was a Danish thriller called The Guilty, in which the entire story unfolds in real time through a series of phone conversations in an emergency call centre. A really interesting idea that works surprisingly well.

I expect you don’t get many children’s books about the end of the world, but considering how kids love to smash things to pieces it makes for a perfect subject

I was a big fan of the Moomin series by Tove Jansson, particularly Comet in Moominland. I expect you don’t get many children’s books about the end of the world, but considering how kids love to smash things to pieces it makes for a perfect subject really. I also have to mention The Crane by Reiner Zimnik, about a man who goes to work at the top of a crane and decides to never come down. He watches as the human world below is ruined by war and washed away by floods. It pretty much encapsulated how I felt as a child, and thinking about it now it feels like I’m doing much the same thing, hiding from reality and watching it crumble through the window of my computer screen.

Strangely enough, the book that inspired me to start writing wasn’t even a book and I never actually read it. There was a weird kid in school and one day he showed me this battered exercise book that was completely filled up with an insane rambling story he had scribbled. Up until then I had never even considered the idea that writing a story could be anything other than schoolwork, and even though I didn’t read a word of his epic scrawl, I felt so inspired by the sheer effort and ambition of it that I decided to have a go myself. I’ve been filling the world with nonsense ever since, not that I would ever call it nonsense myself. It all makes perfect logical sense as far as I’m concerned. Others may disagree.

I have to write with a computer because my handwriting is barely legible even to myself, but I still find it useful to have a pen and paper next to my bed for jotting down random ideas that pop into my head in the middle of the night.

There are a select number of books that I have read several times over the years. I tend to revisit things that I like, such as books and films and TV shows. It’s like going on holiday to a familiar place where you know what to expect, although sometimes old books can still surprise you.

I think the best fictional heroes are the ones who might also be considered villains. Life is too complicated to be easily divided into good and evil. The best example that springs to mind would be George Fotheringay from The Man Who Could Work Miracles by H. G. Wells. Our hero is an ordinary man who is arbitrarily given the power to work miracles, and has to decide what the best use of this power should be. Of course all his worthy intentions are undone by the fact that everyone wants the world to run according to their own rules. It was made into a film in 1937, and I consider it to be the only superhero movie that ever needed to be made.

I hope libraries find a way to remain relevant, even if I’m not using them

I last visited the library a couple of months ago, though I’m ashamed to say I was only using it for the free Wi-Fi while I was without internet. In a sense the internet itself could be thought of as a library I suppose, but I hope real libraries always find a way to remain relevant, even if I’m not using them.

I totally lied about reading Catch-22 when I was meant to be studying it in college. Years later I finally did read it and it became one of my favourite books, so I’m glad that experience wasn’t spoiled by having to analyse it for my A-levels.

Can you imagine how a horse could destroy the universe? No? Well you don’t have to, because I have described every step of the whole process in the form of a science fiction novel which you can now read. It’s called Horse Destroys the Universe and follows the life of an ordinary horse who becomes involved in a scientific experiment to expand the limits of horse consciousness. Then everything goes wrong, in some very interesting ways. 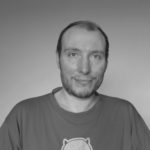 Cyriak is a British artist best known for his surreal animations using photo and video montage, which he began spreading on the internet in 2004. He has since built a career as a freelance animator, working on commercials, TV shows and music videos, and has a YouTube following of over a million subscribers. He currently lives in Lincolnshire for no apparent reason.﻿
Tags :
Q&A floods horse universe war writing