‘Books are made for passing on’

By Andrew Kidd
Shelfie | 3 minute read
Rathbone Folio Prize founder, Andrew Kidd, on what he reads, and the value of literary prizes

Can you remember the first book you bought?

As best I can remember, the first book I bought – rather than had bought for me – was The World According to Garp, which for some reason I fixed upon as the book through which I would discover what contemporary ‘adult fiction’ was like. It made quite an impression.

How big is your library now?

I’ve never done a title count, but it’s essentially how many books can fit in four floor-to-ceiling bookcases in the front room and another lot of shelves in two bedrooms. So, the answer is ‘quite large’. But I try to avoid allowing too many additional piles of books to spring up so occasionally undertake a cull.

By format, genre, and then alphabetically. (I know: OCD)

It’s about what prizes can do to engage people with quality writing, getting them excited about books’ capacity to show the world back to them in new ways

As above, I do purge books: for reasons of space but also because I try not to be too fetishistic about them and sharing them.

Truthfully, no! Because of what I do professionally, I’m generally up to speed on the books that most interest me by the time they start popping up on shortlists. For people who love reading but are far too busy with other things to ‘keep up’ though, prizes are clearly useful. And I think it’s not just the awarding of a prize itself: it’s about what prizes can do to engage people with quality writing more generally, getting them excited about books’ capacity to show the world back to them in new ways.

The only writer I ‘collect’ is the American post-war novelist, John Hawkes. I studied with him at university, and he was a greater influence on how I read than anyone else

What about the Rathbone prize shortlistees and winners? Do they get their own shelf?

Actually yes (more OCD), and they are a testament to our judges because every single one of them stands up to re-reading.

Boring maybe, but the original Daunt Books on Marylebone High Street. It’s an unbeatable space. I also admire what they are doing now with their own publishing. When I was in there recently I discovered a short, perfect novel called Sylvia, by Leonard Michaels, which they’ve cleverly reissued.

What’s on your ‘to read’ pile?

Too much, always. The next piece of non-fiction I’m going to read is Educated by Tara Westover. And on the fiction side I’ve made a start on the new Rachel Cusk novel, which in its own way is quite astonishing.

What is your favourite edition that you own and why?

The only writer I ‘collect’ is the American post-war novelist, John Hawkes. I studied with him at university, and he was a greater influence on how I read than anyone else. He was published for most of his 40+year career by New Directions, and I have multiple editions of his books from the 1950s/60s/70s, with rather wonderful graphic covers. Those are the editions I cherish most.

I try not to be too precious and have been known to break a spine, though my default mode is to keep them immaculate.

Absolutely. Books are made for passing on.

Do you like to get books signed by the author?

Yes, especially authors I’ve worked with, but not compulsively. I’m not a big one for signed first editions.

What is your favourite book currently funding on the Unbound site?

The City Will Love You by Nii Ayikwei Parkes

Andrew Kidd is co-founder of the Rathbones Folio Prize. Open to writers from around the world, the prize rewards the best work of literature of the year – regardless of form. It is the only literary prize in which all books – fiction or non-fiction – are judged, strictly on merit, by an Academy of writers. 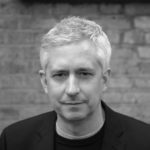