I told her I loved her book. And she smiled and said thank you then asked what I thought of the ending…

By Nikesh Shukla
Q&A | 5 minute read
Nikesh Shukla on superheroes, Diaspora stories, and why you should never, ever lie about having read a book

I try to write at my desk, which is in the corner of a big arts studio in Bristol, called the Pervasive Media Studio. It’s filled with artists, theatre makers, technologists and people doing really cool cutting edge stuff. I hate working in silence so being part of a fun and chaotic environment where I get to still share lunch with people and chat shit about Netflix shows is super important to my process. I also spend a lot of my time on trains. So I write a lot on trains. It’s a good time to concentrate. The internet’s rubbish so I can’t get distracted by pointless stuff.

I recently read Valiera Luiselli’s Tell Me How It Ends: An Essay in Forty Questions. It’s a short non-fiction book that documents the author’s time as a translator for child migrants. She goes through the forty questions she has to ask each child to ascertain how they arrived, why they arrived, how safe they are and who is looking out for them. It’s about the precariousness of life, and how children are collateral damage in a war… America versus the world. And the way they oscillate between being older than their years and younger than they should be is heartbreaking. I finally finally saw Inua Ellams’ Barber Shop Chronicles, which is silly because of how closely linked his essay in The Good Immigrant is to the play. It’s a joyous two hours of theatre about masculinity, family and inheritance. Much as I loved Avengers: Endgame, I feel like everyone should see the sublime and sweet Eighth Grade, which was inexplicably released on the same day.

Probably Bombay Talkie by Ameena Meer, which is a great, funny, coming-of-age, Diaspora story. It was the first time I’d read about South Asians in America and the stories it told were so similar to what was around me and I wanted to contribute my own voice to that canon.

Laptop. Honestly. Who has the fucking time for pen and paper?

Depends on the book. I recently re-read If They Come For Us by Fatimah Asghar and it gave me everything I needed. And more. Poetry forces you to slow down. Absorb the words but also the spaces between the words. The rhythms. And reading this book, I got different things from it each time. Same with Family Life by Akhil Sharma, which is a novel that is steeped in pain and pathos from the first page. It is a compelling lesson in conciseness, where you fill in the gaps. Each sentence asks you to search for the beats between the full stops. It’s astounding.

Spider-Man. Obviously. In terms of villain. The middle aged, middle class straight white male creative writing professor who keeps sleeping with one of his impossibly attractive younger students before being sad for three hundred pages. I hate those guys.

Yesterday. I’m a huge advocate for libraries. For years, I was lucky enough to not to need to use one. Because I had space to write at home and because one of the nice perks about being a writer is that people send you books they think you will like. Growing up, the library was an importance space for me. I had free rein and could read whatever I wanted. Having kids who are voracious consumers of picture books, the library has loomed large in my life again. We go every few weeks. And the kids have free rein. And we get to experience the magic of the library once again.

None of them. I’ve always been honest that I’m badly read in terms of the classics. I didn’t really read classics growing up. Comics. Star Wars and Star Trek tie-ins. Funny books. I just had no interest in them. I studied Emma by Jane Austen and loved it but never felt compelled to read anything else beyond that. I found out when I was working on social media for Booktrust that you should never lie about reading a book. I had to film Deborah Levy for something. And as we made chitchat, to relax her, I think, I told her I loved Swimming Home, even though I hadn’t read it. And she smiled and said thank you and then asked what I thought of the ending. And I panicked. And it became very obvious I was lying. I was so ashamed.

The Boxer: it’s Slumdog Millionaire meets Creed. A young man takes to boxing, after a racist attack, and as he trains with his best friend, watches him become radicalised by the far right. The book tells the story of their friendship over the ten rounds of their boxing match against each other. 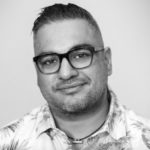 Nikesh Shukla is an author and diversity activist who conceived and edited The Good Immigrant, the acclaimed collection of essays about race and immigration by 21 writers of colour. He has been shortlisted for the Liberty Human Rights Arts Award and named as one of Foreign Policy's 100 Global Thinkers 2016 and most recently named by Time Magazine as one of the ‘12 Leaders Who Are Shaping the Next Generation of Artists’. He is also the author of several books for teenagers and adults.
@nikeshshukla
Tags :
Q&A Austen boxing reading Spiderman