By Phyllis Richardson
Q&A | 7 minute read
Phyllis Richardson's offers her advice for stopping booksplainers at parties, and discusses her new novel, filled with folklore, London history and a bit of magical dreaming

I take notes almost everywhere I go but I sit down to write at my desk in my room in our house that has all of our books in it, and a good chair and big windows that look out to a busy road. But there is also a tree in front and the shadows of leaves always remind me of Hemingway’s ‘A Clean, Well-lighted Place’, but in a good way.

I found Jesmyn Ward’s Sing Unburied, Sing strangley hypnotic, gut-wrenchingly tragic but so beautifully lyrical. Right now (for research on my latest project) I’m reading The Diaries of Hannah Culwick, a woman who worked most of her life as a maidservant (in the late 19th century) but had a decades-long relationship with an upper-class author, poet and lawyer, who had a thing for lower-class women. He loved seeing Hannah ‘in her dirt’, and she loved to serve him, when she wasn’t working long hours in other households. It’s just such a fascinating story that makes you want to know Hannah and what she was really thinking every time she got down on her knees to scrub someone’s floor and then had intelligent conversations with her lover while washing his feet.

In Dublin recently I saw a production of Edna O’Brien’s The Country Girls, which was funny and wry and inspiring, painful and hopeful. I want to go back and read more of her fiction, as well as the memoir.

When I was about 16 we read the story ‘Araby’ from James Joyce’s Dubliners in class. It just bowled me over with all of the images of light and dark, and the narrator’s journey from innocence to experience is so familiarly bitter. I loved the image of Mangan’s sister, standing in half shadow, like a religious painting. I now teach this story in my own class.

Shortly after that I read The Sun Also Rises, which gave me all sorts of romantic ideas about travelling to Europe and meeting brilliantly jaded people, drinking local wine and going to bull fights. I think I’ve done all of those things now, though not all at once or in any special order.

Ha! I’ve wanted to be a writer since I was about nine years old, maybe even younger. I don’t know if it was a book that did it, though, being the youngest of six, I was taught to read very early by my sister and grandmother. Maybe Dr. Seuss or the Little House books by Laura Ingalls Wilder did it. Really, though, I think it was probably my grandmother telling me stories about her childhood in a small town in Connecticut in the US in the 1910s. I grew up in the suburbs in Southern California, so her stories about her little village, ice-skating on the river in winter, seeing a horse that had been struck by lightning, going to a funeral not because they knew the person but because it was an event. Those stories stuck with me. She was from the French-Canadian side of town and my grandfather was from the Polish side of town and it was sort of a scandal that they got together.

I asked for a typewriter for Christmas when I was about 11 and used it to write my first masterpieces. My husband just bought me a vintage Olivetti, which I’ve been playing around with – I even entertained the thought of writing my current book on it. But usually I use pen and paper for ideas – I have stacks of notebooks – and for drafting out things. I do use the laptop to re-write and type out my notes and sketches. Although, if I can find a good supply of typewriter ribbon, who knows?

I often re-read because I teach English literature. I must have read Othello at least five or six times, ditto Great Expectations, Jane Eyre and Mrs Dalloway. But I always find something new – or at least it seems new; I may just have a very bad memory of reading the first time around.

I’m not sure whether he’s a hero, but the character at the end of The Recognitions, by William Gaddis, who spends his life writing his musical magnum opus and then causes the entire church to collapse when he finally plays it, has to be the character with the best ending of a fictional creative journey I’ve ever read.

For the villain, I’ll go for Captain Ahab – he stands for so many. ‘Let Ahab beware of Ahab!’

I go there every few weeks but usually to stock up on recycling bags. I do check out books there about twice a year. I use my university library at Goldsmiths, where I teach, about every week or so.

My grandmother’s stories stuck with me, about her little village, ice-skating on the river in winter, seeing a horse that had been struck by lightning, going to a funeral not because they knew the person but because it was an event

I was at a party many years ago and a guy was trying to impress me with his knowledge and understanding of Das Kapital. He was just sort of ranting about it in a superior way, and I got so annoyed, I said something like, ‘Well, yeah but it all unravels in chapter 3, the argument, it just doesn’t make sense’, and he stopped and looked very puzzled and a bit worried. I had him going for a bit but then I admitted I hadn’t read it. I was amazed at how easy it was to knock the wind out of him, but instead of feeling triumphant (well, I did a bit), I felt mean. Other times I just nod along when people talk about books I should have read: Proust, Balzac, Irvine Welsh (I know!) – the list is long.

Finally, what’s the elevator pitch for your own book?

It’s inspired by my research into houses in fiction (from my previous book) and by the idea (I found expressed by many writers) that a house can be inhabited by the spirits of  former occupants, or that there is a strong spiritual connection to the living, as in Virginia Woolf’s To the Lighthouse. It’s the story of a woman called Philadelphia, who looks forward to becoming a ghost and haunting the rooms she once lived in, so that she can find out what happened to the child who was taken from her. She came to London from rural Sussex in the late 19th century to get away from a troubled young marriage, worked in her aunt’s china and glass shop (receiving all the new designs from the Stoke potteries) and fell in love with her half-cousin. Her aunt didn’t approve, so they couldn’t marry until after she died. (The story up to this point, except for the ghost part, is true of a woman who lived in my house in North London.) It’s a vibrant time for a young woman whose world is opening up – she is learning a trade in the shop and attends lectures and suffragist meetings at the house of Charlotte Carmichael Stopes (mother of Marie Stopes) with her older female cousin. But women can only have so much freedom in 1870s London. And it’s not only the secret she carries with her that shadows her future happiness, but the judgements and secrets of others that are laid like hidden traps to thwart her. Pregnant with her lover’s child, she fears being thrown out on the street, as many women in her situation were at this time, but she is offered salvation. However, this comes at an unbearable cost. There’s some folklore, some London history and a bit of magical dreaming but mostly it’s a story of a woman who must navigate new opportunities and old prejudices to find her own way to be in this world while keeping her senses open to what came before, and what may be possible next.

The House of Fiction by Phyllis Richardson is published by Unbound 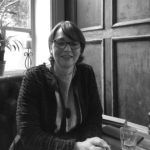 Phyllis Richardson is a native of Southern California and studied English literature at the University of California, Los Angeles. She moved to London in 1992 and completed an MA in Anglo-American Literary Relations at University College London. Her book House of Fiction (2017) brings together her interests in architecture/houses and English literature. She has written several books on design and architecture, including the highly successful XS series, Nano Houseand Superlight. She has written literary reviews and on urban development and travel for print magazines and newspapers, including the Financial Times weekend the Observer, the TLS and other journals. She teaches and coordinates the Foundation Year in English Literature at Goldsmiths University in London. She is currently at work on a book based on the life of a woman who lived in her North London house in the late 19th century.
Tags :
Q&A Das Kapital libraries Marie Stopes Suffragettes Woolf

Christine Burns on writing, campaigning, and the joy of moving text

A masterpiece in purple ink

The women are revolting!