read on
Photo by Nick Haupt on Unsplash

A fresh approach to music journalism

By Martin Fitzgerald
Q&A | 4 minute read
'I write about music a lot and one of the things that inspired me was a certain tendency amongst music journalists to suck the joy and wonder out of that subject. I just prefer a different story – an adventure if you like'

I’m hugely lazy, and undisciplined, so I really need a deadline to achieve anything. Wherever I am just before that deadline is where I tend to write – so home rarely, hotels often, but mostly on trains now that I think about it. I prefer being out and about, with little distractions here and there, rather than peace and quiet.

Book – I’m reading lots of Bernard MacClaverty at the moment because I’m supposed to be working on a screenplay about a fella from Northern Ireland. His short stories are incredible but one in particular – ‘Where the Tides Meet’ – had a huge effect on me. Film – There’s an Irish film on Netflix called Young Offenders which made me laugh 8 times. Theatre – I went to see a double bill of one act Pinter plays on Valentines Day – A Slight Ache and The Dumb Waiter. The latter starred Danny Dyer and it was great – very unromantic.

I have very clear memories of reading The Secret Diary of Adrian Mole Aged Thirteen and Three Quarters during a period of childhood sickness so I would probably say that.

‘If you have a garden and a library, you have everything you need.’ Personally, I can do without the garden – it’s the room in your house which is impossible to clean and full of wasps

I’m not sure any single book achieved that, but rather just books in general – the idea of temporarily living in other people’s imaginations.

I would say this though. I write about music a lot and one of the things that inspired me was a certain tendency amongst music journalists to suck the joy and wonder out of that subject. Take Sgt Pepper’s Lonely Hearts Club Band, for example, an album that has been written about probably more than any other. All the focus has been on the legacy, the recording techniques, and the ‘Summer of Love’ – particularly strange for an album almost entirely recorded in the winter. The story is told from now, looking back, and infused with lots of hindsight and socio-economic context that was never there in Abbey Road. I just prefer a different story – an adventure if you like. The biggest band in the world had a tough 1966 – there were thousands of unsold tickets at Shea Stadium that year, the whole ‘bigger than Jesus’ thing, and a diplomatic incident in the Philippines. So, on a plane, Paul comes up with an idea to do an album about an Edwardian Bandleader because, obviously, that will save the day. And for all the talk now of it being classic, mature, and progressive – that idea came from a 24-year-old.

Both of the above, plus phone and tablet. Whatever I have to hand really.

I recently joined a book group so had to re-read a couple of books – something I’ve never done before because, as you rightly point out, life seems too short.

What did I learn?

The 47 year old me liked Jamaica Inn EVEN more than the 25-year-old me did.

I have since left the book group after being forced to read a science fiction book called The Forever War which is still making my head hurt.

Hero – Juror number 8 from the film Twelve Angry Men. I love how Fonda picks off the rest of the jury, one by one, using their own prejudices against them. Fundamentally, he’s a great salesman and he uses Jedi mind tricks before they were even a thing.

Villain – I’d go for Juror number 8 from the film Twelve Angry Men because, despite everything I’ve already said, that kid is 100 per cent guilty and it’s not a good idea to let murderers walk the streets just to prove a point.

Last week. I live in Nottingham and I’m very lucky that we have an old subscription library, in a Grade 2 listed building that dates back to 1816. They have a quote in there from Cicero: ‘If you have a garden and a library, you have everything you need.’ Personally, I can do without the garden – it’s the room in your house which is impossible to clean and full of wasps.

None. As you’ll be able to tell from my next answer, that’s not my thing at all.

I made people with varying degrees of fame listen to great albums they’ve never heard before. Each guest would have to explain why they’ve avoided this really great album, laying out any prejudices in advance. I would then make them listen to the album three times and review it. Each chapter would begin with an introduction from me – an adventure story about the artists that made the album.

Right, this is my floor. Take care. 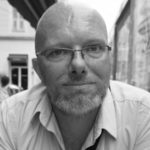 Martin Fitzgerald has spent most of his life daydreaming about music and has drawn the following conclusions: • Nico’s pronunciation of the word ‘Clown’ is the worst thing to have happened in the 1960s • Bryan Ferry’s dad seems like a lovely man • The only good songs about cars were written by The Beach Boys • The plot of ‘Down in a Tube Station at Midnight’ by The Jam makes no sense at all • There’ll never be a musician with a better name than Fab Moretti- Martin Fitzgerald was born in London and currently lives in a convent in Nottingham.
Tags :
Q&A Abbey Road Beatles Books Music reading Sgt Pepper Twelve Angry Men