Incontinent mice, two biscuit tins and a variety of flutes

By Chris Bran & Justin Chubb
Q&A | 5 minute read
Comedy duo Chris Bran and Justin Chubb explain how they write with each other, whether in real life or in the ether

Chris: Until recently we wrote together from a somewhat eccentric ‘studio’ in an old dairy in West London, complete with cobbled yard and clock tower. Our windowless man-cave – where we also recorded the folky songs for our TV show This Is Jinsy, with a drum kit, a guitar from South America made from two biscuit tins and a variety of flutes – could only be reached by dodging through a maze of vintage synthesisers under repair by an engineer working in a small cubbyhole at the entrance to the converted cowshed. Towards the end of our time there we also shared this writing space with a number of hungry, incontinent mice. Nowadays we write in a virtual space in the ether, logging on together through Skype from our homes, so those around us often hear disembodied, ghostly voices wafting into the room as we tap away.

Justin: A recent favourite, which I’ve ended up buying for loads of people, is Tonke Dragt’s The Letter for the King, written in the 1960s in Dutch (I think?) and only recently translated. It’s a breathless adventure of chivalry and danger set in a medieval kingdom. The economy of style, the sense of atmosphere and the insistent pace make it a real page-turner.

Very hard to choose a favourite film; there are so many! But I do like eerie films like The Innocents or Picnic at Hanging Rock.

In theatre, the production that had the most impact on me was back in 1988 at The Other Place in Stratford, which was a battered old barn in those days. It was an in-the-round production of Cymbeline featuring a young Harriet Walter. There was no scenery, just sound created by the actors using bottles and drums, moody lighting and great acting; so simple yet mesmerising.

Justin: My mum read to us from an early age, very wonderfully. She trained as an actress, so would do all the voices. Every night we’d have a piece of poetry, a Bible story then a chapter from a book. I didn’t end up religious but it did make me fall in love with books. She read us things like Stig of the Dump, E. Nesbit and the Narnias, which I loved. (I would often check the back of my flat-pack ‘wardrobe’ in case an alternate world had appeared there.) Later on she also tackled some pretty meaty tomes too, like Lord of the Rings and David Copperfield. I read voraciously after that brilliant start.

Justin: A friend of my parents gave me a copy of Mervyn Peake’s Titus Groan around the age of twelve. The moment I sunk into his world of finely etched words ­– much like the detailed, cross-hatched illustrations he was also famous for – I was hooked. It seemed such a believable, crumbling world, yet with so much recognisable Britishness in the convoluted rituals and Dickensian humour. There’s also a sweeping sense of operatic tragedy under the whimsy. The second book, Gormenghast, lifts the drama to even greater heights and is that rare example, like The Empire Strikes Back, of a second instalment that’s actually better than the first. It was only much later on I found out that Peake was living on the tiny island of Sark, just off Guernsey, where Chris and I grew up, when he was writing the trilogy. The crags surrounding the small, insular isle apparently inspired Gormenghast’s dusty, forbidding turrets.

Chris: Nowadays it’s a laptop but there’s definitely a more mystical connection from the physical action of using a pen, where sometimes you feel some other force taking the words where it wants them to go. Justin is always sketching and drawing, so for this book the only ink that went down on paper was for his illustrations.

Justin: I re-read a lot, despite the piles of unread books in the corner of every room. Most recently I’ve revisited some of the things I read as a child like Watership Down and the Moomin books (which just came out in nice hardback editions). Last year I really enjoyed second reads of Rebecca and the Anglo-Irish writer Molly Keane’s great, late novel Good Behaviour. There’s a future-dystopian book by Susan Cooper called Mandrake which I’ve read at least three times, and her Dark Is Rising sequence I quite often go back to.

Justin: A favourite villain would have to be Steerpike, in the Gormenghast trilogy again. He is a truly demonic yet charismatic figure who rises from the gutter to embark on an ambitious murderous spree. I do enjoy a good unreliable narrator too, which I suppose could be counted as villainous. The Victorian thriller Gillespie and I by Jane Harris features a great unreliable voice. Heroes are perhaps harder to think of. Most often it’s the voice of the narrator/hero I fall in love with, like Holden Caulfield in Catcher in the Rye, Pip in Great Expectations or Merivel in Restoration by Rose Tremain.

Justin: Not for a long time, I’m embarrassed to admit. Our local one has become spookily hi-tech, apparently; most days it’s not actually manned by humans. There are no actual droids there yet, I think, but that would be fun; a robot telling you to ‘Ssh!’ and recommending things to read.

Justin: None! I’m happy to admit defeat at the coalface of great literature. There are still a lot of weighty classics I haven’t tackled, like Ulysses and Remembrance of Things Past. Tristram Shandy is by my bedside right now, awaiting the right moment.

Chris: The pitch for Dad Droid would be something like: ‘After his father vanishes in mysterious circumstances, a young boy sets out to rebuild his dad as a robot, little realising the danger he is letting himself into.’ 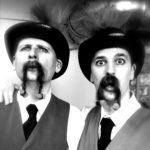 Chris and Justin are best known for creating, writing and starring in the Sky Atlantic comedy series This is Jinsy, which was nominated for a prestigious British Comedy Award and an International Rose d’Or. With Chris and Justin taking the lead characters, the show also featured some of Britain’s top stars in cameo roles, including David Tennant, Stephen Fry, Olivia Colman, Jennifer Saunders, Sir Derek Jacobi, Catherine Tate, Rob Brydon, Harry Hill, Jane Horrocks and Dame Eileen Atkins. Chris and Justin have also piloted a comedy for Channel 4, written a comedy-thriller for Rob Brydon and adapted the cult classic novel The Book of Ebenezer Le Page – an extraordinary Dickensian saga set over a hundred years on their home island of Guernsey. They have just released an album of new songs called Tvignest.
Tags :
Q&A dad droid mice robot writing