read on
Photograph by Andrew Schultz on Unsplash

I have a studio space with bars on the windows. Not the homeliest setting but it does focus your attention. Douglas Adams, author of The Hitchhiker’s Guide to the Galaxy, was famously locked in a hotel suite by his publisher. “I love deadlines,” he said, “I like the sound they make as they go whooshing past.”  With bars on the windows, new deadlines can’t reach you but then old deadlines can’t escape.

The last really good book I read, the one that stays glowing in my memory, is Stoner by John Williams. Ostensibly the story of an academic’s plodding career in the English department of a provincial university, it’s actually an eloquent paean to Literature itself. It’s one of those novels that seems to be larger on the bookshelf than it actually is. It reaches beyond its pages.

I loved Lost in Translation, directed and written by Sofia Coppola in 2003. It might not survive contemporary guidelines for gender roles. But that, in a way, is its charm; fragile, awkward characters fumbling for a connection across generations, continents and crumpled bed sheets – something we all need to access right now.

‘Creative non-fiction’ suggests that non-fiction is just a hyphen and a leapfrog away from flights of the imagination.

Susan Hill’s I’m the King of the Castle was published the year before I was born and I read it as a teenager. It petrified me. Not just because the story is so chilling (and it really is, the cruelty of one child to another) but because the writing is so imagistic and compelling. Animals brood with the symbolism of human consciousness. This isn’t just anthropomorphism – it is a recognition of the elemental energy of nature of which we are all a part. Goodbye Disney. Hello Donnie Darko. Goodbye Julie Andrews. Hello Kate Bush.

Opening Gabriel Garcia Marquez’s Love in the Time of Cholera was like taking a psychedelic. Stories transport you so much further than a long-haul flight can ever hope to manage. And Jay Griffiths’s Wild showed me that you don’t have to be restricted by genre. ‘Creative non-fiction’ suggests that non-fiction is just a hyphen and a leapfrog away from flights of the imagination.

I would never force anyone to untangle my handwriting. It would be like trying to unravel the fishing wire my Dad used for crabbing, far too much effort to get to the juicy bit at the end.

Re-reading doesn’t work for me. New ideas make time go slower and I relish those languid afternoons spent folding the corners of pages and trying to make sense of an author’s crisp perspective. I have a friend who is entirely different and rereads Proust’s In Search of Lost Time every ten years. It takes him two years at each pass. There’s something Buddhist about this. As if the words are a secular pilgrimage he has to retread again and again and again.

Jonny Pickles. No one else knows about him apart from my son who has long since given up on my wayward storytelling for the more exciting grotesques of Roald Dahl. Jonny Pickles lives in the shadows by the side of the road and is responsible for the ketchup coming out of the bottle too fast and the toast landing face down on the kitchen floor but also, thankfully, for the jam jar having just enough spread for one last snack. Of such mundane disasters and rescue missions the average life is made. Jonny Pickles hangs out with Freddie Onions. They both have shorts and grazed knees.

Last weekend. My son goes there to find books that have nothing to do with Jonny Pickles.

I recently lied about reading Georges Perec, the French novelist and essayist. His writing is all about absences. I was thus able to talk about the empty spaces in his work of which I know absolutely nothing.

Mind is the Ride is about a bicycle ride from the UK to India, a journey around the parts of a bicycle and an intellectual adventure from Western to Eastern philosophy. By the end of the book the ride has been completed, a bicycle built from the parts that make it and the journey from Western to Eastern philosophy made apparent. It is not simply another book about cycling but uses bike parts and the bike ride as a metaphor to help us understand our relationship with the world around us. It plays with the nature of reality in an age of capitalism. Think Zen and the Art of Motorcycle Maintenance without having to stop off at the petrol station. 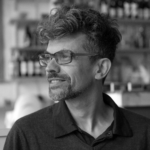 Jet McDonald is a writer, musician and psychiatrist. He spent a year cycling from Bristol in the UK to Trivandrum in India. He is the author of many articles for Boneshaker Magazine, a design led publication celebrating the human side of cycling and has written for the Idler, a collection of radical essays. He is a member of the Philosophy Special Interest Group of the Royal College of Psychiatrists.
Tags :
Q&A