read on
Abortion Rights protest in Dublin, calling for a repeal of the 8th Amendment, 2018 (Photo by Artur Widak/NurPhoto via Getty Images)

By Louise O'Neill
Extract | 5 minute read
Until last year, Ireland was the only democracy in the Western world with a constitutional ban on abortion. Read Louise O'Neill's rousing essay in favour of overturning the 8th Amendment, from the Boundless archive

It is Saturday, 24 September 2016. My alarm goes off at 5.45 a.m. It is dark outside, but I can hear the rain beating against my window and all I want to do is pull the duvet over my head and go back to sleep. But I don’t. I don’t because today is important. I leave the house at 7 a.m., my father warning me of flooded roads and urging me to ‘drive slowly’. He doesn’t like it when I drive in this kind of weather, but he doesn’t tell me to stay at home either. He knows that today is important too.

On the train to Dublin, I try and nap, but I can’t stop scrolling through my Twitter feed. There are messages of support from all over the world, similar protests being planned in London, Montreal, Paris, Berlin, New York. I can feel my excitement build as I see the photos of other people making their journey to Dublin, of their refusal to be deterred by the inclement weather. We are walking in the rain, my friend Dave tweets, to support thousands of women who have to face an ocean. As I disembark, an elderly woman grabs my hand. She has seen my sweater, she tells me. ‘Thank you,’ she says. ‘Thank you.’ She walks away before I can reply and I am left wondering about her and the countless other women of her generation who smile sadly when they see the sweatshirts ‘the young people’ are wearing these days, the word Repeal picked out in white letters on black cotton. What stories do these women have? What secrets have they kept? And for how long?

I battle my way through the crowds at the Garden of Remembrance. The number of people here seems almost incomprehensible. Tens of thousands of people, men and women, young and old, marching together because we believe in empathy and kindness. We think that women should have the basic human right to bodily autonomy. We trust women.

No matter how joyous the march is, I cannot help but think of the women who travelled before us, fled these shores in order to get the help they needed

The sense of solidarity is incredible. There are whispers that celebrities are marching, that Cillian Murphy and Hozier are standing with us. I see people I know and we hug one another. We say how glad we are to be here, to be a part of this movement. There is a ripple of something powerful moving through the crowd, as if our footsteps are rupturing the earth beneath us, shattering an archaic status quo. It feels as if something is shifting, like real change is finally imminent. The atmosphere is hopeful, buoyant almost. I had joked that I didn’t care about the rain, that my righteous anger would keep me warm, but in the end it was a sense of overwhelming love that infused me. Love for my gals who were walking beside me, for my friend Louise who marched despite being forty weeks pregnant, for the people passing by who clapped and cheered us on, for the organisers who worked tirelessly and thanklessly to ensure the event would go ahead. There are so many Repeal sweatshirts, and each time I see one, I feel so proud of Anna Cosgrave for what she has created. Just one person and an idea. Sometimes that’s all it takes, in the end.

But no matter how joyous the march is, I cannot help but think of the women who travelled before us, fled these shores in order to get the help they needed. Their ghosts walk with us, hungry, alone, scared, their mouths sewn shut by a Church and a State that tried to silence them with shame. I mouth the words of ‘We Face This Land’, the poem by Sarah Griffin.

Not a house. Not a city. Not a vessel, not a country. The laws of the church have no place on your flesh.

A veterinarian will abort a calf if a cow is falling ill.

How is it that livestock is

worth more to this land than us?…

We ask for the land over the water. Home over trial.

For our foremothers, ourselves, the generations yetto come.

Witches or women – these are our bodies which shall

not be given up.’

Sometimes I wonder what I would have done if I had lived in a different time from now. Would I have raged against racism in 1940s Mississippi? Would I have refused to be swept along in a wave of anti-Semitic fever if I had lived in Nazi Germany? Would I have fought for women’s suffrage in the early twentieth century despite the social and personal consequences? Would I have travelled to Belfast on the Contraception Train in 1971? Would I have been brave, I ask myself? Or would I have stayed silent for the sake of an easy life? It’s impossible to know, of course, but as I was sitting on the train home to Cork that evening, shivering in my wet clothes, I felt a sense of peace. I was glad I had been there and that when it came to my chance to stand up for what it is right, I had done so. I was glad that when, in years to come, people shake their heads in horror at the barbarism of forcing women to travel abroad to avail themselves of often life-saving medical treatment, I will be able to say that I did my bit. I will be able to say that I was on the right side of history, that I stood up and fought for equality.

And I wasn’t alone. There were thousands of us. We marched for the pregnant housewife denied cancer treatment for fear of harming her unborn child. For the fourteen-year-old girl who was raped by a neighbour and prevented from travelling for an abortion by the Attorney General. For Savita [Halappanavar] who died crying out for a termination and who was told this is ‘a Catholic country’. For a woman kept artificially alive to prolong the heartbeat of the foetus in her womb. For the woman who sought asylum in Ireland and who found she was trapped here in a very different way, her body becoming a prison she couldn’t escape from. And we marched for the ten to twelve women a day who continue to travel for basic healthcare, the women we have forced into exile, the women we have made criminals of and told to keep their secrets for fear of recrimination and judgement.

We marched. And we will march again.
We will keep marching until our voices are heard.

This essay features in ‘Repeal the 8th’, edited by Una Mullally and published by Unbound. It includes writing by Anne Enright, Tara Flynn, Lisa McInerney, Caitlin Moran and more. 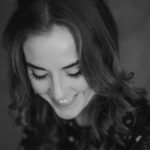 Louise O'Neill is a feminist and outspoken voice for change whose novels Only Ever Yours and Asking for It helped to start important conversations about body image and consent. Asking for It won Book of the Year at the Irish Book Awards 2015 and stayed in the Irish Top Ten fiction chart for over a year. Only Ever Yours won Newcomer of the Year at the Irish Book Awards and the Bookseller YA Prize. Film/TV rights have been optioned on both books. Louise lives and works in West Cork, Ireland. She contributes regularly to Irish TV and radio, and has a weekly column in the Irish Examiner. She has just published her third novel, Almost Love (Photo by Anna Groniecka).
@oneilllo
Tags :
Extract 8th amendment Abortion Ireland Repeal

The battle over women’s wombs

‘Our language is where we began and where we go’

Our voice is meant to reveal where we come from but accent is much more complex and mercurial than that.