By Shahed Saleem
In pictures | 3 minute read
Shahed Salem is a leading experts on Islamic architecture in Britain. His book, The British Mosque, provides a rich visual investigation into Britain's architectural and social history, from the earliest examples in the late 19th century to the modernist mosques built today, including one he designed himself

My earliest memory of a mosque is, as a child, climbing a narrow timber staircase to a prayer room above a shop in a south London Victorian terrace. It was one of an emerging number of mosques in the 1970s formed through the ad hoc conversion of existing buildings to serve a growing Muslim community. A few years later I lay on the carpet of the new Regent’s Park Mosque, gazing up into its deep blue dome, marvelling at the expanse of space – my first experience of purpose-built Muslim architecture, and what it could be.

Between these two early memories is the story of the mosque in Britain, from local grass-roots religious spaces assembled with whatever means the community could muster, to landmark buildings signifying the presence of Islam in Britain. In the years that followed I watched and assisted my parents establish the first mosque in south-east London. It started with Friday prayers in the living room at home, followed by renting local community halls, organising social gatherings, collecting funds, and eventually purchasing a house to convert into a dedicated place of worship.

[My] book is a testament to that pioneer generation – post-war Muslim immigrants, mostly from India, Pakistan and Bangladesh, who battled poverty, exclusion and racism, and through decades of sheer persistence, inventiveness and determination succeeded in establishing a Muslim social and religious infrastructure in Britain [….]

[I tell] the story of the mosque in Britain. It is a story of aristocrats and eccentrics, of sailors and immigrants, of empire and identity, a story spanning over 130 years, hundreds of buildings and thousands of lives. This story has many layers and many ways of being told, from the social, to the cultural, to the political, these narratives being both distinct and overlapping.

[…] It is primarily an architectural history, exploring buildings, aesthetics and urban development. But buildings are only given meaning by people who make, use and live with them, so the book also considers the social and cultural context of the mosque, investigating the processes by which it has come into being in Britain: how did mosques start, who initiated them, how have they been designed and built, how do the various Muslim communities meet their religious and cultural needs, and so on. Britain probably has the most diverse Muslim community in the world, with practically every denomination, school of thought, and ethnicity represented […]

There are early accounts of Muslims in Britain that date from the 16th and 17th centuries, with the first settled communities emerging from the mid-18th century and the first mosques from the late 19th century. Imperial Britain had, over centuries, established multiple political, cultural and social links with its colonies, where many of its subjects were Muslim. It was as a result of these imperial projects that Muslim communities first settled in Britain, coming to the country as, for example, seamen, students and scholars. After World War II, with the advent of decolonisation, large numbers of Muslims settled in Britain from certain parts of South Asia, and the Muslim population grew exponentially […]

This mosque opened in 1975 and was one of the first generation of post-war landmark mosques. As the mosque was situated within a regeneration area, the planners required it to ‘integrate’ with the overall identity of the newly constructed neighbourhood. Accordingly, on its completion in 1975, ‘the building became a stylistic hybrid, signifying simultaneously its relation to its local context and to traditions of mosque architecture. 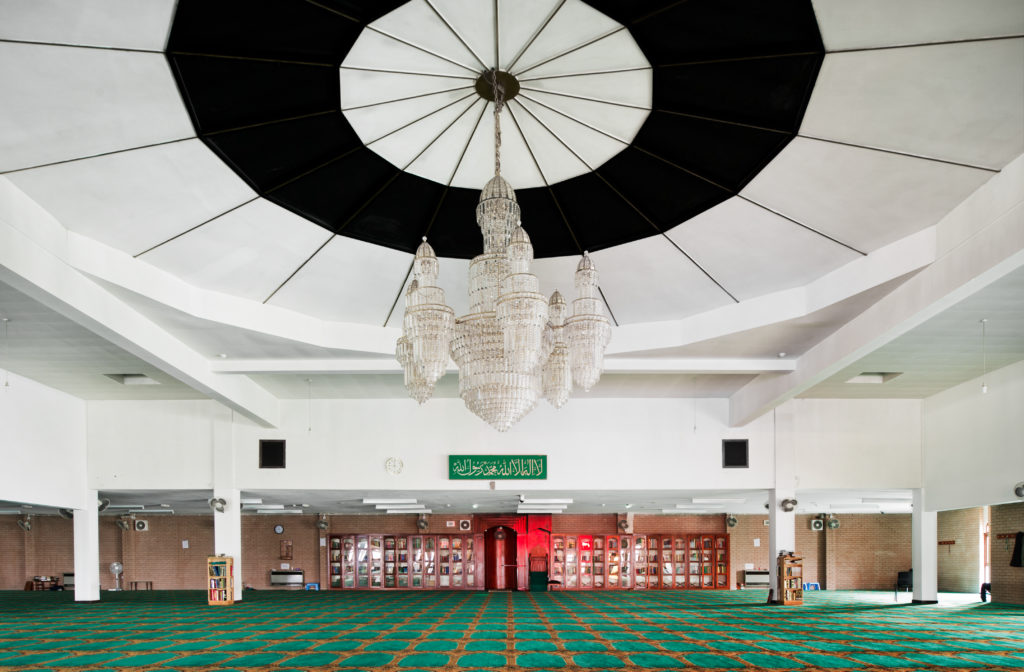 Maidenhead Mosque, with a green dome that replicates the dome of the Prophet’s Mosque in Madinah placed over the main prayer hall. Adjacent to the mosque is an ornate free-standing minaret, modelled on examples from medieval Cairo. 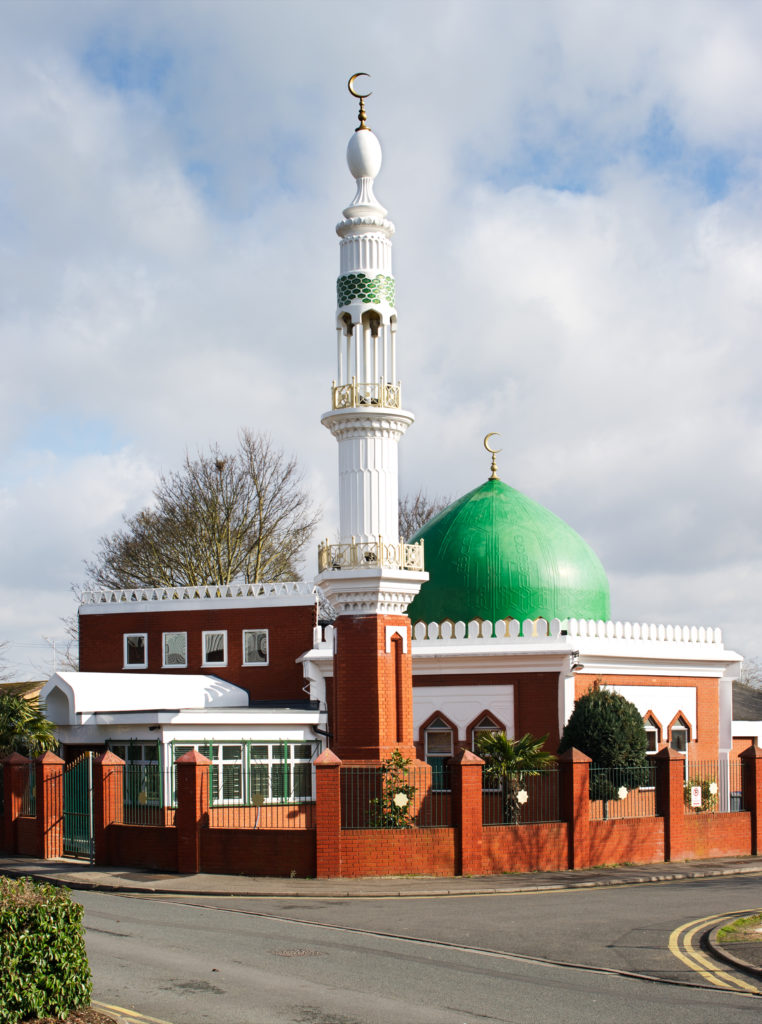 Shahporan Masjid and Islamic Centre Trust was designed by Shahed Saleem and was nominated for the Aga Khan Award 2016. The new three-storey mosque brought a new building type to this historically layered and rich environment, a new typology which represented the most recent phase of East End migration and introduced a new set of visual references. 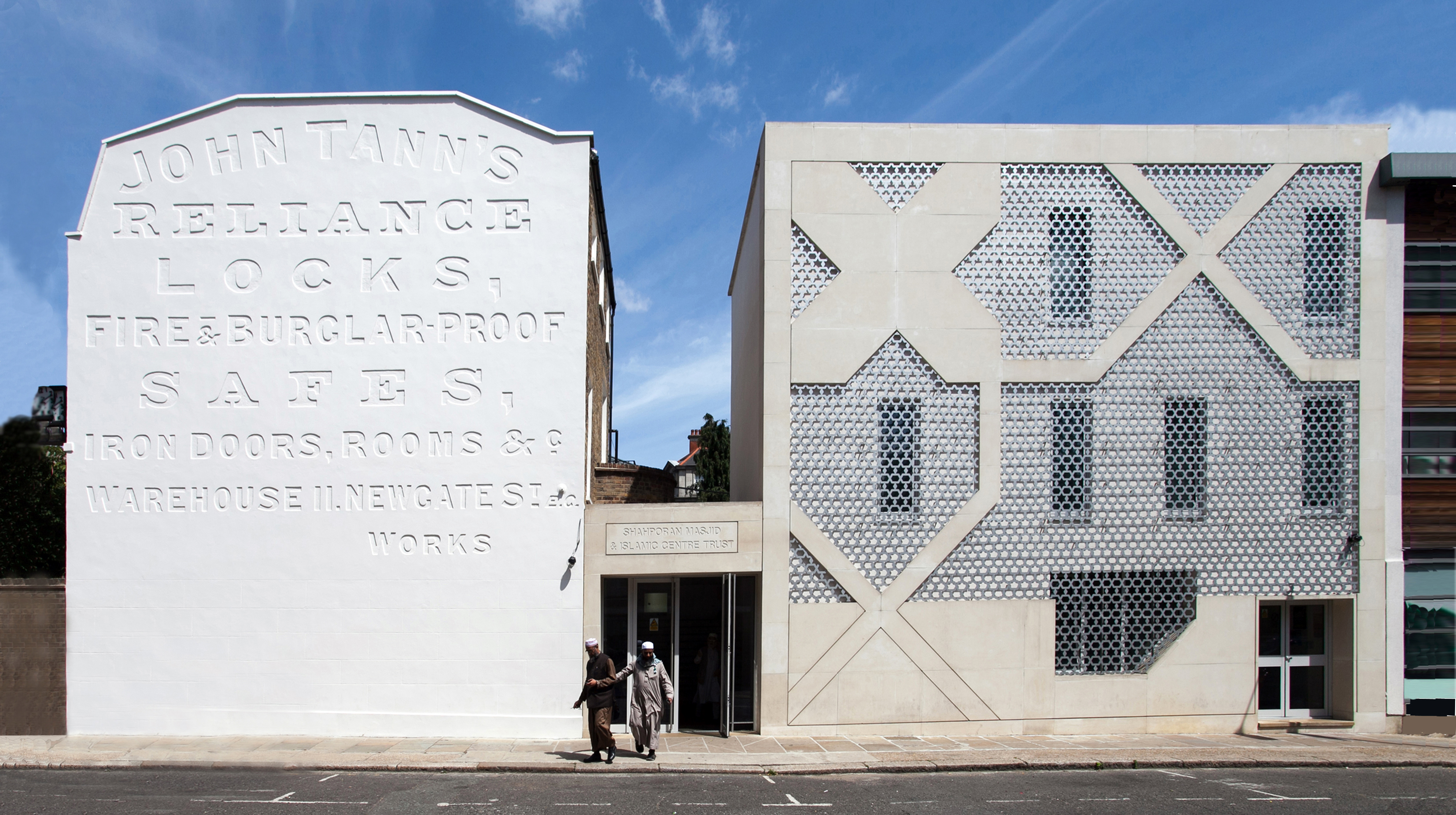 This was the first purpose-built mosque in Glasgow, and was completed and opened in 1984. It is a large mosque in a prominent location on the bank of the River Clyde, and has served as a landmark in the city. 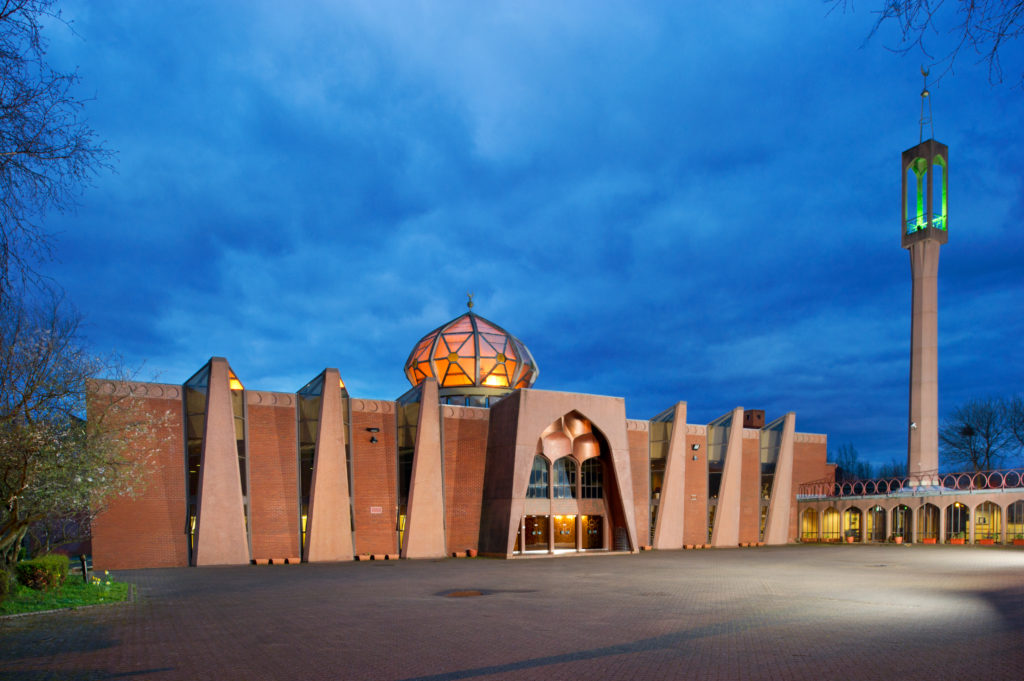 London Central Mosque (otherwise known as Regent’s Park Mosque), was designed by British architect Sir Frederick Gibberd and was completed in 1977. Sir Frederick’s design was chosen from 52 entries in an international competition by the Central London Mosque Trust in 1969. The landmark London mosque has been given Grade II* listed status in recognition of its historic, cultural and architectural importance. 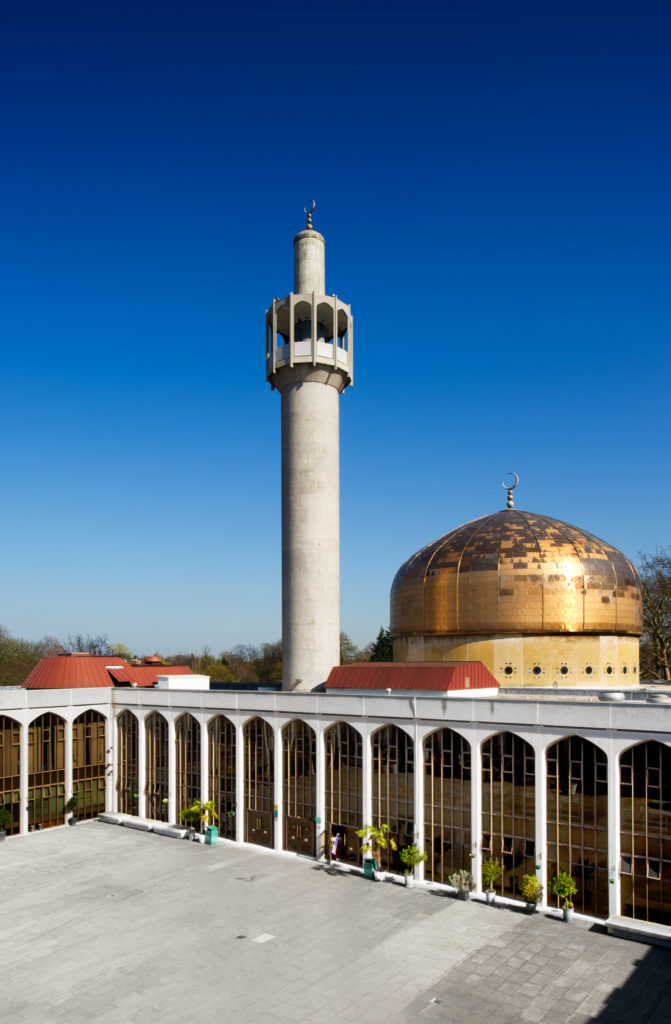 This was the first permanent, purpose-built mosque in Britain, founded by Dr Gottlieb Leitner, a Hungarian Orientalist scholar. Leitner’s architect, W I Chambers, took his inspiration from drawings of mosques he studied in the George Gilbert Scott-designed India Office library. Completed in 1889, the Woking Mosque has become the only Grade I listed mosque in the UK, upgraded from its previous Grade II* listing. 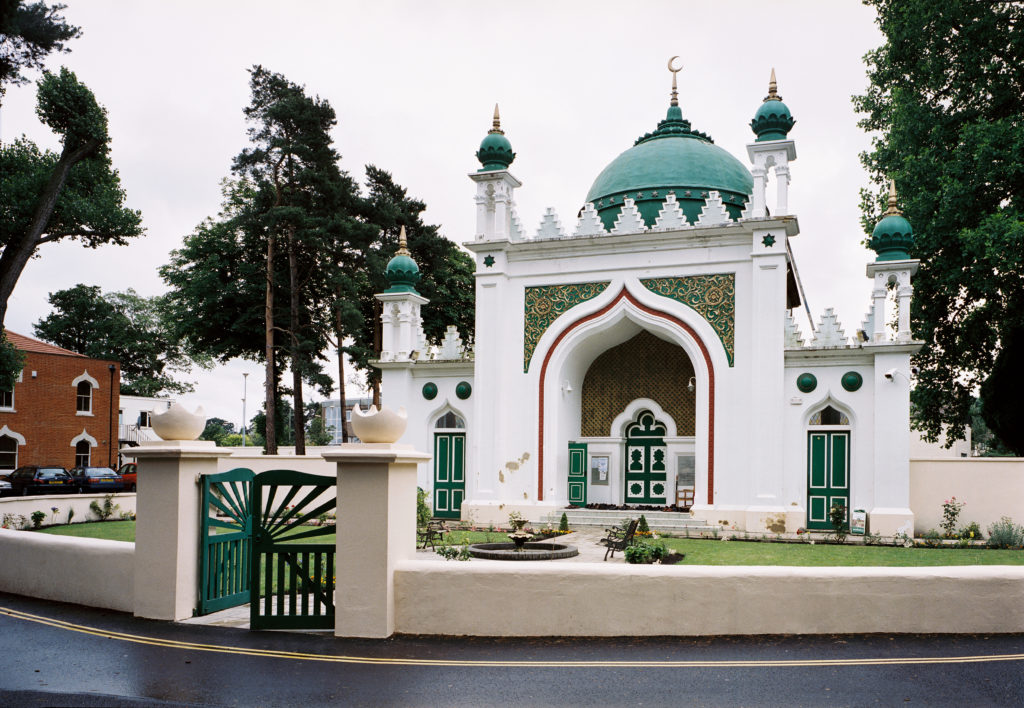 These images are among 350 photographs and illustrations in English Heritage’s archive and featuring in The British Mosque: An Architectural and Social History (Historic England) by Shahed Saleem. Buy a copy here 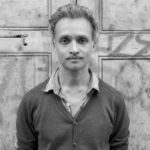 Shahed Saleem is an architect, researcher and lecturer at the University of Westminster, London. Through his architectural practice he has worked with faith communities for over 10 years in designing and delivering places of worship, and he regularly consults on academic and public projects focussing on the architecture and planning issues facing faith communities. His design work has been nominated for the V&A Jameel Prize 2013 and the Aga Khan Award for Architecture 2016.
Tags :
In pictures architecture holy Islam Mosques Muslim religious