read on
Down With Men! An anti-Suffragette postcard from author Diane Atkinson's collection

The women who rose up! And the men who didn’t like it…

Diane Atkinson’s book Rise Up Women! celebrates the Suffragettes who defied opposition – from teasing to torture – to fight for women’s right to vote. The campaign for women’s suffrage was fought ‘with great flair and imagination in the public arena’, the book points out. But one look at the book’s impressive endpapers demonstrates that the counter campaign was also fought with its own brand of flair and imagination. The propaganda against universal suffrage was varied, bizarre and often hilarious.

The artwork in the book is made up of anti-Suffragette postcards from Atkinson’s own collection. And some of the messages look remarkably familiar today. Suffragettes were all ugly, bad mothers and deserving of a spanking, according to the messages in these campaigning images. Does anyone wonder where the 21st-century anti-feminism movement is getting its ideas from?

Another theme that emerged from the early-20th-century anti-Suffragette postcards was the idea that the women’s movement was ridiculous and could never win. Well, we all know what happened next… 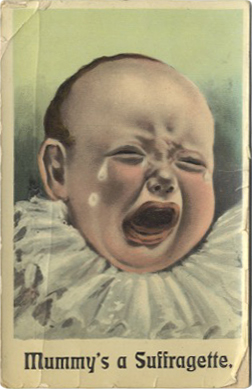 In 1918, fighting for your rights as a woman was considered an act of cruelty against one’s weeping child. Since then, feminism has only become more dangerous. ‘The feminist agenda is not about equal rights for women’, revealed the American commentator Pat Robertson in 1992. ‘It is about a socialist, anti-family political movement that encourages women to leave their husbands, kill their children, practice witchcraft, destroy capitalism and become lesbians.’ 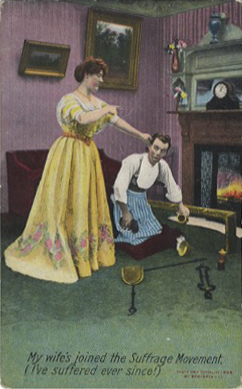 My wife’s joined the Suffragette movement…

‘These pathetic men declare themselves feminists — I’m talking comedians, writers, singers, politicians’, wrote Giles Coren in 2014, ‘because otherwise their careers are doomed. They do it in the same spirit as men in Nazi Germany joined the party, and it’s every bit as edifying to see.’ In case of any confusion, Coren insisted: ‘I am totally not… a feminist. I’m a man.’ Also this year, Donald Trump confirmed that he too is not a feminist. How very butch of them all. 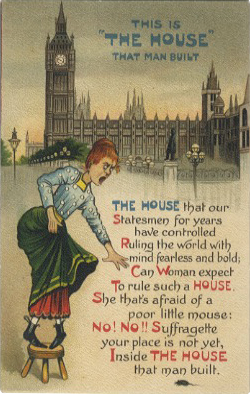 No no Suffragette, your place is not yet, inside the House!

Does a woman belong in the House of Commons? Just what the boxer Amir Khan must have been wondering, in the I’m a Celebrity… jungle earlier this year, when he asked, ‘Can a woman be prime minister?’ Err…

And parliament is still not a pleasant place to be a woman. When Diane Abbott first became an MP, she recently told The Independent, ‘There was harassment, there were jokes which weren’t that funny – it was partly to do with the fact it was a very male environment – 650 MPs, when I went there just 20-odd women… it’s a little bit better now – but there’s a long way to go.’

A very long way. A report published this month found that one in five people who work at Parliament have experienced or witnessed sexual harassment or inappropriate behaviour in the past year. 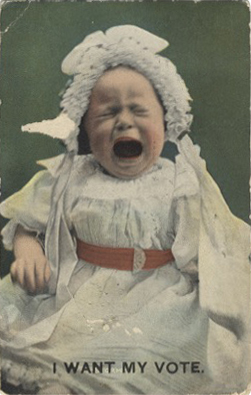 I want my vote!

Ah, these demanding snowflakes, they want it all, don’t they? A frilly bonnet, and the vote too? What will these cry babies want next?
These days it is millennials who are getting ideas above their stations, wanting rooves over their heads and lunch, too. ‘We’re at a point now where the expectations of younger people are very, very high,’ said the Australian businessman Tim Gurner last year. ‘We are coming into a new reality where … a lot of people won’t own a house in their lifetime. That is just the reality.’ And why not? They’re spending too much on avocados, according to him. 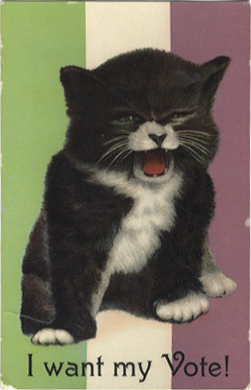 I really want my vote!

This image also carries undertones of ‘If we allow women to vote, we’ll have to enfranchise kittens, next!’ Much like Boris Johnson’s argument, in a 2001 book, that equal marriage for same-sex couples is equivalent to marrying dogs: ‘If gay marriage was OK – and I was uncertain on the issue – then I saw no reason in principle why a union should not be consecrated between three men, as well as two men, or indeed three men and a dog.’ Women, gay people, dogs… it’s just so hard to tell the difference, right? 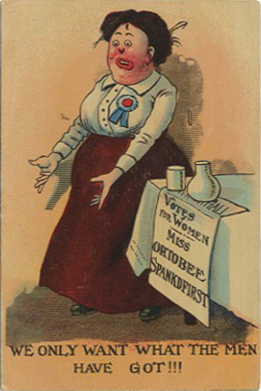 Who could have predicted, back in 1918, that one day the internet would exist so that all the world’s knowledge could be shared freely and creepy anonymous men could let women know that they deserve a slap without even having to visit the printing press?

Some brave men even say it to women’s faces. Take the Sunderland manager David Moyes, who last year told the BBC reporter Vicki Sparks: ‘You were just getting a wee bit naughty at the end there, so just watch yourself. You still might get a slap, even though you’re a woman. Careful the next time you come in.’ He later apologised, explaining that the remarks had been made ‘in the heat of the moment.’ 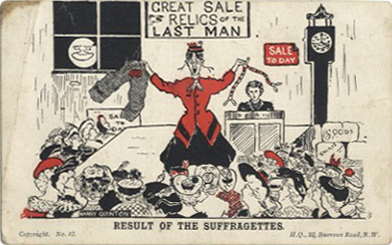 Relics of the last man – result of the Suffragettes

Given how long men have been getting forced out of public discourse, it’s a wonder there are any left. Perhaps it was the Suffragettes who began the process of eliminating all the blokes, but it’s taking women an awfully long time to finish the job (so inefficient, those women…), and middle-aged white men are still in a precarious state of being pushed out of senior positions by black women who ‘just slide into’ NGO jobs, according to that lone voice in the wilderness, Simon Jenkins. Writing in The Guardian last year, Jenkins (FSA, FRSL, prolific author, columnist for two newspapers…) complained: ‘Old white males cruise the jobcentres and head-hunters like ancient sharks, as if looking for a quiet beach on which to die.’ 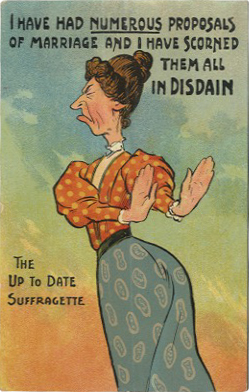 I have had numerous proposals of marriage…

The single ladies of the early 20th-century could hardly ignore the dire warnings: become a Suffragette, and you’ll never get a man. The Daily Mail still agrees, and continually outdoes itself in its campaign against women getting any ideas above their station. One brilliant short article from 2014 scored 10 points on the Mailometer: ‘Feminist judge who likes to be called Ms: Ms Justice Alison Russell is an arch feminist with a history of gagging the press. The judge… who is unmarried and has no children, was appointed to the High Court in January… she did not obtain her degree from an ancient university but from the then South Bank Polytechnic.’ Women everywhere are still wondering: how do you get to be appointed Arch Feminist, and where do I apply? 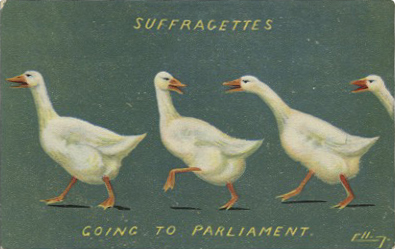 When women open their mouths they sound like squawking ducks! Was something it was considered acceptable to say out loud around the time of the first world war. Or in the 2016 American election, in which Hilary Clinton was repeatedly described as ‘shrill’. Or in the British magazine referred to by Mary Beard in her recent book Women and Power. ‘After one particularly vile bout of comments about my own genitalia, I tweeted… that it was all a bit “gob-smacking”. This was reported… in these terms: “The misogyny is truly gobsmacking”, she whined.’ 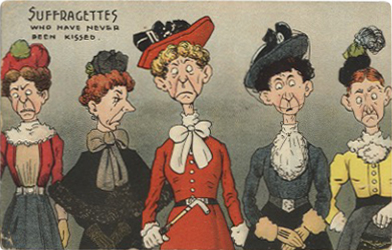 Ah yes, women are only interested in having equal rights because all the men don’t fancy them, of course. Just ask Hilary Clinton, Caroline Criado Perez, Mary Beard or any woman who ever expressed an opinion on Twitter. Or the unfortunate Labour MP Jared O’Mara, who resigned from the women and equalities committee after a constituent accused him of calling her an ‘ugly bitch’ in a nightclub. O’Mara denied the claim, but issued a ‘profuse apology’ for earlier sexist comments he had made online. Those comments were made during ‘a particularly difficult time’ in his life. 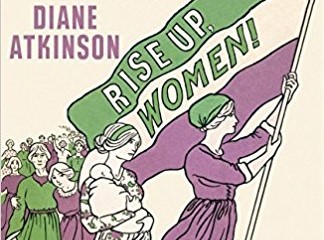 And, in better news: Rise Up, women!

A century ago, Suffragettes called on supporters to Rise Up, women! If only they’d had a hashtag…

This year, the Labour MP Jess Phillips joined forces with the feminist activist Caroline Criado Perez and supporters including the Fawcett Society to create a British arm of the #TimesUp campaign. ‘No longer will we tolerate a workplace, or anywhere for that matter, where the abused are more scared to speak up than the abusers are of getting caught,’ she wrote in The Pool. ‘Will you step forward to help us?’

Diane Atkinson’s Rise Up Women! The Remarkable Lives of the Suffragettes, is published by Bloomsbury

Katy Guest is a commissioning editor at Unbound and contributing editor to Boundless. She also works as a freelance reviewer, editor, journalist and events chair. She was the literary editor of The Independent on Sunday for seven years, and a journalist at the Independent titles for 18. Katy has judged prizes such as the Aesthetica short story award, the Desmond Elliott Prize and Fiction Uncovered. She writes for publications including the Guardian, the TLS, the-pool.com and Mslexia.
Tags :
Essay feminism Politics Suffragette Centenary Series Suffragettes votes for women

Are there benefits to radical disorder?

The lure of the Omnibus

What was it like to be a woman working the buses during World War One?