By Ilona Chavasse
Books by my bed | 7 minute read
Books for devouring, books for wedging and books for falling asleep to. Ilona Chavasse takes us through her bed-time reading

My husband calls it the bookalanche, and grimly predicts that if it gets any taller, he too will one night be buried under it as we sleep, leaving our children orphaned through my inability to read one book at a time and then put that book away. I only shrug and furtively re-arrange the pile whenever something begins to slide. Some months it is a towering stalagmite of shame, a great TBR siege tower all but bristling whenever I pick up a book elsewhere (and there are many more book-pile-elsewheres than you might believe of a small flat); but usually it is a castle shining with the promise of delights, the lake of many swords, the night of many stars, the triumph of hope over experience . . . in short, if I have a soul – and if you add my favourite pair of shoes, which I have, as that’s where they live anyway, on top of yet another pile of books – the many-seasoned book pile might just be a rough visual approximation of it. And yes, my sweet, I’m aware that mug is teetering, but put your schadenfreude away – there was tea in there but I’ve drunk it all. Seriously though, just give me five minutes to finish this chapter . . .

(Unseen) Queen’s Play and Checkmate by Dorothy Dunnett. Being the second and the last of the Lymond Chronicles, the last half-finished, because I keep going back to re-read the first five instead, so I never have to actually finish. Dazzling plotting, offhand erudition, charm, wit, cruel reckonings and unexpected pleasures – that’s just the protagonist, never mind the book.

Is That a Fish in Your Ear? by David Bellos –talkin ’bout translation. I now have two copies of this (not a problem, I have three copies of The Book of Bunny Suicides spread across three postcodes and two continents, and Andy, I treasure each one). They come out when the urge strikes me to a) think deeply about translation while panicking about an imminent translation deadline and b) underline clever passages. I seem to have underlined different things in each copy.

I bagsied this from the charity shop, which makes it even more ludicrously random and therefore more precious

Chanur’s Venture by C. J. Cherryh. Feminist, seventies science fiction, featuring anthropomorphic space-going lionesses (because the lions are too histrionic to take into space, what with their constant scrapping for dominance and easily bruised feelings), with cover art to match. No, I’m not kidding. It has the most consonant-ridden baddies (Kif!) and weirdest aliens (T’ca! Knnn!) in science fiction ever, and this is a Russian (!) translation I bagsied from the charity shop which makes it even more ludicrously random and therefore even more precious. Just thinking about this series makes me over-use the !

In a Dark Wood Wandering by Hella S. Haasse. A volume, to quote the immortal words of Roger Ebert, ‘unread by me’, but waiting as a reward for when I’ve done something constructive about the manuscripts it sits beneath.

CivilWarLand in Bad Decline by George Saunders. Same as above, squeaking in as my last throw in the year of short stories. It’s going to be hard to beat Diane Cook’s Man v. Nature and Camilla Grudova’s The Doll’s Alphabet, but I’m partial to Saunders’ short stories, so here’s hoping.

The Abrasax – my friend David’s unpublished novel (manuscript chapters of) about a strange New York skyscraper where an escaped Amazonian viper is more honest and less venomous than most of its residents, and which I can’t resist red-pencilling of an evening. (David, darling, you know I wouldn’t if I didn’t love the book. You know I love the book, right? I love the book, it’s a very good book.)

A) A Russian fantasy, in an inverted beauty-and-the-beast tale, the princess is pretty beastly and the dragon who mistakenly carries her off is goddamn complicated. There’s emotional abuse and adultery, which you don’t tend to see in fairytales on the whole. Oh, and swoony romance. So, so great.

B) And for something completely different, a young Ukrainian writer’s novella featuring a soldier who thinks she is a dog and is caught, alongside her doomed squad, in a bombed-out no-man’s-land that is either a hallucination or just the normal, absurd and timeless SNAFU of war.

People who Eat Darkness by Richard Lloyd Parry. Picked it up yesterday, finished it this morning. When a book is unputdownable, why fight it? You can probably tell from the title there are no kittens or lollipops in this book.

A Terrible Country by Keith Gessen. Wryly pitched and very close to home, this one migrates from my handbag to this pile with odd regularity, one chapter at a time. The Klein blue cover gives my eyes a rest, so it could be that, too. There’s a quote I want to tear out (except it would be sacrilege to tear out pages from books, and on such creamy paper too) and send to my long-suffering parents with my commiserations: ‘My parents had taken a great risk and undergone a great trial to bring me to a country where I could do, basically, anything I wanted. And what had I done? My friends from college and high school were now doctors, lawyers, bankers . . . whereas I had chosen to read books.’

The Age of Louis XIV by Voltaire. Owing to a quirky nineteenth-century format and the lovely hard green leather cover, perfect for wedging flat into the trolley and keeping the pile above it mostly level. Useful where it is, and therefore strong chance of remaining ‘unread by me’.

The Diary of a Provincial Lady by E. M. Delafield. These green Virago classics are excellent for always being reliably well-written, but when read in bed have a decidedly soporific effect. I also happen to hear this book in the wry and well-brought up voice of my dear mother-in-law, which contributes something, I don’t quite know what.

Riddley Walker by Russell Hoban. Not one for tired-brain reading. Back to the commute pile you go.

Pure by Andrew Miller. TBR, see The Eitingons, below.

Danubia by Simon Winder. After a day of complex apocalyptic feelings, what one really wants is a history book that makes one chortle like a maniac every time one dips in, and irritatingly read parts out loud to whoever happens to be reading in bed next to one.

The Eitingons by Mary-Kay Wilmers. Alas, once more ‘unread by me’, but hey, the night is young.

This is Going to Hurt by Adam Kay. It did hurt, but I have a thing for gallows humour. In fact, all the women-in-labour stuff reminded me of blackly joking my way through a tedious (by which I mean horrible, but with stiff upper lip) procedure involving overhead lights and people with sharp objects, some years ago. Afterwards, the anaesthesiologist popped in expressly to tell me that mine was the most entertaining caesarean he’d had in years, but could I forgo mentioning his saying so to anyone as it was probably unprofessional to guffaw at witty repartee from a patient whom you’ve just impaled with a needle as big as a fire hose.

Way back of back row, unseen:

Clever Polly and the Stupid Wolf by Catherine Storr, because it’s terribly good and uses many delicious adverbs, and suggests quite plausibly that the best and truest art is about food, and also because I’ve been reading it out loud to the kids and the eldest would shamelessly read ahead if I didn’t hide it. We shall enjoy it together, Clara, damn your eyes. Or. Not. At. All.

A Plain Cookery Book for the Working Classes by Charles Elmé Francatelli, late maître d’hôtel and chief cook to Her Majesty, the Queen. Extremely stimulating reading, good for counting one’s blessings, not good for falling asleep with visions of sugarplums. Recipes range from the straightforwardly nutritious Rice Gruel (a Remedy for Relaxed Bowels), Baked Bullock’s Heart, and Sheep’s Pluck, to the helpfully Economical Pot Liquor Soup (not soup with tequila, as one might hope, but soup made from the spent leavings of previous soup), see also A Cheaper Kind of Chicken Broth (contains detritus of chicken) and Thick Milk for Breakfast (whey mixed with flour, ‘well adapted for the breakfast of women and children and far preferable to a sloppy mess of tea, which comes to more money’, to the frankly ambitious Pudding Made of Small Birds (‘Industrious and intelligent boys who live in the country, are mostly well up in the cunning art of catching small birds at odd times during the winter months . . .’) and the finger-licking Baked Goose, Baked Cod’s Head (‘. . . a few oysters here would be an improvement’) and Yorkshire Pudding, which recipe hath never failed me yet, nor the Cod’s Head either. 2019 may well be the Year of Baked Goose.

Two more book-crammed shelves below the above, full of dubious treasures such as Paul McKenna’s I Can Make You Thin (you can’t, Paul, not if after fifteen pages you’ve been banished to the back row and sandwiched between two cookbooks), but also assorted Dumas x3 – emergency rations, always good in a hurry (my grandmother, who put The Three Musketeers – clothbound hardback with ribbon, thanks very much – into the hands of an impressionable four-year-old with the words ‘If you’ve run out of things to read, try this one’ really should bear the brunt of the blame referred to in the parental disappointment quote above), Dickens x2 – emergency rations, always good in a hurry, Shirley Conran’s Lace – still a great read for scraping your brain clean of troubles, like a razorblade made of lemon sherbet, Ian Banks’s The Algebraist for re-reading, Subtly Worded by Teffi (trans. Robert Chandler et al.) for re-reading also, a hot water bottle – winter is coming, time to ramp up the life support, and sixteen back issues of the New Yorker.

To my husband who is reconciled to his Sisyphean task and mostly uncomplainingly builds shelves for my books. To my children – now I’ve taught you both to read and to love reading, will you kindly piss off and let me finish this book? 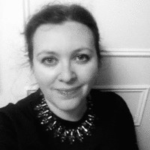 Ilona Chavasse spends a lot of time hiding out in places, reading. In time left spare, she is Head of Rights at Unbound and a translator from Russian. She enjoys books that feature hordes of characters, convoluted plots, atmospheric settings, dystopian futures, musketeers, interstellar travel, the long 18th century, erudition, wit, and the Oxford comma.
@MissAdaDoom
Tags :
Books by my bed Dickens George Saunders Ikea reading