By Amy Kean
Q&A | 4 minute read
What do Bram Stoker, Roald Dahl and Paul Beatty have in common? They all fuelled Amy Kean's imagination in different ways. She talks about what she reads, how she writes, and seminal influences, from Gothic horror to children's stories.

Joe & the Juice on Regent Street, at least twice a week. I order their Choco Shake with a shot of espresso and a turkey sandwich, and sit next to the plug point for hours. The free WiFi, excessive energy of the beautiful staff who high five each other constantly and wonderful diversity of clientele always puts me in a creative mood. Retreats for You in Sheepwash is where I go when I need a week of hardcore writing with zero distractions and supreme sustenance.

A poetry book I’ve been carrying around in my bag called Fondue by A. K. Blakemore, which I read on the tube most days. I think the sign of a good poem is when you can’t imagine how the hell it happened in someone’s brain and it makes you blink in awe, which Fondue does for me. Othello at the Globe this summer with Mark Rylance was unforgettable and I went to a weird immersive interactive virtual reality production about dreaming called Somnai that gave me nightmares for weeks.

Dracula by Bram Stoker. I was eight when I first read it which was probably a bit early, but it threw me into a world I quickly became obsessed with; this horrific romanticism that finds its way into a lot of poems I write. I watched Twin Peaks at the age of nine and read the accompanying diary, which again was likely premature, but I loved it. Laura Palmer is an odd early role model to have, but I think her combination of perfect on the outside and irreparably damaged on the inside intrigued a whole generation of women.

The story behind The Sellout by Paul Beatty convinced me to turn my hobby of writing into a serious, legitimate (future) career. That it took him ten years to create such a work of perfection, and that such a work of perfection was turned down eighteen times made me appreciate how self-belief and perseverance can eventually make amazing things happen. My first book is very different to everything else I write, but in each piece of prose I’ve produced in the last few years I’ve strived to be as funny and original and real as Beatty.

My house is filled with stationery I’ve never used and notebooks I’ve bought intending to chronicle my innermost thoughts, but then after a paragraph of scrawling my hand hurts and I give up. I carry my laptop with me everywhere I go, just in case I manage to find a spare ten minutes to get some writing in.

I’ll re-read non-fiction, because I often forget the important parts. I‘ve re-read The Chimp Paradox because it’s so helpful. To tame the emotional part of your brain – your chimp – you’re supposed to give it a name; mine is called Margaret. And poetry collections, of course, are written to be read thousands of times.

Matilda is my favourite fictional hero, and Roald Dahl the greatest storyteller that ever lived. And as for best villain . . . well, God killed an awful lot of people in the Bible with floods and plagues and things, and then got another man’s wife pregnant, and then killed his own son. I was forced by nuns to read both Old and New Testaments at my Covent secondary school and much of it felt mean and unnecessary. Spiteful, even.

About twenty-five years ago. Largely because I can’t be trusted with other people’s property.

Have you ever lied about reading a classic?

I’ve read the first and last page of Catcher in the Rye, and I just pretend I’ve read everything in between.

Finally, what’s the elevator pitch for the book you’re working on/ publishing?

The Little Girl Who Gave Zero Fucks is a feminist fairytale and ode to everyday bravery, written for women and girls who worry too much. It looks like a dystopian Milly-Molly-Mandy, reads like a candyfloss trip to the fair and covers painfully serious issues that all girls face. 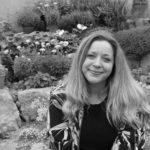 Amy Charlotte Kean is an advertising strategist, lecturer and writer from Essex. Her stories, rants, reviews and poems can be found on many sites including The Guardian, Disclaimer, Shots, Litro, Ink Sweat & Tears, Barren and the Drum.
@keano81
Tags :
Q&A