‘I have no interest in heroes and villains’

By Glenn Skwerer
Q&A | 4 minute read
Unbound author Glenn Skwerer on what he reads, how he writes and his novel on Hitler's childhood friendship, The Tristan Chord

Usually at the library. If I need other books and papers within reach while writing and the library carrel won’t do, I write propped up in bed surrounded by the research material. In this case, the dogs are banned from the room.

The Portrait of a Lady by Henry James. There are many passages in which James summarises action and explores the shifting attitudes and mental states of his characters, often in long, convoluted sentences with rather eccentric phrasing (I wonder whether he was a lawyer in another life);  these alternate with scenes that consist almost entirely of dialogue. The characterisation is brilliant, the dialogue simply terrific. If you really want to get to know a character read a nineteenth-century novel.

As a teenager I was nuts about Joseph Heller’s Catch-22, which was enormously popular at the time. I liked the wonderfully absurd humour, the subversive nature of the story, and the book’s elliptical structure.

I made a deal with my tenth-grade English teacher: if I persuaded Heller to grant an interview and wrote a paper about the book using his answers, she’d excuse me from coming to class for a entire quarter. I did manage to reach Heller, who was generous with his time; he told me he no longer had any use for realistic fiction and was steeped in Beckett’s novels. He talked a lot about this. Before he died I read a piece in which he mentioned that he’d just spent a summer reading nothing but Dickens – all of Dickens. So tastes do change.

This is an odd question for me, because I’m not a writer, I’m a physician. That identity is branded into your hide after nearly ten years of training. Also, I find it terribly inhibiting to think of myself as ‘a writer’ while writing.

The better question is why I chose to write the book I did. In short, I read August Kubizek’s 1953 memoir, The Young Hitler I Knew: The Memoirs of Hitler’s Childhood Friend, about his four-year friendship with the adolescent Adolf Hitler, which culminated in the two of them sharing a tiny room in Vienna for six months. I decided I’d invent a new narrator, more self-aware than Kubizek, and re-write the book as fiction. Fiction was the better way to explore the mental attitudes of the characters and the underlying conflicts in that friendship, among other things.

If I had to choose two books that in recent years impressed on me how powerful storytelling can be, they would be Continental Drift and Affliction, both by Russell Banks.

I re-read parts of books, and re-listen to some books.  The visual and tactile world of a book really comes alive with a good professional reader, often an actor. Life’s still too short.

I have no interest in heroes and villains. The most interesting characters – and everyone I’ve met in my life – are a mix of good and bad traits. And this is lucky for fiction, because fiction thrives on conflict, including (or especially) internal conflict. If I had to choose a convincing ‘villain’, it would be Iago. A convincing hero or heroine? Dorothea Brooke. I’m not the first to say that.

This morning. I take a lot of books out of the library, either for research (relating to fiction) or just for reading. With fiction, I have an informal forty-page limit:  if I’m not engaged after forty pages, that’s it for me. I return a lot of books.

I don’t lie about reading books, or having read them. I don’t care what people think. Since I’m a doctor people assume I just don’t have the time. They’re wrong.

Elevator pitches are for movies, not books. 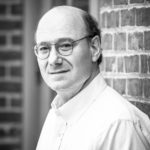 Glenn Skwerer is a psychiatrist who specialises in the treatment of patients suffering from the psychiatric aspects of Parkinson’s Disease, Alzheimer’s and other dementias, and some neurologic conditions, as well as simply growing old. He lives and practices in Boston. His first novel, The Tristan Chord, is published by Unbound (photo by Erica Derrickson).
@gskwerer
Tags :
Q&A