read on
Photo by Stefan Cosma/Unsplash

The loneliness of medieval kings

I conjure thoughts for my translation work while out riding and visiting historic buildings and landscapes on Gringolet, my old 1958 Francis Barnett motorcycle. Much of my translation work is spent at the kitchen table, with additional table time spent cutting the linocut prints which illustrate my work. The linocuts themselves are test-printed in the garage before I produce them properly using a 19th Century Albion Press at the Curwen Print Studios in Cambridgeshire or at the Stoneman Press in Essex.

I read more non-fiction than fiction. Of all things, I’m really enjoying Wuthering Heights at the moment, following a trip to the Bradford Literature Festival, but I was also transfixed by Cosey Fanni Tutti’s brutally frank and honest autobiography, Art, Sex, Music (Faber). I saw a great play at the National a few years back, 3 Winters, written by Tena Stivicic which was simply stunning in scope, darkness and emotion.

An image from a book haunts me: an author in a darkened cave, sitting on a chair made of unsold copies of his own book

Titus Groan by Mervyn Peake stands out in the mind. In the final book, from memory, there is an image which still haunts me: an author in a darkened cave, sitting on a chair made of unsold copies of his own book. Says it all, really! Have a care!

I was deeply influenced by the romantic poets, in particular John Keats. How could such people know such emotion so young – and express it? And then there’s always the Gawain-poet. Shakespeare’s philosophical edge and Dickens’ attention to detail were also highly influential. And then there’s the child’s historian RJ Unstead, who had a quirky tone to his work at times, and the whimsical approach of castles historian, R Allen Brown.

I work a lot with my hands so, out of choice, I would use a fountain pen. However, the laptop has to be the tool for speed, convenience, and making life easier for the publisher!

I don’t re-read fiction (except for poetry) because often a literary discovery is so often disappointing the second time round. But I can visit non-fiction time and again – it must never be said that fact is finite, only that it assists in the arrival at conclusions.

Oh, Mr Pickwick or Sam Weller (Charles Dickens). What joyous folk they are. Villains? Steerpike (Gormeghast) – who then makes Mr Flay a hero, doesn’t he?

Last week. I tend to visit for finding out about local history in particular.

What is the point of lying about reading something you’ve not read? I’d rather be known as someone who openly says they are not well-read than to be seen as a fraud. Besides, if someone knows you’ve not read something, they’re more likely to tell you why they like it. A conversation built around a lie can only ultimately end in disappointment for all concerned.

King Arthur’s Death [which I am currently working on] forms part of the English Alliterative Revival of the 14th century. Second only to Sir Gawain and the Green Knight, it is a 4,500 line poetic masterpiece which details the loneliness of kings, the horror of war and has a deeply subversive way of thinking which challenges the great romances of the time. Like with my translation of Gawain, I’m working from the original Middle English and will be illustrating it with over 30 original linocut prints. It will ooze the dark heart of an England tired by foreign wars and wearied by an indifferent London. It so much speaks of today! 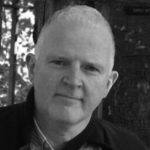 Michael Smith comes from Cheshire and read history at the University of York, specialising in English and European mediaeval history. In later years, he studied as a printmaker at the Curwen Print Study Centre near Cambridge. His first book, a translation of Sir Gawain and the Green Knight, is published by Unbound in July 2018. His second, King Arthur's Death, is currently funding at https://unbound.com/books/king-arthurs-death/ You can find out more about his mediaeval-themed art and printmaking at www.mythicalbritain.co.uk
@MythicalBritain
Tags :
Q&A