From re-reading to not writing

By James Ward
Q&A | 6 minute read
'My book is a collection of interesting people writing about boring subjects' - James Ward explains how he writes, and all the many and varied ways of not doing

Anywhere and everywhere. Generally at home on a slightly wobbly desk in my bedroom. If my flatmates are out, then I may extend into the front room. Normally, I’ll be listening to some polite and unobtrusive music by Brian Eno and drinking peppermint tea. If I’m rewriting something or what I’m working on doesn’t require me to use the internet to research anything, then I’ll go out and find somewhere without wifi. I don’t have the willpower to stop checking Facebook or Twitter unless I am physically unable to connect to the internet. Although that just means I keep staring at my phone instead.

This is going to sound like I’m just saying this to appease the overlords at Unbound, but I was listening to a recent episode of Backlisted and was introduced to the work of Ann Quin by Jennifer Hodgson (editor of the Quin anthology The Unmapped Country). Berg is such a curious work, and has perhaps the greatest opening line in history: ‘A man called Berg, who changed his name to Greb, came to a seaside town intending to kill his father.’ That knocks out my previous favourite by Mickey Spillane (‘The guy was dead as hell’ from Vengeance is Mine).

As with everything in my life, nothing has gone according to plan. My life is a series of accidents, bad decisions and rapid acts of post-rationalisation to make it seem like whatever just happened was the plan all along. I never really decided to become a writer and I’m not really sure if that’s what I am. I do writing (a friend once introduced me to someone at a party by saying ‘This is James, he writes things down’ and I think that’s probably as an accurate description of my relationship to the world of literature as you’ll ever get). I think the books that probably had the most profound impact on how I write would be things like The Kandy-Koloured Tangerine-Flake Streamline Baby and The Electric Kool-Aid Acid Test by Tom Wolfe, Style Wars by Peter York, The Philosophy of Andy Warhol: (From A to B and Back Again) by Andy Warhol and A Year With Swollen Appendices by Brian Eno. I suppose it’s sort of fitting that the books that inspired someone who doesn’t consider himself a writer to become a writer are a series of books that were never really originally intended to become books and are mostly collected essays, articles and diaries.

Both. I do the bulk of my writing on a laptop, but it’s very much a case of quantity over quality. Once I have a draft, I then print it out and scribble all over it. Crossing things out, moving things around, changing words, making stuff tighter, adding jokes. For particularly difficult or unwieldy bits, I abandon the written word entirely. I like to go on long walks and normally I’ll be thinking about something else entirely when suddenly something pops into my head and then I’ll record it as a voice memo on my phone. I should probably go and delete most of those messages because if anyone else ever heard them, they’d think I was a lunatic.

All the time. Unlike Burgess Meredith’s character in the ‘Time Enough At Last’ episode of The Twilight Zone, I’ve accepted that I probably won’t live long enough to read everything that has ever been written. There are certain books that I return to over and over again, always discovering something new in them: Species of Spaces inevitably, Style Wars, City: Rediscovering the Centre by William H. Whyte, The Individual in a Social World by Stanley Milgram, A Year with Swollen Appendices. Repetition is a form of change, as Eno once said.

The narrator and the unnamed ‘you’ in ‘The Day Before You Came’ by ABBA. I’ll let you decide which one is which.

Embarrassingly, I can’t actually remember. I have a great affection for public libraries – my first weekend and summer jobs were working in libraries in the borough of Kingston (Kingston, New Malden, Old Malden, Tolworth) and I’d often be quite lenient and waive the 2p fine for being a day overdue. My main problem is that if I like a book, I want to own it and don’t like having to give it back (see answer above). So you’re much more likely to find me in a second-hand bookshop (Bookmongers in Brixton is probably my favourite not least because they have a beautiful and friendly dog) than a library.

So many. Seriously. I’m one of those people who reads more non-fiction than fiction, and so there are massive gaps in my literary checklist. I simply nod and make non-committal noises whenever I end up in a conversation about something I’m expected to have read. A lot of stuff you just pick up through cultural osmosis anyway. At least enough for you to be able to make a flimsy yet salient joke. Generally, people are reluctant to call you out because they’re bluffing too.

Finally, what’s the elevator pitch for the book you’re working on?

The book is a collection of interesting people writing about boring subjects. Each essay focuses on a subject that, quite rightly, most people would never even give a second thought to, but hopefully by the time you get to the end, you’ll reconsider and think about in a new way. You’ll learn a lot of interesting things, but none of them will be of any use. Please do pledge to support this book, but you don’t have to bother reading it. 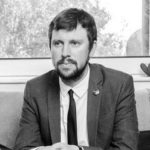 James Ward is a London-based writer and is the founder of The Boring Conference - a one-day celebration of the mundane, the ordinary, the obvious and the overlooked. He is the author of Adventures in Stationery: A Journey Through Your Pencil Case, and the presenter of the BBC podcast The Boring Talks.
@iamjamesward
Tags :
Q&A