Somewhere far-flung if I can. I have a romantic notion that I write better in the mountains or by the sea or in the desert. It turns out to be true; a self-fulfilling prophecy perhaps. That said, the inconvenient truth is that I can write absolutely anywhere. When I’m home I write in my study, while drinking gallons of tea and eating oversized packets of crisps. If I’m really under pressure I head out — to the British Library for silence or a coffee shop for buzz.

I just finished The Lacuna by Barbara Kingsolver. I adored The Poisonwood Bible and chose to read this book now because the big Frida Kahlo exhibition is opening at the V&A  — and Kingsolver’s story is set in Kahlo and her husband Diego Rivera’s home in Mexico. It’s a brilliant book, expertly and evocatively written.

Last week my mother-in-law took me to see La Traviata in Holland Park, a rare treat. The set design was outstanding — like a series of pastiches yet somehow so original too. The soprano Lauren Fagan was extraordinary; she had to sing almost non-stop throughout the entire production. I have been tra-la-la-ing ever since.

I was hugely affected by The Endless Steppe by Esther Hautzig, a story told through the eyes of a young girl who is deported from Poland to Siberia during the Second World War.  The story had some personal resonance. My own mother and her family escaped from what was then Czechoslovakia in 1949 after the Communists invaded. But it wasn’t only the politics that drew me in. It was also the adventure; Esther fell in love with Siberia and didn’t want to go back home to Poland after the war. It’s a story of exile but also adventure, which added fuel to my desire to explore the world. I chose journalism as a career to allow me to wander.

Flying the Big Jets by Stanley Stewart. He was an airline pilot and a friend of my dad’s. The book is exactly what the title says it is — and explores what it feels like to fly a 747. But it wasn’t the subject matter that inspired me to become a writer. It was the fact that I knew someone published. Stan and his book made the world of authors and writing professionally less remote.

Both. I love writing with pen and paper but I loathe transcribing mostly because I can’t read my own handwriting. It takes me ages to decipher what I’ve noted down.

I used to but haven’t in years. A friend of mine told me that even if I live into old age, I’ll still only have time for about 500 more books. I panicked. There’s a shelf of unread books in my study which I add to faster than I can get to.

Jim in Joseph Conrad’s Lord Jim is a brilliant combination of both.

Today, but not for me. I borrow about 15 books at a time for my kids. The eldest is just starting to read but they’re mostly for me to read to aloud to them. There are always a few picture books for the little one but he mostly just chews the corners.

I lived in Xi’an, China in the mid-1990s where I was learning Chinese. I had pretty hopeless language skills at that time and didn’t know anybody who spoke English so I read voraciously. The only English language books in the local bookshops were the classics and cost the equivalent of about 20 pence. So I read all of them. More than once. It was heaven.

Finally, what’s the elevator pitch for your own book?

Set in the late 1800s, Song is the story of a boy who leaves his homeland of China to travel half-way around the world to the rainforests of British Guiana hoping to seek his fortune. Back then in the post-slavery years Song was called an indentured servant. Nowadays we’d call him an economic migrant. It’s historical fiction, yes, but Song’s story is just as relevant today. 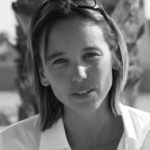 Michelle Jana Chan is an award-winning journalist and travel editor of Vanity Fair. She is also contributing editor at Condé Nast Traveller, a presenter and video journalist on the BBC’s The Travel Show and a writer for The Daily Telegraph. She was formerly a journalist at Newsweek and CNN International. Michelle has been named the Travel Media Awards’ Travel Writer of the Year. Her debut novel, Song, was published by Unbound last year: https://unbound.com/books/song
@michellejchan
Tags :
Q&A