My ambition is insatiable. Every success I achieve inspires a desire – and sometimes a need – to achieve more. I used to be embarrassed by my ambition and the ferocity of it. It felt unseemly, particularly as a woman, to want so much, to be naked in my desire for success. At the same time, I know that whatever success I may have achieved is a direct result of my drive and how I’m always, always reaching for more.

I have long been ambitious and competitive. As a child these instincts were honed by my parents who demanded excellence from my brothers and I. Their expectation was that our only job, as children, was to go to school and because that was our only job, it was our responsibility to excel. Fortunately, I took to school and being the best student I could be. I took real pride in exceeding teachers’ expectations. Report cards were not merely chronicles of my performance, they were evidence of the quality of the fruits of my young labour. Certainly, it was intense to live with so much pressure, and not for everyone I realize, but I thrived on it. I not only wanted to please my parents, I wanted to impress my teachers and classmates. I wanted to impress myself. And so I worked hard. I decided that perfection was the only option.

Writing has never been an indulgence. It is not a hobby. Writing has always been and is as much part of my life as breathing

But I try not to let the darker side of my ambition control me. I try to focus on the joys of success. I remind myself to not take anything I achieve for granted. And though I am incredibly ambitious, I am not so ambitious that success is the only measure of my happiness.

I am a writer and most of the time, when people talk about writing, they talk about the love of writing. Anything creative is, more often than not, a passionate pursuit rather than a realistic pursuit. Let me be clear – I love writing. It is one of my favourite ways to pass the time. The act of telling stories brings me a deep and genuine pleasure. I love being able to remake the world, or convey how I understand and move through the world, with words.

Writing is a sublime pleasure, but I have always taken myself seriously as a writer. As a child hunched over my typewriter, or in high school when I wrote the most melodramatic stories you could imagine, or in my twenties when I played the part of the deeply tormented writer, chain smoking in the dark of night as I sat at my computer, I took myself seriously. Writing has never been an indulgence. It is not a hobby. Writing has always been and is as much part of my life as breathing.

If anything, rejection provided a great deal of inspiration. ‘I’ll show them how much better I can write,’ I would tell myself

Instead, I thought about the excellence those magazines represented, how much I enjoyed reading them, and how I wanted to be good enough to be part of that excellence. I was rejected by those publications, and countless others, time and again but I was relentless. There were days when I received a rejection and immediately sent a new story to that same publication.

Wilful persistence is critical to any kind of success. I also tell these women to embrace their ambition, and to do so openly, vigorously, joyfully

Of course, I don’t recommend that tactic because it tends to irritate editors, but when I didn’t know better, all I thought was, if a given editor didn’t like the story I sent, surely they would like something else I’ve written. I always had something new to send because I was always writing. If anything, rejection provided a great deal of inspiration. ‘I’ll show them how much better I can write,’ I would tell myself. (This is something I still tell myself when I encounter rejection.) Every rejection became another opportunity for me to try again. When rejections came with feedback, I read that feedback several times and then, once I got over my feelings (rage, bitterness, sorrow, what have you), I revised my work because more often than not, the feedback I received was thoughtful and in the best interest of my work. Sometimes, when I submitted that revised work, it met with acceptance and those acceptances were the most satisfying because they were hard-earned. They offered professional redemption. They allowed me to believe that I was, indeed, good enough to be a writer.

People, and women in particular, often ask me for advice on either how to make it as a writer or as whatever they are passionate about. I tell them to be committed, because half-hearted efforts will get them nowhere, to take themselves seriously even if no one else will, to be undeterred in the face of rejection or setback, to be always willing to learn, to know how to take constructive criticism and to know when not to take criticism, to believe in the value of what they have to offer, to be relentless. This last thing, I stress the most. Wilful persistence is critical to any kind of success. I also tell these women to embrace their ambition, and to do so openly, vigorously, joyfully. Though external validation has always helped keep the fire of my ambition stoked, I have never looked to anyone for permission to be ambitious, to be open about what I want for my career, for myself. Embracing my ambition has been one of the greatest gifts I have ever given myself.

Life Lessons from Remarkable Women: Tales of Triumph, Failure and Learning to Love Yourself by Stylist is published by Penguin Life (£9.99) 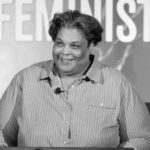 Roxane Gay is an American writer and academic who has broadened our preconceptions of what it means to be a feminist and what it is to be a woman. Author of 'Bad Feminist', 'Difficult Women and Hunger: A Memoir of (My) Body,' Gay argues that women shouldn’t have to struggle to live up to feminist ideals, and highlights the extreme discrimination experienced by minority women. Lecturing in English, she is a contributing writer for The New York Times and has also written for Harper’s Bazaar, McSweeney’s, Virginia Quarterly Review and many others. Her TED talk ‘Confessions of a Bad Feminist’ has received over one million views online (Photo by Charley Gallay/Getty Images for Vulture Festival).
Tags :
Extract