read on
'My mum first read 'The Lion, The Witch and the Wardrobe' to me and I was completely blown away' (Photo by Popperfoto/Getty Images)

By Louise Doughty
Shelfie | 5 minute read
In the latest of our Shelfie Series, the bestselling author talks about diversity on her bookshelves, buying her first children's story and why she never lends books

Can you remember the first book you bought?

Yes, very much so.  I had been an avid library goer the whole of my childhood but I remember saving up my pocket money pennies to buy the whole series of Narnia books by C. S. Lewis. We didn’t have a proper bookshop in the small town where I grew up but the local newsagent had one wall of books. Going in and handing over my money from my little clip-top purse for a book that would then be mine to keep – that felt like a really significant moment. Later, a good second-hand bookshop opened up and I was in there all the time, browsing. I was given a book token as a school prize and went in, and after about three hours of trawling the shelves, bought The Collected Works of Isaac Rosenberg, a beautiful hardback that included prints of his oil paintings as well as his poetry. It became a prized possession.

How big is your library now?

Too big! Maybe it’s a consequence of that early excitement of owning books but I’ve collected far too many over the years. Recently, I’ve tried to cull but it’s like pulling my own teeth out with pliers. I do have a kindle as well and try to buy e-books rather than a hard copy when I just want to check something. It ain’t the same though.

I have one wall of fiction and one wall of non-fiction. The fiction is in alphabetical order by author. The non-fiction is organised according to subject matter. There are also smaller shelves of poetry and drama and they are just higgledy-piggledy. Oh and short story anthologies and literary criticism are separate too.

In terms of home-grown diversity, our literary culture has to do a lot better. Yes we have Zadie Smith, Andrea Levy, but what we seem to have lacked historically is real encouragement for new writers from diverse backgrounds

I don’t really have one. I like reading in bed at night but am usually too tired to do it for long. As I have a family, I tend to associate the sofa with the television at the moment. There’s an easy chair in the kitchen that is probably my favourite spot, although I face stiff competition for that from two cats.

How diverse is your bookshelf?

Not as diverse as it should be. I’m making a concerted effort to read more fiction in translation – my most recent was Ghachar Ghochar by Vivek Shanbhag, which was one of my ‘books of the year’ last year. Writing from India is a lot more than Rushdie: Amitav Ghosh, Aravind Adiga and Chetan Bhagat all give quite variant views of India, and the new wave of Pakistani writers, such as Kamila Shamsie and Mohammad Hanif, is very exciting. Hanif’s first novel, A Case of Exploding Mangoes, is terrific. When I was researching my latest book, Black Water, I tried to educate myself about Indonesian writing: Leila S Chudori, Eka Kurniawan, Laksmi Pamuntjak – and the grandaddy of them, Pramoedya Ananta Toer. But the more you read, the more ignorant you feel, often. In terms of home-grown diversity, our literary culture has to do a lot better. Yes we have Zadie Smith, Andrea Levy, but what we seem to have lacked historically is real encouragement for new writers from diverse backgrounds up the treacherous snakes and ladders game of literary reputation.

I’ve recently started a crowdfunding campaign for a scholarship for BAME writers to attend the MA in Creative Writing at the University of East Anglia. It was a course I did myself in the 1980s and it was transformative in terms of giving me practical experience of being a working writer within a group of writers and access to a kind of contemporary literary culture I had never experienced before. We’re nearly fully funded for three complete scholarships, fees and living expenses, and most of the money has come from other writers who share my concern. I’m very excited.

Break the spine! Definitely. Books are there to be consumed. I would regard any of my books being ragged as a great review

I had a big purge last year when the new shelves went up. I keep promising myself that from now on it’s one in one out – but so far it’s not working out quite like that…

In London I love Primrose Hill Books, Daunt on Marylebone High Street, West End Lane Books – and then Toppings in Ely which I visit whenever I go there. I also actually do like the giant Waterstones on Piccadilly – there is something very heartening about what used to be a whole department store now devoted to books. If you got locked in, there’s no danger you’d be bored.

What’s on your ‘to-read’ pile?

It’s vast! I’ve just been sent The Unwomanly Face of War by Svetlana Alexievich, which I really want to read, and fiction-wise I want to catch up with Station Eleven by Emily St John Mandel – but they are just the top books on two teetering piles. One life is not enough.

Break the spine! Definitely. Books are there to be consumed. I would regard any of my books being ragged as a great review.

Very rarely. And I always regret it when I do. They are mine. I get quite possessive about them. People can go out and buy their own – they are incredibly cheap these days, after all. 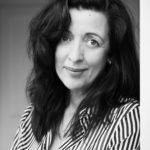 Louise Doughty is the author of eight novels, most recently Black Water, which was published in 2016 to critical acclaim in the UK and US where it was nominated as one of the New York Times Notable Books of the Year. Her previous book was the Top Ten bestseller Apple Tree Yard, adapted for BBC One as a four-part series starring Emily Watson. Her sixth novel, Whatever You Love, was shortlisted for the Costa Novel Award and longlisted for the Orange Prize for Fiction. She has also won awards for radio drama and short stories, along with publishing one work of non-fiction, A Novel in a Year, based on her popular newspaper column. She is a critic and cultural commentator for UK and international newspapers and broadcasts regularly for the BBC. She lives in London (Photo by Yves Salmon.)
@DoughtyLouise
Tags :
Shelfie BAME writers

How to find a collective voice? A writer of South Asian heritage reaches for Amrit Wilson's seminal book.