Book of a lifetime: John le Carré’s A Perfect Spy

By Clare Morrall
Book of a Lifetime | 7 minute read
The world of spying, where nothing is as it seems, creates a fertile environment for an examination of identity, argues Clare Morrall

So. The book of a lifetime. I’ve been asked for this before. Would it be dishonest to choose a different book this time? What price integrity, loyalty to earlier declarations, promises made in my youth (well, a few years ago, anyway)? I have scanned my bookcases, found other books I love – The Grapes of Wrath scored highly here, but ultimately failed because in my old age I’m less inclined to be stirred by an agenda, however worthy – and in the end, I can’t come up with anything more impressive than John le Carré’s A Perfect Spy.

I rarely read books more than once – there’s never enough time – but I’ve made an exception for this one. When it was chosen by my book group, I re-read it, loved it all over again, and confidently expected unanimous approval. But – they thought it was boring. I highlighted the intelligence of the writing, the narrative drive, the rich cast of characters, the humour. They were not persuaded. It turns out that we don’t laugh at the same things. It was puzzling – it still is. This is a remarkable novel with great depth of understanding, and it’s stayed with me for many years. How could they fail to see its quality?

There’s an authenticity about the voices. They talk like real people, rambling, exaggerating, slowly revealing themselves

The story is not straightforward. It doubles back on itself, slithers from one character to another, never rooted in one place or time period, always telling us that the present cannot exist without the past, that the future will never happen without the present. Even the tenses are unpredictable – why is a flashback in the present, when the overall narrative is in the past? Is there a logical pattern? Does it matter? There’s an authenticity about the voices. They talk like real people, rambling, exaggerating, slowly revealing themselves. Magnus Pym, the perfect spy of the title, is writing the history of his life for his son Tom (who he loves without reservation), sometimes addressing him directly, sometimes writing about himself in third person.

Magnus goes missing and he has to be found. This is the framework around which everything else, the backwards, the forwards, the dissection of personality, is constructed. Because Magnus is a man who faces both directions at the same time, a double spy. He’s been playing an elaborate, deadly game in the shadows, a game that involves real lives, where people can be tortured or die, where even the participants don’t really know what’s going on.

In the course of this search, we meet Rick, Magnus’s father, a cartoon of a parent, magnanimous, crooked to the core. As a child, Magnus experiences brief moments of Paradise within Rick’s court, entertained by the hangers-on, the ‘lovelies’ and the ever-loyal Sid Lemon. The Fall inevitably comes – ‘a temporary problem of liquidity’ – when police Wolseleys replace the Bentleys on the drive, followed by Purgatory and the mysterious absence of his father. According to the whispers, he’s on holiday, losing weight, reading books about the law. He eventually comes bouncing back, as always, and his clinging presence – ‘do you love your old man?’ – echoes through Magnus’s life until he dies and triggers Magnus’s final breakdown.

Then there’s Axel, codenamed Poppy, the sad, tortured man of uncertain nationality, who befriends Magnus in the early days. ‘Axel comes from druben’, (it means ‘over there’) – ‘druben being across the border, druben being those irrational tracts of Europe that were not Switzerland, where people rode in tanks instead of trolley-buses, and the starving had the ill manners to pick their food from rubble instead of buying from shops’. Magnus, manipulated by the sinister Jack Brotherhood, reports him, then stands and watches when the authorities come for him. But Axel returns to claim him. ‘Sir Magnus, you have in the past betrayed me but, even more important, you have betrayed yourself. Even when you are telling the truth, you lie. You have loyalty and you have affection. But to what? To whom? You are a perfect spy. All you need is a cause.’ The boundaries are becoming uncertain; shame, guilt and loyalty overlap; there are no clear edges.

It’s hard not to like these flawed characters, even when we suspect we shouldn’t. Mary, Magnus’s wife (‘She’s a top Martha, Axel. She’s beautiful and rich and frightfully British’), who accompanies him through his stellar career, understands him, distrusts him and loves him. Jack Brotherhood, who recognises Magnus’s potential immediately, who recruits him and believes in him, loves him.

Everyone loves Magnus. Love is the fundamental truth that drives this novel. A binding love that goes deeper than reason, has no need for outward expression and demands absolute loyalty. It leads to startling sacrifices.

The world of spying, where nothing is as it seems, creates a fertile environment for an examination of identity, a subject that fascinates me. The multiple faces on display for public consumption; the person we believe ourselves to be; the uncertainty that’s buried beneath all of that, probably not fully understood even by ourselves. Magnus, the perfect spy, remains all things to all men, until he unravels and fragments. ‘Like Rick, he was learning to live on several planes at once. The art of it was to forget everything except the ground you stood on and the face you spoke from at that moment.’ The writing of himself in third person becomes significant. He is not the man he is writing about – and yet he is. He is both the writer and the subject.

This is an alternative world that exists alongside our own, with its own rules and its own language – the Circus, lamplighters, the joes. Le Carré never explains the terminology – he believes in the intelligence of his readers (an excellent ruse – make the reader feel clever). And within all of this is a very English humour: ‘We are born, we get married, we divorce, we die. But somewhere along the way, if we get a chance, we should also stand as Liberal Candidate for the ancient fishing and weaving constituency of Gulworth North situated in the remoter fens of East Anglia in the unlit post-war years before television replaced the Temperance Hall, and communications were such that a man’s character could born again by removing it a hundred and fifty miles north-east of London.’

Le Carré has confirmed the autobiographical nature of the novel, so we know it’s not fantasy, and none of us should remain locked into our small lives

Can this quality of writing ever be boring? We discussed it at length in the book group (although much of this discussion involved me quoting dazzling passages in an attempt to convince them they were wrong), and I can’t remember all the arguments, but there was a clear lack of engagement. I’m still trying to make sense of this. Did they find the novel too far-fetched, too distant from their experience of daily life? But le Carré has confirmed the autobiographical nature of the novel, so we know it’s not fantasy, and none of us should remain locked into our small lives – that’s why we read, surely, to learn, to experience. Does their failure to be moved reflect the world’s ever-increasing hunger for surface emotion, its belief that public figures have to produce genuine tears and the language of sentimentality to prove they’re caring? Or could it simply be that too many of the characters are men, even though there are several well-rounded women – people who say what they want to say. My group consists of intelligent, educated women. Why was their appetite for psychology, for insight, not satisfied by the novel?

Maybe the truth is that the novel needs to be read more than once, or even studied. I’ve investigated old newspaper reviews – a sizeable number of distinguished people consider the novel to be a masterpiece – and some of them only recognised its true value after coming back later for a second read. But, in the end, perhaps I just have to accept that art is complicated and nobody ever agrees about anything. That’s okay. I’m not going to change my mind. If opinion has to be divided, I know which side I’m on.

Clare Morrall’s new novel, ‘The Last of the Greenwoods’ is published by Sceptre 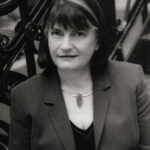 Clare Morrall's first novel, Astonishing Splashes of Colour, was published in 2003 and shortlisted for the Man Booker Prize that year. She has since published the novels Natural Flights of the Human Mind, The Language of Others, The Man Who Disappeared, which was a TV Book Club Summer Read in 2010, The Roundabout Man, After the Bombing and When the Floods Came. Her most recent novel, The Last of the Greenwoods (Sceptre), is published in April 2018. Born in Exeter, she now lives in Birmingham. She works as a music teacher, and has two grown-up daughters.
Tags :
Book of a Lifetime John le Carre