‘A Bargain With the Light: Poems after Lee Miller’ by Jacqueline Saphra; review

By Bidisha
Review | 4 minute read
A poet's contemplation on an extraordinary photographer, as well as the ethics of photography itself

Lee Miller has always been a compelling, mercurial figure: the lover of great men; the raped child and the self-determining woman; the fashion plate and the war photographer; the passive object and the active artist; a target of envy and belittlement, then admiration and appreciation; an instinctive reportage photographer and a calculated studio artist; a playful surrealist and an unflinching realist.

A Bargain With the Light is poet Jacqueline Saphra’s contemplation of the photographer, and it comes in a limited edition of three hundred copies, with fourteen images by and of Miller accompanied by fifteen sonnets by Saphra.

The sonnets are neat yet wide-ranging, fitting together solidly, like tiles, to form an examination of Miller’s upbringing, her personal and artistic sensibility, her allure and her achievements.

Saphra writes sometimes as an observer, sometimes as Miller herself, sometimes with ironic speculation. Yet she always keeps full faith with her subject. She is as skilled a psychologist as she is a poet, showing how the trauma of Miller’s childhood became a strange part of her outward allure and later an inner inoculation against breakdown during her years as a war reporter. Shadows of objectification, abuse and violation run through the sonnets, as do state violence, the horror of Nazism and the hollowness of physical beauty.

Raping someone and photographing them both involve objectification, control and domination, Saphra makes clear

The first three photographs are invasive, unpleasant images of a stripped Miller, two taken by her father and the third by her early mentor, the artist Man Ray. Saphra shows how Miller’s childhood rape by a family friend ‘split your life apart and cracked your childhood’ (‘Happy Families’). Miller becomes elusive, she ‘can’t be clean’ (‘Who Gives a Damn?’), she is ‘difficult to find’ (‘Strip’), always looking ‘beyond’ and signalling ‘absence’ (‘Darkroom Lessons’). Perversely, this withdrawal and negation are a part of her beauty.

Raping someone and photographing them both involve objectification, control and domination, Saphra makes clear: Miller’s father ‘said strip, and so you did’ (‘Strip’), writes Saphra sympathetically to the child Miller, warning that posing will ‘leave you wide open to the light’ (‘Darkroom Lessons’). A male artist directing her in the studio ‘puts you in position’ (‘In The Shadows’) even while Miller is haunted by ‘the tongues and hands of all your ghosts’ (‘Sluiced’). The male gaze is repulsively dehumanising: ‘loose-eyed, lewd, he doesn’t give a damn: the artist wants you for your skin’ (‘The Art of Control’).

When Miller herself gains agency within photography the images and the sonnets change radically. Miller’s photographs of women – a Nazi who has killed herself, a woman shamed for being a Nazi ‘collaborator’, multiple women in an enforced Nazi brothel, a fellow war reporter and an army nurse – are immediately arresting and utterly devoid of leering objectification.

The authority of her lines sheds light on the ethics and contradictions of photography as lie, as truth, as coercion, as revelation, as memorial

As Miller grows into her vocation as a creator rather than an object, Saphra’s language is galvanised by movement and appreciation. Miller pulls triumphantly away from the men who turned her into a doll: ‘he’s falling, you’re rising’ (‘In The Shadows’). She is ‘hungry for more action’ (‘Sluiced’). Miller the photographer is the type of woman who is never idle or concerned with her appearance – she will ‘fix my focus’ (‘Reading the Man’), ‘pull your boots off’ and ‘dump your clothes’ (‘Sluiced’), then ‘run the gauntlet of the world’ (‘Who Gives a Damn’).

Saphra is the author of a pamphlet and two poetry collections, The Kitchen of Lovely Contraptions and All My Mad Mothers. Her work is powerful and soulful, yet burnt through with irony and experience and given backbone by her critical insight. A Bargain With the Light once again displays the breadth of Saphra’s intelligence. The smooth, compassionate authority of her lines sheds light on Miller’s life and also on the ethics and contradictions of photography itself: photography as lie, as truth, as coercion, as revelation, as memorial; photography that can be dignifying or demeaning, depending on who wields the camera.

There is one off-note in the production values of this project, however. A Bargain With the Light is a flimsy thing printed on slippery brochure paper. Creatively, it is a work of high prestige and both Saphra and Miller deserve more than its cheap-looking presentation. Despite this surface failing, the brilliance of Miller’s photography and the compassion, artistry and insightfulness of Saphra’s bold new sonnets are undeniable.

*Jacqueline Saphra is shortlisted for the T. S. Eliot Prize for her collection, All My Mad Mothers.

Bidisha’s Unbound choice is Girl with a Gun 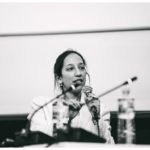 Bidisha is a journalist, critic and broadcaster for the BBC, Channel 4 and Sky. She does outreach work in UK prisons, refugee charities and detention centres. In 2013, she became a trustee of the Booker Prize Foundation. Her fifth and most recent book is 'Asylum and Exile: Hidden Voices of London' (2015). Her poetry has been published by Wasafiri magazine, Seagull Books, Saqi Books, English PEN and Young MWA magazine and performed internationally; she reviews poetry for BBC Arts and Poetry Review and writes for The Guardian, The Observer and the Times Literary Supplement.
@Bidisha_online
Tags :
Review Lee Miller Poetry