Zippy and Me: The Remarkable Life in Puppets of Rainbow’s Ronnie Le Drew

By Ronnie Le Drew and Duncan Barrett and Nuala Calvi 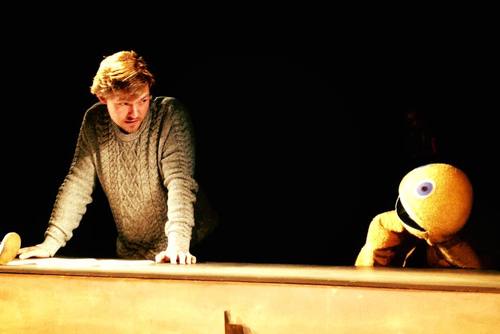 It's Duncan here, one of Ronnie's authors working with him on the book.

I just wanted to let you all know a little bit about what it was like for me and Nuala working on the pitch video that you can see at the top of the funding page.  When Fremantle Media agreed to let us use Zippy in this (they control all his public appearances quite strictly!) we were thrilled - having both grown up on Rainbow as kids, the idea of writing a script for a scene that Zippy would appear in was very exciting.

When the time came to shoot the video, and we actually got to meet Zippy in the flesh (well, felt) on stage at the Little Angel Theatre in Islington, we were actually feeling a little nervous.  It was like getting to work with a celebrity we'd been in awe of since childhood!

Even better, our director for the shoot - a lovely guy called Mark Bowsher from Rabbit Island Productions - announced that he would need a couple of stand-ins so that Ronnie and Zippy could appear in the scene together. As you can imagine, Nuala and I didn't take long to volunteer.  I stood in for Ronnie when he was operating Zippy in the close-ups - which basically meant I got to act in a scene with Zippy!  [See pic above, which makes it all look rather serious and dramatic...]

I also got to do something many kids (and parents) have been longing to for decades: to zip Zippy up.  (I was wearing Ronnie's shirt at the time so hopefully you can't tell it isn't really his hand doing it.)  Ronnie taught me a little trick he showed Geoffrey all those years ago to avoid damaging the puppet - if you look carefully at old Rainbow videos you might be able to see that Zippy actually moves his head while he's being zipped up, in the opposite direction to the zip.  So it's actually Ronnie controlling the movement, not me / Geoffrey.

Nuala, meanwhile, got to do something even more exciting - for the wide shots, in which Ronnie and Zippy both appear at once, she was actually the one operating the puppet. After spending ten minutes under the counter, she emerged exhausted, with an aching arm - and with more respect than ever for the long days Ronnie used to work in the Rainbow TV studios.  Whoever said working with puppets was easy?

All in all, we had a wonderful time shooting the video, and I hope you enjoy watching it as well.

More updates soon, as we hit our funding goals. In the meantime, do tell all your friends about the book and encourage them to pledge.