A pop star on the verge of a nervous breakdown.

Becoming #Zero. How a rock star changed my title. 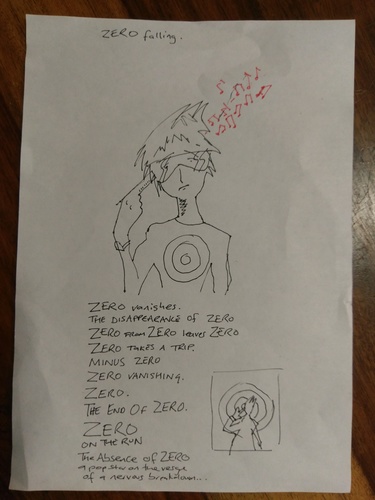 This was a doodle I did for a possible cover for my book. Let me tell the story of how it came to be called #Zero.

I’ve been dreaming this book up for a long time, pretty much since I finished Killing Bono. As you may know, it was originally published as I Was Bono’s Doppelganger, which had a cheesy B-movie drama that I liked. But after Bono read the manuscript, he pointed out that it was really about slaying dragons - and he was my dragon. He joked “You should call it Killing Bono. I can think of a few people who would buy that T-shirt.” But I was uneasy with a declaration of homicidal intent against my friend, and stuck with my comical original. Until the US publishers said they didn’t think American readers would “respond” to the word doppelganger (publishing speak for “it sounds foreign to us”) and asked for an alternative. I mentioned Bono’s title. They loved it. And as soon as I saw it on a book jacket, I realised Bono had been right all along. I should have trusted him. He’s come up with a few good titles before.

When I first embarked on writing a novel about a fictional pop star, it was called Motherless Child. Which, personally, I think is a beautiful title that reflects one of the principles themes of the book (the black hole of loss that so often becomes the engine of a quest for stardom) whilst drawing on one of the most moving blues songs ever written. But my agent wasn’t convinced. “It sounds like a woman’s book,” she told me. I am still not entirely sure why that was considered such a bad thing. I read a lot of books by women, with female protagonists, from Charlotte Bronte to Anne Tyler. But apparently the publishing industry believes male readers can get put off by anything that sounds too touch-feely. So it was back to the drawing board.

Anyway, I was in a bar in Dublin with Bono, many moons ago, when he asked me if I was going to write another book. It was an interesting conversation, which had other developments that I will return to at another date. But I told him about my novel in progress, and mentioned my title dilemma. “What’s the name of your pop star?” asked Bono.

“That’s your title right there,” he immediately replied. “That’s a great title. Zero. It’s punchy, catchy, mysterious … it’ll look great on a cover.” And having learned my lesson from Killing Bono, my work in progress became Zero.

And so it remained until about a month before we launched the Unbound edition. There was something that bugged me because (despite classic precursors from Don Quixote and Anna Karenina to Daniel Martin and even Stephen King’s Carrie), I’ve always secretly felt it was a bit of a cheat to name a book after a fictional character, and that a title should give a poetic hint of what lies inside. So, if you look at the drawing above, you can see me idly trying out alternative titles:  Zero Falling. Zero Vanishes. The Disappearance of Zero. Zero from Zero leave Zero. Zero Takes a Trip. Minus Zero. The End of Zero. Zero on the Run, The Absence of Zero. All pretty rubbish, and none with the zing of a straight Zero. So I was ready to surrender to the wisdom of Bono (there’s a title for a book) but I had another problem, which was that there was already a very good book called Zero. Only it was about maths not rock and roll (Zero: The Biography of a Dangerous Idea by Charles Seife is a fascinating history of the conceptual invention of nothing). And then, at the last possible moment, writing an email to my editor at unbound, I added that most 21st century of typographical punctuation marks, the hash #. It was done on a jokey impulse but when I looked at it, I knew I had my title. For in the age of social media, the humble hash has been reborn as the hashtag, an attention grabbing symbol signifying someone or something of public interest.  And since my character’s identity is framed almost entirely within a glare of incessant publicity from which he cannot escape, #Zero it became.

The animation of my sketch in my little Unbound promo film, by the way, was made by my 13 year old son Finn. Also known as #finnosaurus. See, I’m down with the kids. 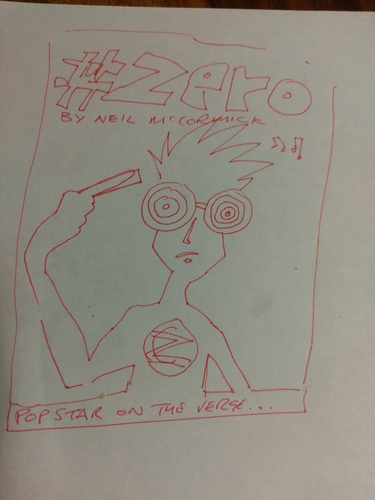 A first edition of the hardback plus the ebook and your name in the back of the book.
Buy now
£40  + shipping
69 pledges

As a music critic, Neil is the recipient of an apparently unending supply of CDs, records and other promotional material. His office shelves are creaking under the weight of assorted rock and roll paraphernalia, VIP stickers, posters and backstage lanyards. For 50 early bird supporters, Neil will send a pack of ten hand selected promo CDs and one piece of promo memorabilia. Plus (on publication) a signed first edition hardback, ebook edition and your name in back of book.
Only 70 available.