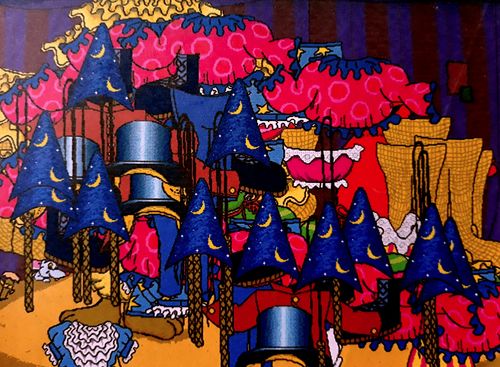 A semi-abstract Huw made using Sesame Street's Art Workshop when he was 9.  Five years later, his obsessions had got completely out of hand:

Mum and Huw go to one more shop.  It is a big shop that sells clothes and DVDs.  It is full of bright little lights and sparkly things as well.  'Jingle bells' is playing.  Huw can sing this song.  Huw sings it, and people smile.  Mum has a trolley and is looking at pyjamas.  Huw can see DVDs.  He runs to the DVDs.

Mum comes to look at the DVDs with Huw.  She has some pyjama trousers in her hands.  She holds them up against him.

She puts the other pyjama trousers back.

Huw can't see any of his favourites on the shelves.

'Oh, look – they've got the Muppets by the check-out.......Oh-my-God look at the queue!  There must be a hundred people waiting.  There's no way we can wait that long – we'll have to forget it.'

He runs to the check-out and picks up the Muppet DVDs – he holds them very, very tightly.

A man tries to take them away.  Huw hangs onto the DVDs and roars at him.

'Please – Stop! He's special needs!' Mum shouts.  She runs up to Huw and tries to take the DVDs.

'I'm sorry, he really likes the Muppets.  I'm sorry, but I can't pay for all of these.'

Huw runs off towards the doors.

'Is there anything I can do?' the man asks.

'Stop him from running into the car park, please. He might get hurt!'

The man and Mum and some other people from the check-out all start running.  The hundred people in the queue look at Huw as he runs past.  He is nearly at the door.  Two ladies catch him.  The man comes up.  Huw starts to struggle.  The ladies hang on to him.

'I'm so sorry,' says Mum, 'I thought he would be OK and wouldn't do this.  I could pay with my card but I don't really want six copies of the same film, and I don't know if I have enough money for them anyway – I only wanted the pyjama trousers and one DVD.'

The man is trying to get the DVDs off Huw.  NO WAY is the man having these DVDs.

He takes the pyjama trousers from Mum.

When Huw comes home from school next, there is only one Muppet DVD and he has a new pair of pyjama trousers.

Huw tries on his pyjama trousers and watches the Muppets. Then he has to do some more sorting.

From NOTES on the text:

The incident over the Muppet DVDs led to a revelation for me.  All those horrified faces watching the struggle with Huw made me see things from the point of view of the general public: here was a young man out of control – and the person in charge, his Mum, was visibly weaker and unable to stop him.  His roaring noises were scary to people who weren't used to them – and he appeared violent, even though I knew he wouldn't harm others unless they were trying to harm him – Huw just wanted his way with those Muppet DVDs.  I knew I couldn't take him out of the house by myself ever again.  Confined to home at weekends and during the holidays, Huw became more obsessional and I was expected to participate - sometimes until the early hours of the morning.  This would continue for a further six months, while things at home and at school got even worse.