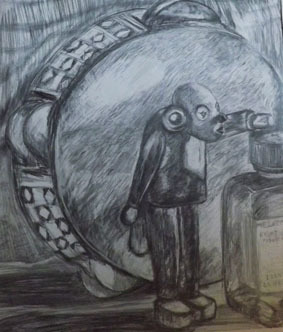 For most of six years, my son and I woke three times a night.  Melatonin was the only way of getting four hours sleep at any one time.  Then came a discovery:

She puts her hand to her head.

'Please go and see a doctor.  Maybe you can get something to make you feel better.'

'Promise. I'm absolutely starving and I've not long had some marmite on toast.'

Lucy goes out of the kitchen and comes back with the bread.

'I've just realised something,' Mum says.  'I think marmite is bad for me as well as for Huw.'

'It has something in it that can cause ups and downs in blood sugar levels, and the 'feel-good' factor in our brains which is called serotonin.  I love marmite but I think it’s why I was so miserable just now – and now I'm hungry.  SO hungry, I want to eat everything in sight.'

She tears the paper off the bread and spreads peanut butter on it really fast.

'Look at that article,' she says.

She gives Lucy the paper she was reading.

'It's all about Freed Glutamic Acid – it’s a very common by-product of food-processing – when you eat yeast extract, or malt extract in cereals, among other things, it can mess you up if you are sensitive to it.  The article says all people with autism are sensitive to it, and it looks like I am, as well.'

'We just won't have it in the house.'

'You're not stopping me having marmite,' Lucy says.  'I've had enough.  I want marmite.  Dad says you're obsessed about food.'

'Well, you're not stopping me from eating what I like.'

'OK. OK.'  Mum has her mouth full of bread and peanut butter.  'Mmmmmh.  That's better,' she says when she's swallowed it all.  'I thought I was going to pass out.'

The GP thought I was diabetic and I spent the rest of that summer testing my blood sugar levels twice a day.  These confirmed that I often had very low blood sugars, and only once did I have a reading much above the accepted normal range. I also noted frequent headaches and upset stomachs.  Gradually, I eliminated all sources of Freed Glutamic Acid from my diet – this included anything powdered (stock cubes, bouillon), most condiments (soy sauce, Worcester sauce, tomato sauce), along with textured vegetable protein – once the mainstay of our vegetarian diet – as well as anything containing yeast extract or malt extract.  Our return to a meat-based diet almost certainly helped, too, and after a while the dizziness disappeared, my sudden short bouts of terrible depression stopped and all of us began to sleep for more than four hours at a time without the help of Melatonin.

When I finally saw a consultant, he agreed with me that a sensitivity to processed foods could be linked to whatever had caused the dizziness.  Years later, I experienced an episode of sleeplessness that lasted a full, exhilarating forty hours.  I had recklessly failed to check the ingredients on a Tesco ready-meal.  Some months later, blood tests revealed that I had a Vitamin B12 reading of 96 (400 should be the minimum).  B12 deficiency was the probable hidden cause of this intolerance.  Elsewhere, I have described how and why I was almost certainly B12 deficient when my son was born – and why he would have been, too.  My later bout of B12 deficiency had other causes, but it enabled me to experience just how drastic the effects of a single additive could be (the ready meal had contained MSG or Flavour Enhancer, the better known form of Freed Glutamic Acid).  More and more people are likely to become B12 deficient as they switch to non-meat diets for long periods of time.  B12 is mainly derived from animal products, although a small amount can be gained – ironically – from marmite.  However, when I last looked at the label, this delicious spread has only 12% of the RDA of B12 in 100g, and with the best will in the world, 100g per day would be a challenge for even the most addicted fan.