Newly changed after his fall in a river, Huw is tempted by more water.... 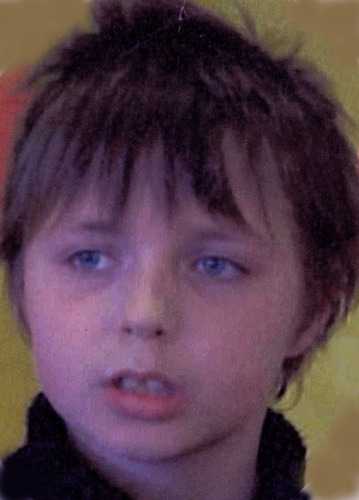 Then Mum and Lucy go different ways and they are both coming at Huw from each side and - Oh, no! They're nearly here! Huw must get in the water now. He's up on the wall and then he's in!

Swooooosh! Hmph rrrrrgh!! Everything has gone quiet. Huw is RIGHT UNDER THE WATER. It's really deep on the other side of the little wall. It's right over Huw's head. Wow! That was a surprise! Huw comes up to the sun and light and Lucy and Mum are looking at him with their mouths open. Then they start laughing.

She pulls him out. Huw can't stand the wet jumper. He pulls it off, and his tee shirt and his shorts and pants. Mum is trying to stop him.

Huw will NOT wear wet clothes.

'Jesus, Huw, people are looking at you,' says Mum.

She wraps a towel round Huw's middle and puts her cardigan on him.

'That is SO not a good look,' Lucy says.

Huw is cold and wants the car. They all run and get in the car.

'At least it isn't April,' says Mum, when they are inside the car, 'like it was the first time he fell in the lake.'

'We do really need the car,' Lucy says. 'We could never take Huw on a bus looking like this.'