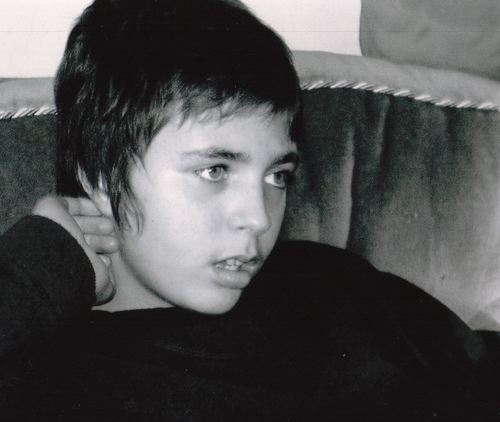 Huw around the time we needed a new car  - after an emergency with the old car (recounted in the book).

Breaking down has a whole new dimension to it, if young teenagers and an autistic child are included in the mix.  This time was not as dramatic as when I left the cap off the oil tank in the old car's predecessor and the enginge caught fire at the top of the highest mountain pass where we lived, but nevertheless it was a warning sign that a new car was needed fairly soon.  I had begun my search for one, when I received some unexpected guidance:

From 'Notes on the Text':

'This is such an old car now'

How we came to buy a new (to us) green car soon after this was a bit mysterious.  I'd been visiting local garages, looking for a car we could afford when I woke up one morning hearing a man's voice in my head saying,

'I'd have the green Rover if I were you.'

I had a vague memory of seeing a Rover at a small garage in the nearest village.  However, when we went back to look at it again, it was white and had a high mileage. I decided to check out another garage we hadn't yet visited and we were told there that there were two cars in my price range - a Rover and a Peugeot. As we stood looking at the Peugeot, the garage salesman said to me,

'I'd have the green Rover if I were you.'

We walked over to the Rover - it was green, of course, it had 56,000 miles on the clock and a full service history. It was the right price – I bought it, with a loan I could ill afford.  Five years later, this car was still going strong with 140,000 miles on the clock – and that's a miracle for a petrol engine, (although I know quite a bit about how to get cars repaired cheaply and before they go seriously wrong - I do come from a family of engineers, after all).  How weird is that, though?  That I should hear the car salesman's words before he said them!