As I mentioned in an interview recently, we often chose to go with Huw's autism rather than try to repress him.  Here is one example, which I wrote about in a poem, as well as in this extract from the book:

They go in the car.  Huw loves the car.  It is warm and soft and there is music and sun shining.

Now the sun has stopped shining.  The windows have gone white.  That's funny.

'It must be sea mist or something.'

She runs away, over the big round stones.

Huw decides this can't be possible.  No, no. They MUST swim.  They are here to swim.  They cannot NOT swim.  Swimming is the plan and the plan cannot be changed.  Huw kicks the back of Mum's seat and moans a lot.  Lucy comes back.

'There are people in the water,' she says.  'It isn't too bad – it's really weird, everything sounds muffled and you can't see very far at all.'

'We're going to have to go in,' says Mum.  'Huw will create merry hell otherwise.'

'Doesn't everyone sound funny,' says Lucy, 'like they're talking into pillows.'

They can hear a helicopter.  It is on the other side of the steam.

'Can you see the helicopter at all?' Mum says.

'No.  I can hardly see a thing.  This is one of the maddest things I've ever done.'

'It was sooo weird,' says Lucy.

They eat chips in the car.  Mum drives and eats chips at the same time.  Soon the sun starts shining again.

'I bet it's been like this all day, here,' Mum says.  'We'll have to be careful what we say in future.  Once you say you're going to do something with Huw, there really is no going back.' 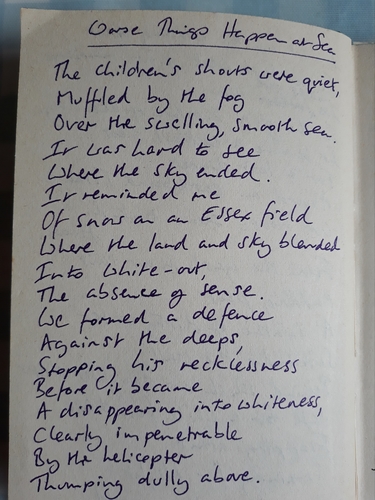 From the 'little book' I write in from time to time, when times get rough in 'Your Life as I Knew it'.  When I first got together with the children's father, we were both aspiring poets.  He has published a collection.  My poetry remains largely unpublished - I was busy doing other things, of course (like swimming in fog).