Laughing at the Flood 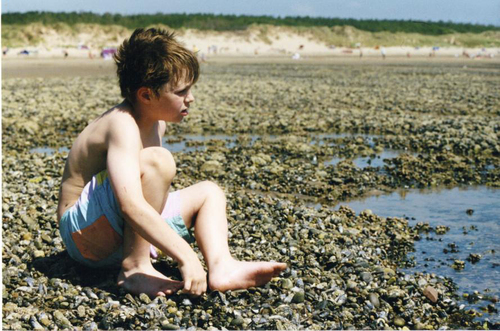 What was that?  A very loud CRASH!!  Now, there is a waterfall in the house.  Huw can hear it rushing and rushing.  Oh, it's stopped.  Huw can hear Dad.  Now he shouts,

Mum, Dad and Lucy all say that a lot.  Huw stays in his room.  He can't hear the waterfall any more.  Then he hears Lucy scream.  Now she is laughing, like when Huw used to smash dishes in the kitchen. He used to hurl them to the floor from where he had climbed up to get in the cupboards.  Huw doesn't smash dishes any more or empty cereal, coffee, milk, sugar all over the place - he's grown out of that.  Huw goes to see what all the fuss is about now.  The stairs are soggy.  Wow!  The room downstairs is full of water and Lucy is in it.  She is using the thing which holds the fire irons to take the water and put it in Huw's toy box.  Where are Huw's toys?  Oh, there they are on the sofa – the water nearly reaches them.  Amazing!  Huw can see the kitchen through the door – it is a swimming pool as well.  How did that happen?

Dad stops and Lucy stops and they look at Huw. Lucy starts laughing again and Dad laughs too.  That's all right then.

They go in the car later on.  Mum gets off a train.  She is wearing a long dress with flowers on it and has a bright strip on her arm.  She is smiling and her teeth are white.  Her face is brown and her hair is light and Huw is smiling.  She kisses them all and says

'What happened with the trains?' Dad says.

'Dunno.  Something to do with a freight train on the wrong track.  We were stuck in the middle of nowhere for four hours.  It was quite creepy.  We didn't get to Stockport until one in the morning.'

Mum is sitting in the front, next to Dad.  Dad is driving.

After a bit, Mum says:

'You have never washed the kitchen floor – ever. What's happened?'

'Huw got up in the night and turned the bath tap on – and then went back to bed,' says Lucy.  'I told you we had to hide the plug.  He put it in, and everything.  The water was THIS DEEP,'  she holds up her hands, 'downstairs. It all fell through the ceiling. There's a great big hole.'

'Mopping!' says Lucy.  'We were bailing.  It went across three rooms.  It was up to my knees to start with.  And then – and then,' she laughs, 'and then Huw got up and said 'Want to go swimming!''

'He didn't!' says Mum – and she begins to laugh.  She laughs and laughs.

We stop at a garage.  When Dad gets back in the car, he gives Mum a bunch of flowers.

'That's for laughing at the flood,' he says.