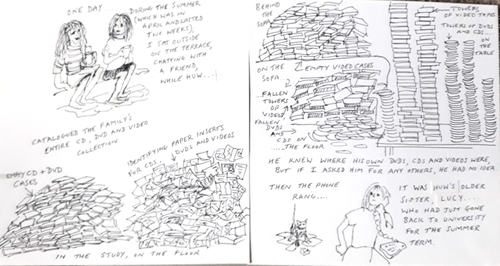 It is sunny outside but Huw has a lot of new things to do. Mum has been taking the paper out of video cases – Huw has helped to put the paper in a box.  Then Mum puts the video cases and tapes in black bags. While Mum is in the back garden talking to her friend, Huw decides to do this with the DVDs as well as the videos that have been left over.  He has no black bags or box, so he puts the paper in a pile, the cases in a pile behind the sofa, and the videos and DVDs in towers on the kitchen table.  Huw makes a few of these towers, but he doesn't want to stop there.  He does the same with the CDs.  He takes all the paper out of the CDs and puts that with the pile of paper from the videos and DVDs.  He puts the cases for the CDs with the cases for the DVDs.  Then he puts all the CDs in towers on the kitchen table.   He is doing this when Mum and her friend come in from the garden.

Mum’s friend says she has to go.  Mum says goodbye to her and comes into the kitchen.

'Oh, Huw,' she is standing in front of the towers of videos and DVDs and CDs, 'I never knew we had so many.'

Mum goes to look at the mantelpiece.  There are no CDs there.  Huw has moved them and put the paper in one place, the cases in another place and the CDs on the kitchen table.

Mum doesn’t dare ask which six new CDs Lucy left on the mantelpiece.  After she has put the phone down, she goes into the study and says 'Oh, my God,' again. She wanders around a bit and looks at things.

She opens a green bottle and pours some wine into a glass. She goes to the pile of CD cases and puts them in a box, one by one.  This takes quite a long time.  Sometimes she puts a CD case on the mantelpiece.  Sometimes she pours from the bottle into her glass.  Huw does things on the computer, but he comes back to see what Mum is doing, too.  She is going through the box where she put the CD cases again.  She takes out more CD cases.  Now she has a few more on the mantelpiece – she puts the box of CD cases in the kitchen and goes to the pile of paper in the study.  She takes the CD cases from the mantelpiece and looks at them for a long time.  She puts them in a line along the back of the sofa, where all the paper is.  She looks at each bit of paper, one by one.  She puts most of the paper in a box. Sometimes she says,

'Ah!' or 'Got one!' but most of the time she just sighs and takes mouthfuls of wine from her glass.

'It's time we got rid of these,' Mum says.  'You don't play them and I don't either – and some are really scratched and don't play anyway.'

She puts a whole lot in the bin at the same time. She looks at some more CDs and sighs. 'Ah ha!' she says at one point, and puts a CD in one of the CD cases on the sofa.

It's time for bed.  Mum gets Huw ready and reads him his stories.  She has the hiccups.  Her singing isn't very good this evening.  Huw lies still and watches the lights on the ceiling from his new bedroom light.  Mum goes downstairs.  Huw goes to sleep.

Huw wakes up when it is still dark outside.  He goes downstairs – everything is cleared away. The DVDs and CDs have all gone from the table.  The DVD cases and CD cases have gone and all the paper is in piles in boxes.  Huw goes into Mum's room.  She is fast asleep.  Huw wakes her up.

'Don't touch anything,' she says, and then gets up and runs downstairs.  When she comes back, she has some CDs in her hands.  She puts them under the bed.

'Phew!' she says, 'I don't want to have to go through all that again.'

Huw wants to get up.  Mum puts the Muppets on the TV and falls asleep on the other sofa. Later she wakes up.

'Oh my God,' she says and runs upstairs.  She comes downstairs with the CDs.

'Don't touch,' she says and puts the parcel behind a cushion.  She falls asleep with her head on the cushion and the parcel.

Huw has enjoyed sorting things and is going to sort a lot of other things from now on.

1st edition paperback, ebook edition and your name in the back of the book.
Choose this reward
FEATURED REWARD
£20  + shipping
27 pledges