How it Felt at the Time 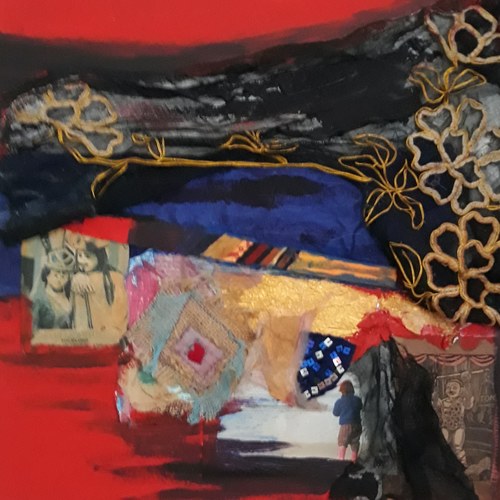 I don’t often give in-depth interpretations of my paintings (which are really mixed media works), but I’ve recently been looking at this one and thinking ‘Yes, this is a true picture of how it felt at the time’.

The two figures to the left – who look like a king and queen – are puppets and made of wood.  They are from an old Stella Artois beermat I found in a framed montage in a junk shop.  My marriage was beginning to fail at the time, so wooden puppets are a fair representation of a relationship going through the motions while looking like the golden couple to outsiders.  There are also French connections in my family, and alcohol-consumption was playing its part as a coping mechanism.

The heart floating between the couple and the photograph of my son playing on the beach indicates both attachment and detachment.  It is backed by a disintegrating fragment from a silk and hessian piece I made in a textile class on my first foundation course way back, when my daughter was only a year old, and art had provided me with a way forward (therapeutically, and as a cartoonist).  It would do so again and result in a career change, once I had gained my second degree.

Above, there are dark swirls, indicating threat, but also family background: the embroidered fabric is from a screen brought back from Burma (Myanmar) by my husband’s missionary grandparents.  Huw similarly has a looming black shadow behind him, indicating all the fears that haunted us before and after his diagnosis with autism.

In the bottom right hand corner, there is a Victorian figure of a strongman lifting weights.  This could be hope of some help or support, or an indication of the strength needed to get through the years to come.  The ‘sea’ is a rich blue silk, for the solace that nature gave us all, living in such a beautiful part of the world.  The shiny blue and silver sequin piece represents the visual effects experienced by my son, who would say ‘Stars… stars’ quite often when light and reflections were strong.  This might also have been an indication of his epilepsy, which went undiagnosed until he was twelve years old.

The scarlet red framing stands for both passion and anger – very much part of our lives as things began to fall apart.

I must add that none of this symbolism was very apparent to me while I was making the artwork.  It was the result of an intuitive, non-verbal process, during a much later time of further crisis and reflection in 2016.