'I wondered if he would like a bit of cake,' says Rosy. 'I made one gluten free with the marge you listed as OK.'

'It's alright you can stay in the sitting room and I'll bring you the cake,' says Rosy.

Huw is opening all the cupboards in the kitchen.  Huw finds some jam, but no cake.

Mum and Rosy are in the doorway.  Rosy is laughing.

Rosy is opening a big round tin. Inside is a chocolate cake.

Rosy goes into the sitting room with the cake.  Huw follows the cake.  He loves chocolate cake best of all.

'I used dark chocolate,' Rosy is cutting the cake inside the tin.

'It looks wonderful,' says Mum. 'I like chocolate cake myself.'

'Oh, we're all having a bit of this, because we're going to be having a late lunch.  Fish and chips at the seaside, what do you think, Huw?'

'Not this time, Huw.  Going to have fish and chips instead.'

'Huw loves fish and chips.  You just take the batter off the fish before you give it to him.  It's not as if he's allergic to gluten - just intolerant.  I try to be realistic.'

'Here you are, Huw.'  Rosy gives Huw a big piece of cake on a plastic plate. He eats it very fast.  Rosy goes out of the room and comes back with a teapot in a woolly hat with holes for the spout and handle.

'He'll be here in a minute.' Rosy is pouring tea.  'Barnardo's thought it best that Huw should meet us one at a time.'

'They really know what they're doing,' says Mum.  'I spent ages with them answering every sort of question you could imagine.'

'Yes, we've got all your answers here,' Rosy waves some papers.

Thank you Rosy and Jim (as Huw called you).  You probably saved my life.

FROM NOTES AT THE BACK OF THE BOOK:

This is the theory that something damages the gut walls of autistic children, and this allows semi-digested milk and gluten products (opioids) to escape into their blood stream.  Back in the 1990s, Paul Shattock, and his colleagues at the Autism Research Unit at Sunderland University developed a urine test to detect these 'opioids', which they believe have a 'morphine-like effect' on the brain.  Huw took their urine test when he was six and it showed that he had opioids, too – although not for milk so much as for gluten – probably because I'd taken him off cows milk products two years previously. However, I had been nervous about eliminating milk products entirely from his diet, so I had given him goats milk, and sheep and goats cheeses instead.

I pondered why Huw tolerated goats milk products better, until I recently heard a report on the radio saying that being able to digest milk may have led to humans developing white skin.  For a redhead, my skin has always had an unusually golden tinge, and I have as many white freckles as brown.  If you look more closely, there are larger patches of skin which are light brown with jagged edges.  Huw has similar ragged edges to darker patches of skin.  These are very faint, but clearly visible.  This, to me, suggests a difficulty with absorbing milk products - in our case, cows milk and cheese.  The thought of drinking a glass of milk makes me feel sick, and certain types of cheese make my ears itch.  This is why my intake of dairy products was quite low during pregnancy.  Huw's urine test showed he had no problem with goats or sheep's milk products, however, so some of this may be due to his ancestors, who were fine with milk from animals other than cows.  Family origins on my father's side point to Spain, and earlier to North Africa - where cows milk products are not generally part of the diet even now.

Take away meat as well, because I was a fish-eating vegetarian, add the fact that I had been on this diet for ten years, and it is highly likely that my reserves of vitamin B12 (only available from animal products) were very low when I became pregnant with Huw, and so were Huw’s until he began eating meat for the first time, at the age of seven.  Vitamin B12 deficiency affects our ability to absorb certain foods, as well as excrete toxins.

MY COMMENTS FOR UNBOUND VISITORS:

When I took Huw off gluten as well as cow’s milk, he began to use the toilet on every occasion. I also introduced meat into his diet for the first time, boosting his B12 levels (although I didn’t realise this at the time). His father, a vegetarian, broke the diet twice when Huw stayed with him, and both times it led to a relapse.

Books advising on identifying food intolerances suggest ‘challenging’ the diet after a few weeks to gauge reactions. This was exactly what happened when Huw’s father ignored the new food guidelines, and to me it adds to the evidence that at that time, Huw could not digest gluten or cow’s milk. Further research has suggested that gluten can trigger seizures, so it is possible that Huw was suffering absences, which prevented him from identifying his need to evacuate.  He was seven-and-a-half when he finally found the toilet every time.  This meant he could stay overnight with Rosy and Jim, which he did every month or so until he was eleven, changing our lives considerably for the better. 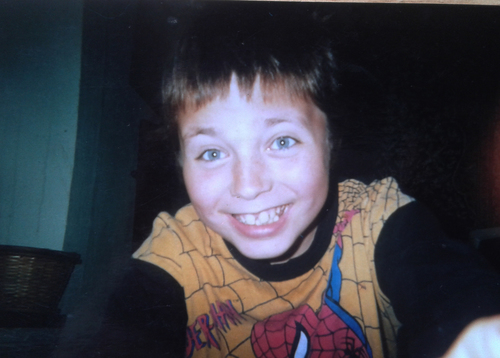