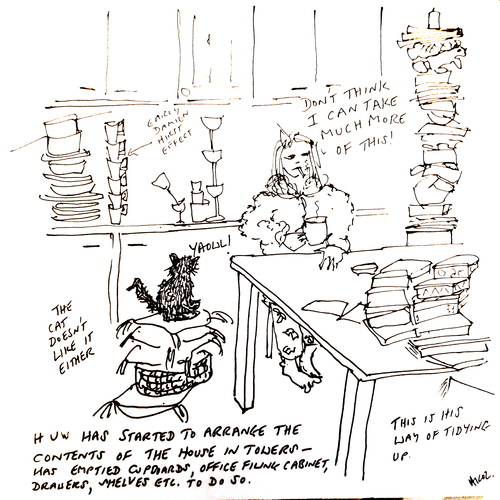 Because things were deteriorating at home, I went to see Huw's teacher:

From Notes on the text:

She wanted me to use PECS cards with Huw at home to teach him to use the loo properly.  I said Huw always used the loo properly at home.  Apparently, he wasn't doing so at school.  She showed me a row of PECS cards instructing him how to do things in a certain order.  I said Huw usually flushed the loo after washing his hands, perhaps this was the problem?  I think, now, that either Huw was frightened of getting her instructions wrong and ending up in the grip of the so-called 'carers' in his new classroom, or he was peeing on the floor as a protest.  Maybe Huw was having increased absences because they were being slap-dash about his diet, or because his medication was no longer effective.  Whatever the reason, Huw deteriorated rapidly there.

Many things were wrong with the new unit Huw had been sent to.  The room where Huw was being taught had a terrible echo – even I found it difficult to process what his teacher was saying to me.  The lights there were way too bright and the carpet was covered in a distracting mosaic pattern.  The walls – I still can't believe this – the walls had see-through plastic bags filled with A4 sized PECS symbols ranged in columns, which loomed over us.  One of the most elementary needs for most people with autism is a low-impact environment – simple, uncluttered, neutral surroundings.  When Huw was a little boy, I had felt guilty that I hadn't managed to put things up on his bedroom walls but, as it turned out, plain walls were just what Huw needed in order to relax, and his bedroom was always a place of refuge for him.

*Picture Exchange Communication System.  Huw could talk.  His teacher didn't want him to.  She wanted him to use pictures instead.  It drove him crazy.  He got very angry and his 'carers' started to hold him down whenever he expressed this