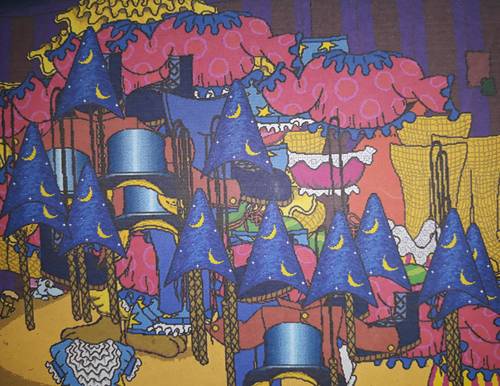 One of many pictures Huw made using his beloved Sesame Street Art Workshop - were these multiple images the result of the absences he was experiencing (every seven minutes, at the age of twelve)?

There were signs, looking back, but we (all the experts as well as myself) didn't make the connection.  It was too easy to assume that they were the signs of autism: absences manifest as a disengagement from the world, myochlonic seizures can look like the autistic tics some children have, complex partial seizures have the appearance of a panic attack or tantrum.  It was only after my son's first full-on tonic-chlonic seizure at the age of twelve that many other behaviours (tracked in 'Your Life as I Knew it') began to make more sense.  Here is an extract from the book, which describes the build-up to a seizure, as reported by carers at his weekly boarding school; it also illustrates my son's love of music, jigsaws and Scoobydoo:

At school they have turned all the cupboards round, so the doors are facing the walls.  This means NOBODY can use the cupboards, especially not Huw.  This drives Huw mad.  Huw gets cross and Mrs. E. goes out and brings back two men who take him out of the classroom.  Huw doesn't want this, so he struggles and roars.  The men have hold of him and take him past lots of doors.  Huw kicks and hits and wriggles and roars as much as he can.

Huw will not calm down.

'No.  No jigsaws – definitely no jigsaws.'

'You have to stop thinking about jigsaws,' the other man says.

They get to the chill-out room and Huw sits on a beanbag.  Some music starts.

One of the men goes away.

'Razorlight?  Was that the Strokes you were asking for just now? '

'I'm sorry we don't have The Strokes on tap here – or Razorlight.  You have cool taste in music.'

'Sorry – we're stuck with this electronic stuff – it should help you relax.'

'Yes, that's right – relax.  You could lie down and close your eyes.'

Huw closes his eyes, but he doesn't want to lie down.  The music is a bit spooky.

Later, Huw goes back to his classroom.  Mrs. E. talks to him about the cupboards.  She says Huw mustn't go in the cupboards.  Then Huw goes to have his lunch.  It is his favourte, 'Spaghetti Blog Knees' he calls it, and he always has it on Tuesdays.  Huw loves it and eats all of it.

But Huw is not alright.

Huw opens his eyes and Mrs. E. is looking down at him.

'Three and a half minutes in total,' says Mrs. E.

Lori writes on a piece of paper.  She is crying.

'He's OK,' says Mrs. E.  'It is shocking the first time you see one, but he is OK.  It's a bit unusual for him to have three in a row like that, though, so I am going to call out the paramedics.'