This is an extract from a sketchbook where I noted some of Huw's early symptoms.  It was meant as a guide for parents, and in the first 'window' I was careful to add the proviso that behaviours which are shortlived, and don't appear all at the same time, are likely to be due to other problems.  When did it all begin? is a question parents still ask - amid continuing fears and furore over vaccinations (for example).  I have a photo of Huw gazing at his splayed fingers at only two weeks old, which to me indicates that he was probably born with autism - looking at the world through the fingers of a raised hand can be a sign of visual overload.  Huw was also incredibly wriggly - like a baby octopus - by the time he was about six months old.  Leading by the hand (i.e. trying to get my hand to do something instead of using his own) also made an early appearance.  In this picture I tried to convey something of the chaos of his toddlerhood: 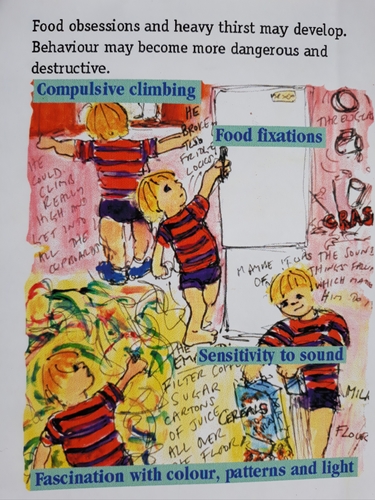 'Your Life as I Knew it' begins when Huw is four years old, when the sound of breaking glass had diminished somewhat, but I include this sketch as an example of how I had begun to document his progress almost as soon as I started my art course.  I appreciate that in its milder forms autism can be vital to creativity and brilliant experimentation, but in its severe form, it can be quite overwhelming for both the child and the parents. In the admirable fight for acceptance of autism as simply 'another way of thinking', it is important to remember that for many people, including the person with autism themselves, it can be a huge challenge - and it is therefore of utmost importance to identify causes of the more extreme forms so that they can be addressed.  At the end of my book I list many different possible contributing factors to Huw's particular type of autism, and raise a number of questions I hope scientists as well as parents will find illuminating.

1st edition paperback, ebook edition and your name in the back of the book.
Choose this reward
£10
44 pledges