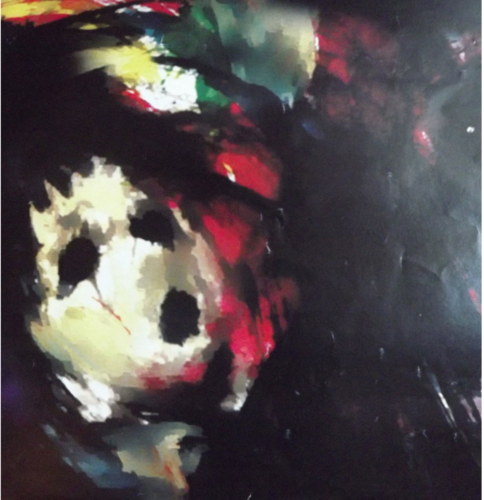 Mum and Huw are in the shop in the village.

Huw finds the tuna – no problem.  Mum is tutting at the meat – sohh dear,' she says.

Huw runs round to where the chocolates are.  He especially likes the ones in the big purple box – up there.  Well, if they're up there he can climb up and get them! Huw can climb really high, now he goes to the climbing wall.  Vivienne from the swimming pool and her friend John take Huw to the climbing wall. When they come back they say,

'You don't want to see how high he climbs – he goes right to the top.'

The shelves in the shop aren't very high at all.

'Give me those. Put them back!'

No way. Huw has got them now – he can't put them back.  Mum is trying to take the box from Huw.  He's holding it very very tightly.

Huw has hold of the purple box and he has squashed it in his arms.

'Oh, well,' Mum says, 'I suppose you can have a couple and Lucy can have the rest.'

She buys the chocolates, and the tuna and some vegetables.

When they get home, Huw fights for the chocolates.  Mum gives him some.  Then she locks the box in the room where she does her painting.  Huw forgets about the chocolates and goes to his room.

Huw goes downstairs.  Yippee! The locked room is not locked. Mum is in there painting a picture. She's done a picture with words and Huw's face on it, and lots of colours.  The colours are very bright.  Huw knows the chocolates are somewhere in this room.  Huw starts looking for them.

Mum gets hold of him and says,

Huw struggles and yells.  He wants those chocolates – NOW.  Huw finds them.  Quick, quick – get the paper off them – the shiny bright paper.  Mum has hold of Huw's fingers.  Now she has got the box with the chocolates in it.   She throws it across the room away from Huw.  Huw can't reach it, but he still has one chocolate in his hand – if he can – just – get – it – into – his mouth.

She has taken the chocolate out of Huw's hand.  He is really, really cross.  He roars and throws his shoes in the air.  He tries to get the box.  Mum is dragging Huw out of the room.  He is trying to get away from her, to get back in the room, but she won't let go. Huw wants chocolate.  HE WANTS CHOCOLATE!!  Mum is trying to stop him.  She pulls Huw through the door and shuts it.  There is a click and she has taken the key out of the lock.  Mum runs into the kitchen and Huw doesn't see where she puts the key. Mum has a packet of biscuits in her hand.  They are the boring biscuits she gets from the chemists.

'You can have dark chocolate,' says Mum, 'from the health food shop.  I'll get you some, next time we go out.  I promise.'

Huw doesn't like the doorway.  Huw holds the edges of the doorway, but can't go through the doorway straight away.

'You see,' says Mum, 'this is what milk chocolate does to you.  It makes you angry and then you can't seem to see properly.  You hurt me.  I know you didn't mean to, but you've hurt my hands.  You just want more and more chocolate, but if you keep eating it you will not sleep and your brain will go funny like before.'

Mum helps Huw go through the doorway.  Huw pulls all the cushions off the sofa and turns the sofa upside down.

'NO. PLEASE,' Mum says.  She is holding her hands.

A big tear is running down her face.  Huw has made a tower of all the cushions in the middle of the floor.  Mum is crying but she isn't making any noise.  She goes back into the kitchen, and Huw has a great time with the cushions.  He knocks them down and makes a tower again.  This will be his new game from now on – this, and turning the beds over.