Most of 'Your Life as I Knew it' is about when Huw was at home with us, but at the back of the book I have written notes which fill in some of the gaps.  There is quite a lot about my attempts to modify Huw's problems through diet, and there are also other sections, which might be helpful to anyone struggling with daily pressures similar to the ones we faced.  After Huw left home, I continued to make pictures and exhibit them.  This is my most recent work, which I think shows that at some level I have now recovered from much of the stesses of that time.  It is mixed media, in the old fashioned sense of using found objects including the actual canvas.  I like hearing people's reactions to these works, because very often they see things in them which I didn't know were there myself. 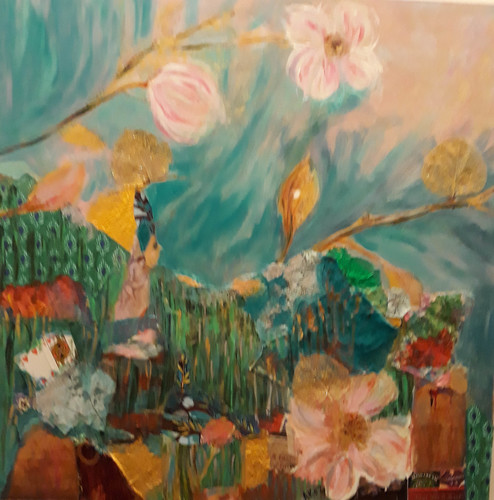 From 'Notes' in the book:

I can't tell you how much studying art helped me – it was beyond measure. The discipline of a degree course meant that I had to complete assignments, and to do so, I had to sit still and paint, draw or sculpt. It brought a peaceful state of mind and body that I desperately needed – and the fact that I was following one of my true passions to a useful end gave me a sense of individuality and purpose – while my role as mother still meant that I was in demand three times a night, three hours before school, and many hours afterwards. No employer was prepared to release me early from work each day, and I felt Huw needed to come home to Mum and not a childminder at 3.30pm.