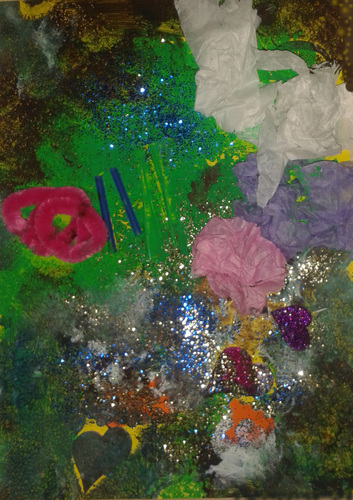 Collage made by Huw in 2017.  Huw's visual sensitivities, mentioned in my last post, have produced some lovely abstracts over the years.  As for my belief that he was born with autistic traits, here is an extract from my notes on the text of 'Your Life as I Knew it'.  If you google the effects of B12 deficiency and how it affects our ability to excrete toxins, you may begin to see why the causes of autism have become so complex.  The vitamin deficiency creates the vulnerability, then the toxins can vary - with differing results.  Vegans and Vegetarians please be aware that one of your favourite sources of the vitamin (once mine, too!) is not enough to make up for the deficit!

My husband was absolutely right that Huw needed his B vitamins - just how much would only become clear to me decades later.  When I last checked, 100 grams of marmite contained only 12% of the recommended daily intake of B12 - not enough, even if 100 grams a day could be tolerated, to repair the damage caused by long term B12 deficiency, which I believe my son had from birth.  Sources of B12 in our diets include red meat, which I hadn't eaten for over ten years and which Huw had never eaten, milk, which I hated, and butter, which we weren't eating because of the new veggie margarine which had recently appeared. Animal rennet in cheese had also been replaced by a non-animal product, so during pregnancy it is almost certain that I was B12 deficient, as was Huw when he was born.  Research has established that formula milk which supplemented my breast feeding would not have contained enough B12 to make up for this deficit.  Ten years of my diet before giving birth to Huw would have used up any B12 stored in my liver, so I agree with Sally Pacholok and Jeffrey Stuart ('Could it be B12?') that in the case of my son's autism, yes indeed it could!