From NOTES on 'YOUR LIFE AS I KNEW IT'

Not long after Huw's brain scan, which was normal, there was a somewhat hectic appointment with the hospital consultant. The wait had been longer than expected and I'd made the mistake of giving Huw an outsized flapjack from the hospital cafe to eat. This had the effect of catapulting him into manic activity, even before he had finished eating it. We entered the consulting room in a hail of crumbs and raisins, and Huw spent the next few minutes - which seemed endless - doing his best to climb on top of the consultant's filing cabinet.  As usual, I asked her about his occasional jerking movements and strange roaring noises, but she seemed satisfied that it was just a 'tic' and nothing could be done about it*.

One effective treatment she did prescribe was a nightly dose of melatonin. This helped Huw sleep for at least four hours in one go, and this meant that I could sleep from 9 o'clock to 1 o'clock in the morning. Then I only had to cope with Huw waking again at 3.30 am, before getting up for his usual 5.30 morning start.

Below is a drawing I made of three important aspects of our family life soon after this.  The little wooden figure is of a children's cartoon character which I found in Prague, where I went with my fellow art students (a life-saving short break I took when Huw was five years old); the tambourine represents our whole family's love of music, which helped us to share some of Huw's inner world, and the bottle of pills is - yes, you've guessed - the melatonin, which kept me from going completely insane from lack of sleep.**

**I read recently that many children who don't have autism are being prescribed this drug and that there are concerns about its long term use.  When I finally gained control of Huw's diet, his hyperactivity diminished and we all managed to get more sleep without the aid of melatonin 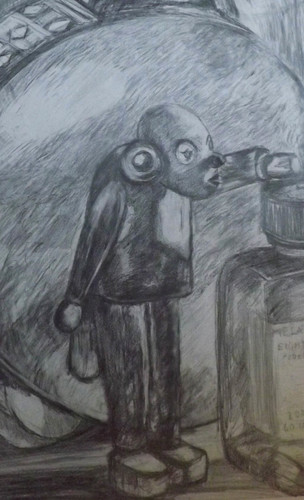