Hi all,
Thanks so much for pledging. There's 137 of you so far which is EXCELLENT.
Here is another little extract. It's one of Mauds letters from the first half of the book. 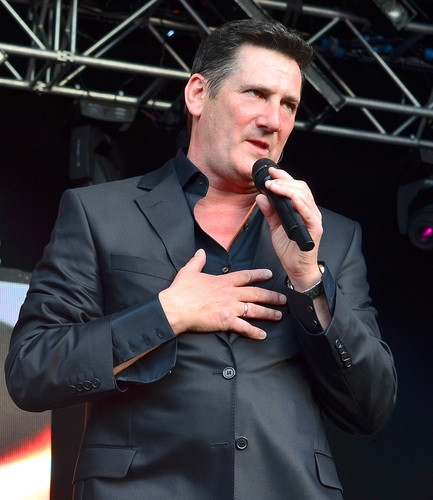 Dear Tom
(Or do you prefer being called Thomas? Or did your Mum Christen you just ‘Tom’ I like both names, I would love to know how to address you properly, please tell me if I’m doing it wrong. Oh maybe you like being called Mister Harding, or Master Harding?)

Dear Tom,
I had a dream about Spandau Ballet.

I don’t even like Spandau Ballet very much. I mean, they’re ok but I prefer bands that are sort of, a bit edgier (like Horsefly (your band)). I HATE Duran Duran. I would never believe anything Simon Le Bon said to me, he looks like a liar. Anyway I dreamt that Tony Hadley was my teacher. I had a lesson with him and it was the end of the day and everyone else left and he grabbed my arm as I was going out of the door and said “Maud can I have a word with you please?” I agreed and then after everyone left we closed the classroom door and then he picked me up and popped me on his knee like I was a little girl and he asked me if everything was ok at home and I said it was and he said ”it’s not though is it?” and then I started crying on him and all my tears made his stripy cotton shirt stick to his chest. He held me and rocked me really tightly until I stopped crying. He was humming a song as he was holding me. I can still hear the tune in my head but I don’t recognise what the song is. It’s quite catchy though, actually I think it was Musclebound.  Then he wiped my tears away and he has really really big hands and he said I was very pretty.

I can still picture really clearly in my head his shirt buttons, because my head was just laid on his chest. At the end of the dream I think we were about to kiss but I woke up. Which is thankful because I don’t see Tony Hadley like that, although maybe my brain does. Or maybe I woke up because my brain didn’t want to see me doing that? Do I see him as a pop star? A father? A teacher? Or a lover?

Anyway when I woke up I was crying, my pillow was all wet but I sort of felt quite good and quite happy. What do you think it means?

I told Sarah about it. She thinks it means I secretly fancy Tony Hadley but I’d tell her if I did. It wouldn’t be anything to be ashamed of. He’s not Simon le Bon is he?

What do you think it means?

I’m quite looking forward to going to bed tonight in case it happens again.

I read in a book that dreams are what is happening to you at the same time in another dimension. I think it means that on every planet you could be doing something different. So on one planet I live here and I write to you. And on another planet Tony Hadley is my teacher and he likes cradling me, and on another planet I’m supporting you on tour with my band. I don’t know what my band is called at the moment. Hmm what about one of these?

Kiss the teacher (again more of a song title, it might get banned though)

What do you think? I quite like a lot of them at the moment but then I often make lists like this and by the next day I’ve gone off all of it. I need a name that I’m going to be happy with for the next ten to thirty years depending on when the band splits up.

How did you come up with the name Horsefly? Do you like all different types of Flies? Or do you like Horses and Flies or do you only like the Horsefly, or do you hate them? Or is it to do with it being a fly that bites you, like music could bite you like a horsefly? Did you come up with the name or did you all decide it together? I have SO many questions. I read that Spandau Ballet got their name from Nazi prisoners of War. I’m not sure why they wanted people to be reminded of the second world war. I’ve heard it was really awful. Was your Dad in it? Mine wasn’t. I’ve never met my Grand dad so I’m not sure if he was in it or not. I should ask my Dad really if I ever see him again. I don’t really like any kind of fly but they are useful. There was a big dog poo outside our house on the pavement and I think it was entirely eaten by flies. Flies and worms are really useful aren’t they? And Bees. I wonder if The Bee Gees like Bees and horse racing?

I have to go now.

P.S What about Hardings Hands? Or Hardings Tears?

P.P.S Although you weren’t in the dream at all, which is weird.

P.P.P.S What about Maud Harrison and her Wet Cotton backing band. Or is it a bit showy offy to have your name in the title of the band? If I did would that mean I have to be the singer? I’m not sure I’d be suited to that. I’ve heard my voice on a tape player and it wasn’t very good so I’m not sure how it would sound through a real microphone.

P.P.P.P.S Although you don’t really sing do you? More a sort of a shout, you always sound quite cross but it’s very effective. Tony Hadley can sing.

1st edition paperback, eBook edition and your name in the list of Super Patrons in the front of the book.
Choose this reward
FEATURED REWARD
£200  + shipping

10 books for your book club, up to 10 names in the back and an author talk for your book group. Within 150 miles of Manchester.
Choose this reward