Yeseni and the Daughter of Peace

Elewa learns that she has Yeseni, a powerful gift. Will she use it to save her kingdom or the world?

Sometimes when I close my eyes I see a beautiful, almost hypnotic, pattern of colour, and if I focus on it for long enough it sends me into a deep, tranquil, sleep. My Yeseni had opened up my world, it made we wonder about things I’d never really thought about before. I’d often contemplate colour, this thing or noun that I thought I knew. Until I travelled to another world only to find the people in that land described, and perhaps even saw colour in a different way to me. I’d often stay up at night wondering if the sky was really Zoozu, if the leaves on the tree were really Borou and if the sun was really Vapa or did we just see them like that because it was convenient for us.

In this strange land they described the sky as blue, the leaves as green and the sun as yellow. Our word for their ‘blue’, in Olebas meant a group of dark colours, including black, red, green and purple. I soon came to realise that there was nothing literal about colour. Once I started to understand how to access my Yeseni, things as seemingly simple as colour would become blocks in my comprehension. That was until I learnt that colour is simply an illusion that helps us to see the world in a way that is useful for us to see, at any point in time.

From a very young age the reasons for war were explained to me in depth, or as much detail as I could comprehend at the time. Papa said that I was implying questions with my tone, as soon as I could make sounds. He said that I’d point at things and raise the inflection in my voice, uttering obscure non-words, then await an explanation from them.

Papa would often joke with mama that I even wanted to know why the breeze blew through the trees. He would mainly do this when I asked the more difficult questions. The ones that didn’t really have an answer, or at least, not one that could be articulated in a nice, neat, package and finished with a bow.

I think this is how papa felt when I asked him why we had been at war with the Okena’s for so many years. I remember him smiling and shaking his head at me. I think I was around six or maybe seven years old at the time. After looking at me and shaking his head, he turned around to the faucet and loosened it, to wash the blood off of his hands.

‘Pass me the cloth Elewa’, he pointed over to the row of clean cloths that he used as makeshift bandages, they were hanging on the washing line.

Elewa was the nickname that papa had given me; it meant pretty. Papa always said I had a face that the world should see.

I jumped up underneath the washing line and grabbed a clean cloth for him.

‘Now hold there and don’t let go’ he said, it was the first layer of the bandage to be wrapped around his wounded hand, he needed me to hold it firmly, so that it would stay in

place. I felt so important and proud that I could assist my papa in this way. The wound was quite deep and just off the centre of his palm. As Papa wrapped the cloth around his hand, my finger that was holding the first layer of cloth, starting to feel trapped.

‘So your question was, why do we go to war?’ he asked

‘Yes papa’ I said with an uncomfortable look on my face, I wanted to ask him if I could release my finger, I was sure that the other layers were now secure enough to hold the bandage in place.

‘You wonder to yourself, perhaps I should have given them the space to help themselves, then perhaps I wouldn’t be so...’ he supported my hand and pulled my finger out. Finally, I thought, he went on ‘...deep inside of this nightmare now’.

I still remember the relief I felt as the tingling sensations came back to my finger and yet I had no idea what papa was talking about at the time, it wasn’t until years later that I’d figured out what he really meant. It was a metaphor and he, papa was my finger, stuck and suffocating in this war, only there in the first place with the intention of doing good, and the bandage was either his beliefs or his comrades or maybe both. While massaging my finger, he continued.

‘Elewa, people will give you all kinds of excuses for war in your lifetime, I’m sure. But really there is no good reason for war.’ He took a deep breath in and exhaled out the last sentence in at a faster pace, as if he’d practised it before.

My hand was now back to normal and Papa had totally lost me by that point, but his hand would heal and our war with the Okena’s would eventually end and I would be part of the solution.

In the years that followed papa would tell me how he gotten that wound. It was from an Okena bullet, scrapping his hand as he prepared to launch his spear. He told me that he fell to his knees, mainly in shock, at the speed and force of the technology. He said that he had to be carried out of that battle by two comrades. One of the men was called Jimmy; papa said that he died on his return to combat, just a few hours later.

I know that he always felt really awful about this, because while he was carried out for a simple wound to the hand. Jimmy suffered a bullet through the neck and he lay there, on the field, in agony, while people stepped on him and over him. While the very life inside of him, slipped away from him. It seemed there was no one around to simply close his eyelids or even say a short prayer for his soul.

Jimmy was special, he didn’t have to help papa that day. His death made papa realise that there were hundreds of special people being thrown into mass graves everyday, who either, couldn’t be identified or who had no living family left. After that day he promised himself to do everything in his power to put an end to the war.

Show Your Support and Raffle Ticket

Pledge to get your name in the back of the book to show your support for Yeseni and The Daughter of Peace and to be entered into a raffle to win a paperback copy of the book.

Sponsor Solange as she runs 10,670 miles virtually around the USA, passing 110 towns and through 34 states, to crowdfund for Yeseni and the Daughter of Peace. Plus get your name in the back of the book to show your support and to be entered into a raffle to win a signed paperback copy of the book. 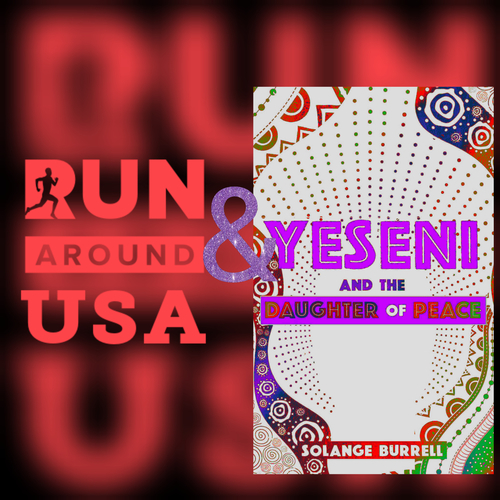