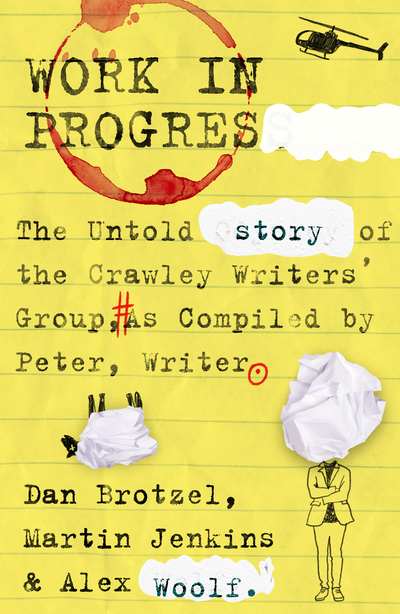 A farcical novel-in-emails about an eccentric writers group. They've all got a book in them, unfortunately.

They've all got a book in them, unfortunately.

In December 2016, Julia Greengage, aspiring writer and resting actor, puts up a poster in her local library inviting people to join a new writers' group. The group will exchange constructive feedback and 'generally share in the pains and pleasures of this excruciating yet exhilarating endeavour we call Literature'.

Seven people, each in their own way a bit of a work in progress, heed the call.

There’s Keith, a mercenary sci-fi geek who can write 5,000 words before breakfast and would sell his mother for a book deal. Tom, a suburban lothario with an embarrassing secret. Peter, a conceptual artist whose main goal in life is to make everyone else feel uncomfortable. Alice, who’s been working on her opening sentence for over nine months. Jon, a faded muso with a UFO complex. Blue, whose doom-laden poems include ‘Electrocuted Angel in the Headlights of My Dead Lover’s Eye Sockets’ and the notorious ‘Kitten on a Fatberg’. And Mavinder, who sadly couldn’t make the first meeting. Or the second. But promises to come to the next one…

Soon, under Julia's watchful eye, the budding writers are meeting every month to read out their work and indulge each other's dreams of getting published. But it’s not long before the group's idiosyncrasies and insecurities begin to appear. Feuds, rivalries and even romance are on the cards – not to mention an exploding sheep's head, a cosplay stalker, and an alien mothership invasion. They’re all on a journey, and God help the rest of us.

A novel-in-emails about seven eccentric writers, written by three quite odd ones, Work in Progress is a very British farce about loneliness, friendship and the ache of literary obscurity.