Wonders and Visions: A Visual History of Science Fiction

By Adam Roberts and Graham Sleight

A sumptuous history of science fiction told through its iconic covers.

Ebook edition and your name in the back of the book.
Choose this reward
$55  + shipping
353 pledges

A first edition of the hardback plus the ebook and your name in the back of the book.
Choose this reward
$60  + shipping
192 pledges

A signed first edition of the hardback plus the ebook and your name in the back of the book.
Choose this reward
$70  + shipping
150 pledges

A hardback, signed and personally dedicated by Adam and Graham, and an ebook.
Choose this reward
$130  + shipping
13 pledges

An editorial report and letter from Graham on your synopsis and the first 50 pages of your SF novel plus everything to collectible level.

2 vintage copies of Astounding magazine plus everything to collectible level

Signed and dedicated copies of Adam's novels: ON, THE SNOW, SWIFTLY and STONE, plus his short story collection ADAM ROBOTS plus everything to Collectible level

Become a part of SF

A Night at the Clarke Awards

Two tickets to attend the Arthur C. Clarke Awards as the special guests of Adam and Graham plus 2 collectible level packages 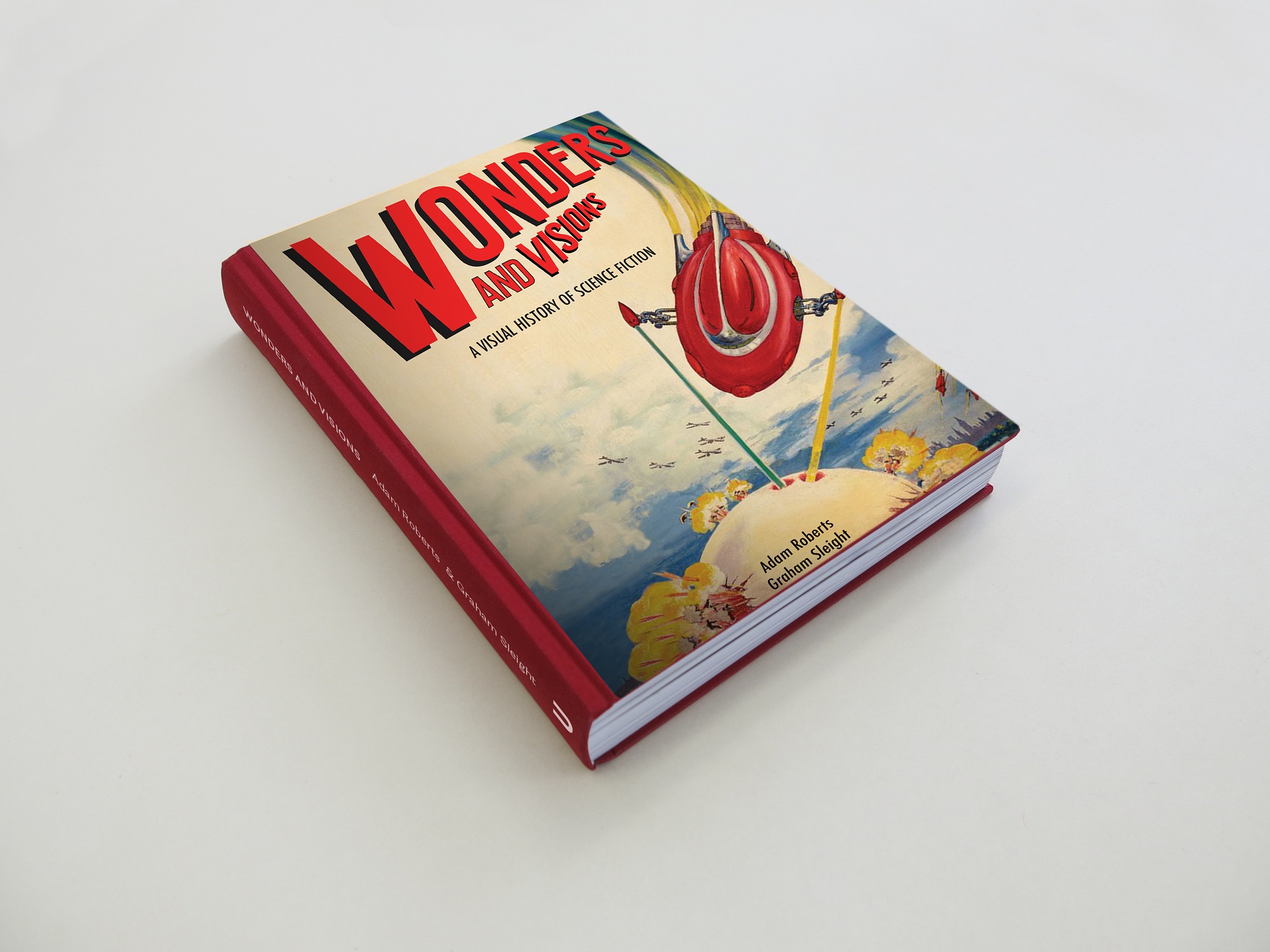 Our book tells the story of science fiction through its most iconic, beautiful, interesting and (sometimes) crass cover art: from the earliest days of publishing in the 19th-century, through the glory days of Pulp magazine covers and the Golden Age, into the endless visual experimentation of the New Wave and so to the post-Star Wars era, when a 'visual logic' comes to dominate not just science fiction but culture as a whole.

With over 350 full-colour images and more than 50,000 words of text this is more than simply an anthology of famous science fiction covers--it is an ambitious attempt to tell the whole history of the genre in a new way, and to make the case that science fiction art, from the sober future-visions of Chesley Bonestell, to the garish splendours of Hannes Bok, from the Magritte-like surrealism of Richard Powers, Frank Freas, Judith Clute, and Ed Emshwiller to the amazingly talented designers and artists of the 21st-century, exists as a vital and neglected mode of modern art as such. 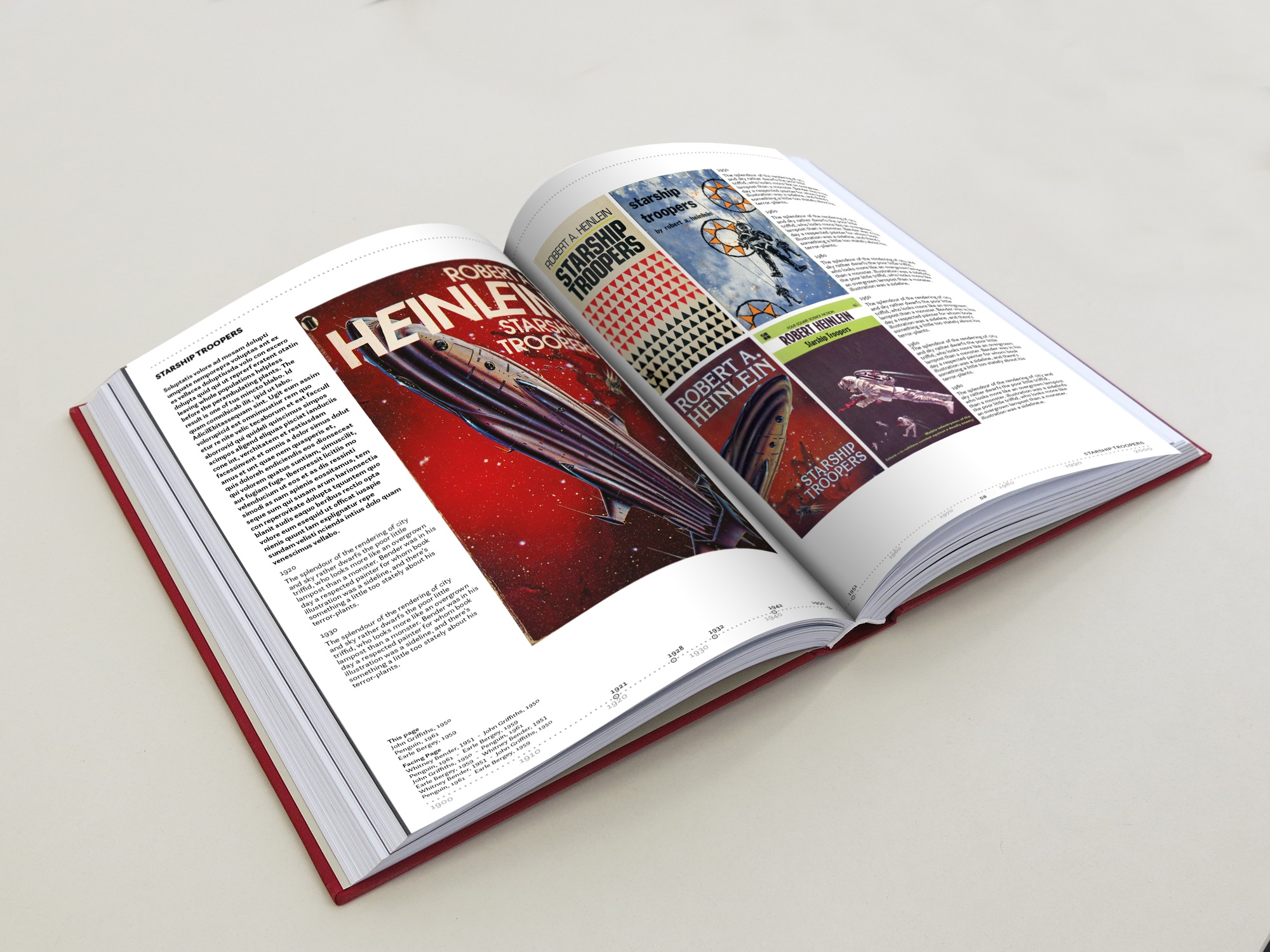 Through much of the twentieth-century it flowed like a subterranean river, influencing artistic Modernism, surrealism, abstraction, op-art and postmodernism, creating a heritage that directly informs the global visual texts of today in cinema, TV, graphic novels and video games. There has never been a book quite like this one.

Printed on 120 gsm art paper, hardbound and hand-sewn, we want this book to be a visually beautiful artifact, although as far as that is concerned we have a head start since so much of the art we want to reproduce is so gorgeous. The intense, inky detail of Virgil Finlay’s illustrations to the extraordinary visions of Paul Lehr, from the cool wondrousness of Moebius to the gorgeous grotesqueness of H R Giger and the amazing cityscapes of Kirsten Zirngibl. 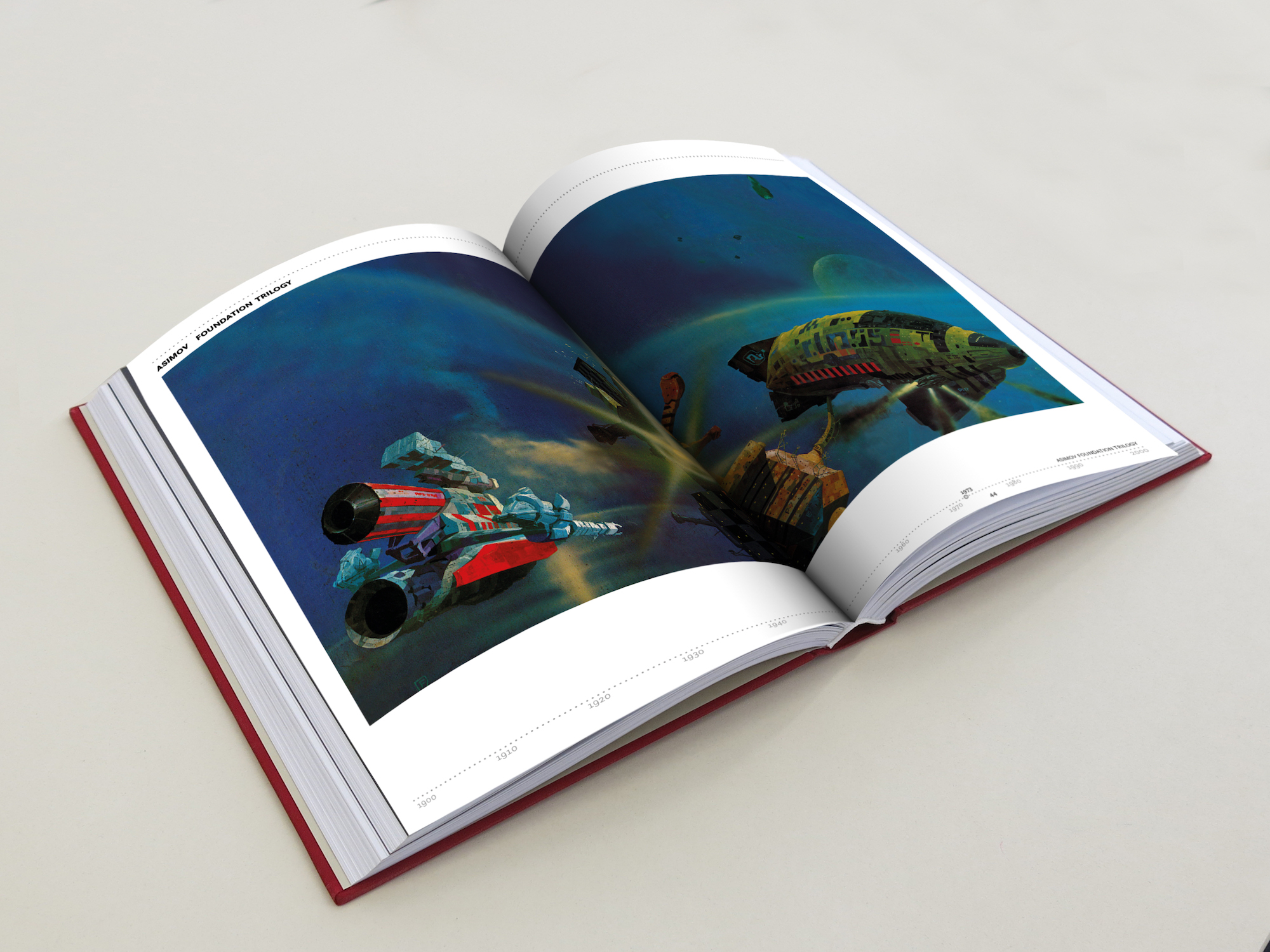 There will be three main types of entry. Firstly, there will be several hundred key covers: one or sometimes two images + plus 150-200 words of text, of the ten (or more) most iconic and recognisable covers from each decade of our history: from Wells and Verne to H Rider Haggard's Barsoom and E E 'Doc' Smith's Lensman, from Arthur C Clarke's Childhood's End and Asimov's Foundation to Leigh Brackett and Joanna Russ's Female Man, from Cyberpunk masterpieces by William Gibson and Pat Cadigan to dystopias by Octavia Butler and Cormac McCarthy, to twenty-first century SF.

Second there will be more extended visual comparative studies, one or two page spreads that compare multiple covers for the same book, to see the way different artists and publishers have approached the task of visualising some of the most famous novels in the history of the genre: The Day of the Triffids; Dune; Left Hand of Darkness and more, as well as surveys of the work of famous illustrators, or publishing houses. 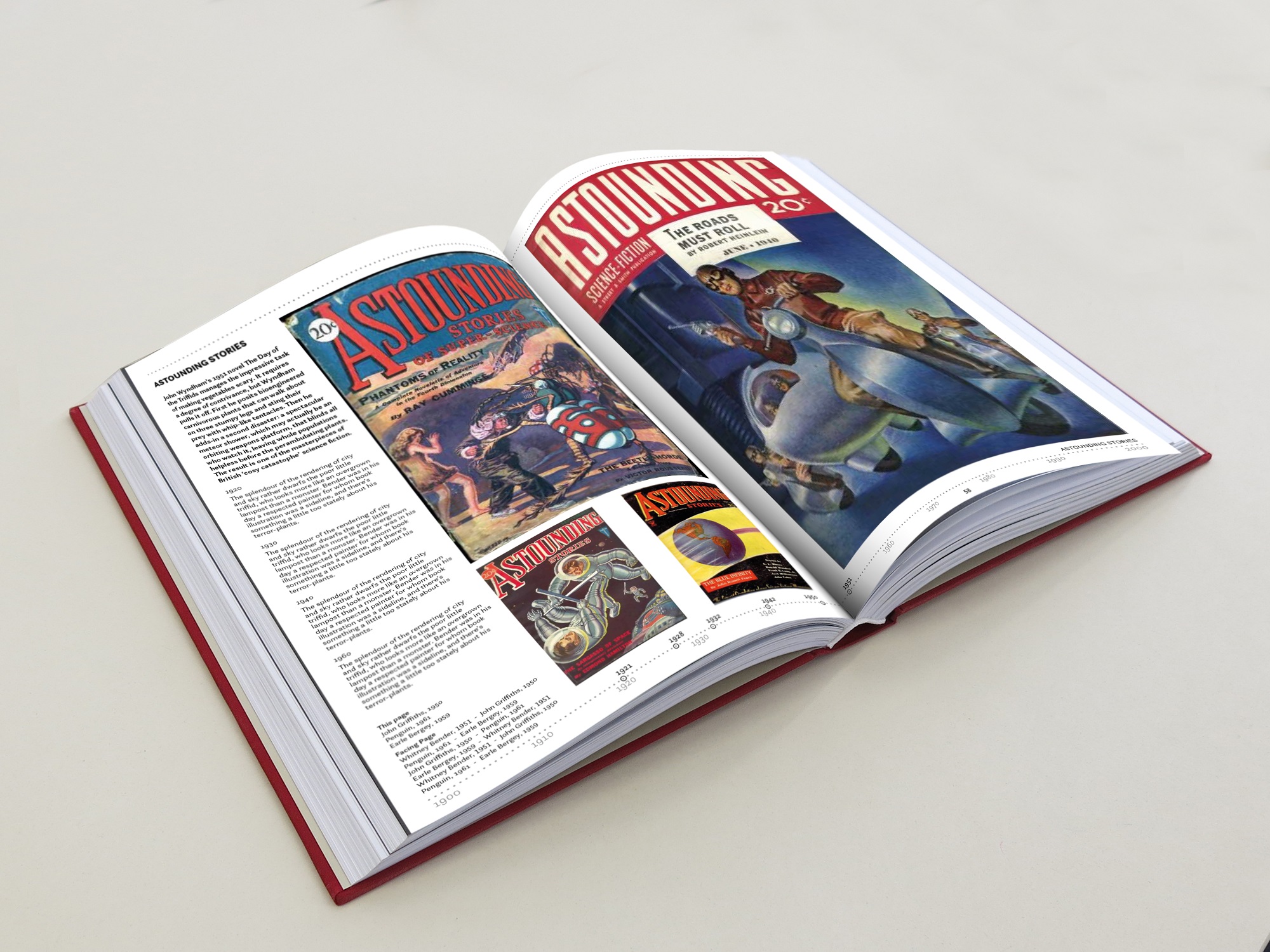 Every visual entry will be accompanied by text, and the whole will threaded together to tell a new story about this important and beautiful mode of art. 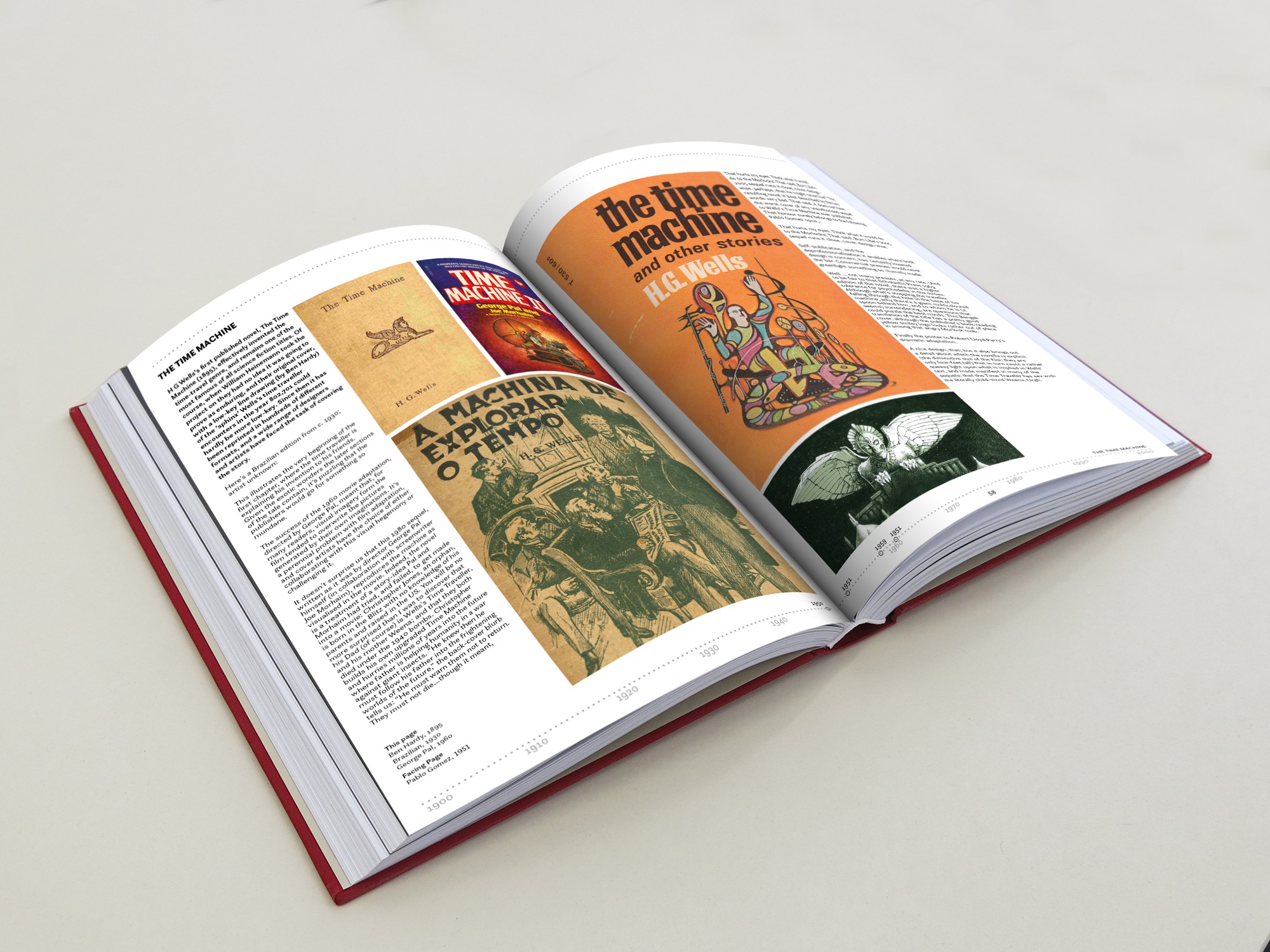 A first edition of the hardback plus the ebook and your name in the back of the book.
Choose this reward
$60  + shipping
192 pledges

A signed first edition of the hardback plus the ebook and your name in the back of the book.
Choose this reward
View all 13 rewards