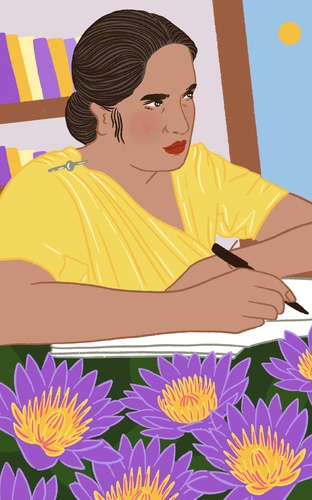 You will by now have seen the Unbound email telling you that they have received the book manuscript for Women Who Won. I wanted to celebrate this moment by giving you the opportunity to see one of the first illustrations of the ultimate political pioneer. Sirimavo Bandaranaike was the first woman in the world to become a democratically elected head of government when she became Prime Minister of Sri Lanka (then Ceylon) in 1960. I'm so thrilled with the vibrancy with which illustrator Emmy Lupin has captured Sirimavo. I hope you like it too.

So the manuscript is written, what a relief! What started as a great idea and a list of names is now a meaty document with many months of thoughtful research and love (truly) poured into it. I'm so glad to have reached this milestone. So what next?

Next is the process of development editing, then copy editing, typesetting and proofreading. There is so much colour in the illustrations (which is wonderful) so colour correction is also an extra part of the process. Unbound then will want to choose the best time to release the book relevant to the publishing market. We will update you on all of this regularly so you know what to expect.

As ever I want to say thank you for making this book possible. When Emmy delivered the final illustrations recently I was so touched when she wrote, "I just wanted to say, not only has this been an amazing project to work on, and thank you to everyone for asking me to do it - but also how much I learnt when illustrating the women, and how important this book is." I feel lucky too, to have had the opportunity to learn so much and it wouldn't have been possible without you.

Finally - I will be in touch with those of you who have pledged for walking tours to arrange dates for September and October. I'm really looking forward to going on that journey in Westminster with you.

Until next time, keep winning.

It's all shaping it. Can't wait to see the finished result, Ros x

I am BEAMING with pride. Can't wait to hold this brilliant and important book in my hands in the near future. Congratulations Ros!! x