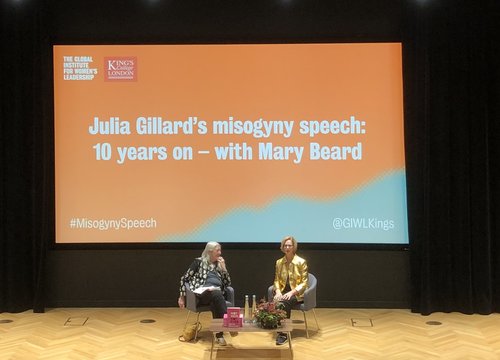 It's been a while since I updated you and I'm happy to tell you that the editing stage of Women Who Won is going well. The development edit has been completed with minimal changes and now we have moved on to the copy edit. Great progress!

I was prompted to write to you because last night I was in a room with one of the 70 women in the book. Julia Gillard was talking to Mary Beard to reflect on 10 years since she gave her speech on misogyny in the Australian parliament. I came away with a strong admiration for her thoughtful reflections on her experiences as a woman in politics.

Gillard said she hadn’t anticipated how sexism and misogyny would dog her premiership. She expected a negative reaction at the start but “I thought just doing the job, being seen to be good at it, that all of that would fall away.” It didn’t, and the culmination of that pressure was the speech which chimed with so many women around the world.

I want to leave you with the words that struck me the most from Julia Gillard. She was asked by an audience member if she would still recommend women go into politics. She was adamant that despite the sexist challenges, "There is a whole other world of politics - enacting your values." She talked about meeting a young woman called Sophie who is profoundly disabled. Sophie challenged her on several points about her legacy but also descibed the way her life had been changed by Gillard's National Disability Insurance Scheme. Gillard said enacting legislation to improve people's lives is why being a politician is so valuable, "They are the things that really endure and matter."