Sorry I haven't been around the shed for a while. I blame Mahler.

It was Mahler, if you recall, who told his friend Bruno Walter not to bother looking at the dramatic and precipitous Höllengebirge because 'I have already composed it in my third symphony', this being a decent representation of the truth, because said symph contains some stirring stuff.

It wasn't Mahler's third symphony that occupied me, but the fifth. Slightly shorter than the third, it is nonetheless a time- and energy-consuming endeavour for the conductor (and of course for the musicians, who do the really heavy lifting). There was music by other composers, too – Janacek, Adams, Brahms to name a few – all courtesy of this organisation: www.rehearsal-orchestra.org, a warm-hearted bunch of people who tolerate my excessive demands and bad jokes with surprising good humour.

While I'm immersed in things like Mahler, other creative pursuits take a backseat, and on the few occasions I did sit at the keyboard I could manage nothing more coherent than adsoifahsdfkjabepo.

I did manage to get some birdwatching in, and even added some interesting ones to my list, despite August traditionally being a quiet time of year, birdwise. This is mostly because I was in various parts of Scotland for a couple of weeks, and there are birds there that you can't find on Clapham Common. But if you want to read about them you'll have to wait for the book. Sorry.

One bird I can tell you about is the mallard, of which we saw dozens on a canal walk in Chester (just to clarify, we were walking alongside the canal, not on it – conductors are known for their belief in their own abilities, but even we have our limits). The males, at this time of year, are in what is called 'eclipse' plumage. After breeding they moult, a risky endeavour because it involves jettisoning their flight feathers, leaving them flightless and unable to escape predators. As there is a well-stocked falconry in the Cathedral grounds just yards from the canal, these particular mallards are braver than even they might suspect. The result of this moult is that the males adopt the predominantly brown colouring of the females for a few weeks, as if trying it on for size. Brown feathers are underrated, I've always felt – birds are very rarely just one shade of anything, and examination of the plumage of a 'drab' bird will nearly always yield beautiful shadings and streakings and interesting variations. At the moment the only thing differentiating male mallards from females is the colour of their bills, which remain stubbornly yellow. It's as if they've gone to great lengths to disguise themselves as someone else but have forgotten to take off their lapel badge.

The ducklings, meanwhile, were unbearably cute little parcels of fluff. Six of them nearly got run over by a narrow boat, escaping only by putting on an impressive burst of speed which in other circumstances (and, to be fair, if they weren't ducks) would have landed them in doping control. 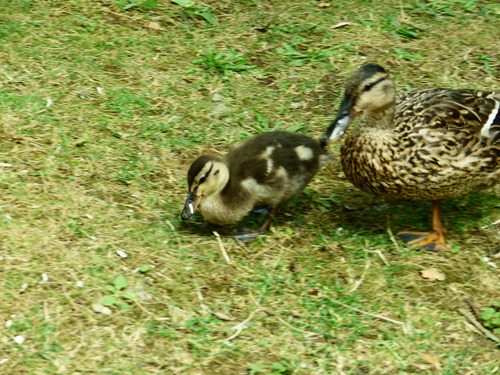 We were also able to verify at first hand the fallacy of the oft-repeated claim that ducks' quacks have no echo. Under a waterside bridge they were echoing like there was no tomorrow orrow orrow orrow... Don't believe everything you read on the Internet, sheeple.

These modest travels reminded me that 'common' is a relative term. I saw more oystercatchers, for example, during a squally bike ride along the coast near Edinburgh than I would in a decade in central London. But not a single parakeet.

It's good to be back, though. There's a great spotted woodpecker on the cordaline at the bottom of the garden, and a juvenile robin's just popped up onto the feeder. No swifts, though. They've gone to Africa, taking high summer with them. I feel as if I've let them down by not being here to bid them farewell. Go well, swifts. See you next year.

Incidentally, funding for the book has now tipped over the 75% mark, which is bloomin' fantastic. And supporters now number over 200, a simply mind-boggling number of generous people who appear to be interested in my inane ramblings, or at the very least aware that if they didn't pledge I would be simply intolerable until they did. Thanks, as always, to these kind and sensible people.

Still trying (not too hard) to get Mahler 5 out of my head - thank you again for the total 'angst' immersion. As for mallards, I think they would have enjoyed the weather here today in Edinburgh...