Into The Tangled Bank

It’s just over two years since Why Do Birds Suddenly Disappear? was published, and on 9 July its 'sort-of-sequel' will be unleashed on an unsuspecting world.

Into The Tangled Bank is in some ways similar to Why Do Birds Suddenly Disappear? It is, for want of a better phrase, 'nature writing', and it takes me on a sort of quest. But there’s no particular target in view, no 'I have to see these things by the end of the book'. And I don’t restrict myself to birds. Butterflies, trees, flowers, earthworms, lichens, otters, moths, fungi, lizards, dolphins, spiders, bees, seals, dragonflies, mosses, and much more – all of them come under my scrutiny at one point or another.

Above all, I look at people: those like me who have an amateurish enthusiasm for nature; those like Charles Darwin and many others who devoted their lives to the study of it; and those like Richard and Giselle, the wardens of the bird observatory on Skokholm Island off Pembrokeshire, whose expertise leaves me breathless with admiration. It's a journey from my doorstep to some of the wildest places in Britain, and all the stops in between,

Here’s the blurb, from the book's publishers, Elliott & Thompson: it’s often said that the British are a nation of nature lovers; but what does that really mean? For some it’s watching racer snakes chase iguanas on TV as David Attenborough narrates, a visit to the zoo to convene with the chimps; for others it’s a far-too-ambitious clamber up a mountain, the thrilling spectacle of a rare bird in flight.

Lev Parikian sets out to explore the many, and particular, ways that he, and we, experience the natural world – beginning face down on the pavement outside his home, then moving outwards to garden, local patch, wildlife reserve, craggy coastline and as far afield as the dark hills of Skye. He visits the haunts of famous nature lovers – reaching back to the likes of Charles Darwin, Etta Lemon, Gavin Maxwell, John Clare and Emma Turner – to examine their insatiable curiosity and follow in their footsteps.

And everywhere he meets not only nature, but nature lovers of all varieties: ramblers, dog-walkers, photographers; loving couples, striding singles, families; kite-flyers, den-builders, grass-loungers; young whippersnappers, old farts, middle-aged ne’er-do-wells; beginners, specialists, all-rounders; or just people out for a stroll in the sun.

Warm, humorous and full of telling detail, Into the Tangled Bank puts the idiosyncrasies of ‘how we are in nature’ under the microscope. And in doing so, it reveals how our collective relationship with nature has changed over the centuries, what our actions mean for nature and what being a nature lover in Britain might mean today.

And here’s a few nice things people have already said:

'Funny, accessible and full of wonders – a genuine breath of fresh air.' – Melissa Harrison, author of All Among the Barley

'Lev Parikian is one of those rare beasts: a nature writer with a sense of humour. This is a witty, touching and profound book about one man's burgeoning relationship with the natural world - and it's also a joy to read.' – Stephen Moss, naturalist and author

'An open, warm and unique journey full of unabashed enthusiasm for the natural world. A rare thing.' – Stephen Rutt, author of The Seafarers

You can pre-order Into The Tangled Bank from loads of places: Hive, Waterstones, my lovely local Bookseller Crow, or contact your own local bookshop and ask them to order it – they'll be only too pleased to do so. 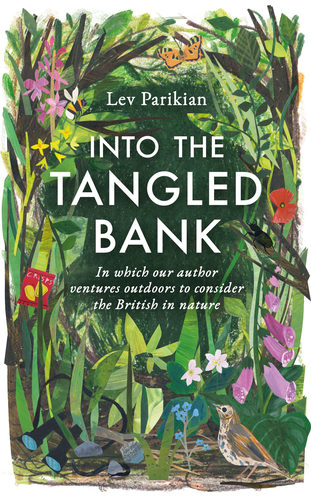