In my last update I shared Unbound’s schedule for making a book, and reported that, in accordance with the basics of quantum theory, we were simultaneously at stages 3 and 4.

Things have progressed in the intervening three weeks (quicker than I thought, to be honest – in my weaker moments I had nightmare visions of my manuscript coming back with a pithy 'no good – rewrite' scrawled across the top) and we are now simultaneously at stages 4 and 5 on the checklist below.

1. Funding target reached (TICK)
2. The final draft of the manuscript is delivered (TICK)
3. The editor edits. And edits. (TICK)
4. Cover and artwork design begins. (We are still a little bit here)
5. The copy editor reviews the manuscript for consistency. (We are also about to be here)
6. Typesetter formats manuscript for printing
7. First proofs come back and are sent to the proofreader
8. Final edits are made
9. Artwork finalised
10. Final proofs go to press

To give a bit more detail:

Stage 4: we have agreed on a cover design, but it hasn’t been finalised.

Stage 5: Scott has done his work on the structural edit, I have rewritten accordingly, and we have now sent our agreed version on to Unbound’s copyediting team. They will now put us to shame by finding a load of stuff we’ve missed. Examples of this will no doubt include my inability to get through a 75,000-word book without using words like ‘oojah-cum-spiff’, whether a reference to a specific line from the film Planes, Trains & Automobiles will perplex too many people (Scott and I agree that the people who matter will understand it), the correct spelling of Mao Zedong/Mao Tse-tung, and the equally vexed question of the capitalisation of bird names – Little Grebe or little grebe? (NB This is a notorious birding minefield – please leave your ill-formed but dogmatically-held opinions below.)

We are, therefore, in what I believe is known as a Good Place. There’s a fair way to go yet before the finished article lands in your excited and trembling hands, but we are getting there.

Meanwhile, with my musical hat on, I’ll be disgracing the airwaves on Sunday (and afterwards on iPlayer) talking about the role of the conductor, a subject prompted by a letter from a listener which included the words ‘self-aggrandising buffoons’.

Thank you for reading this far. As a reward, have the surprisingly attractive back feathers of a Canada goose. 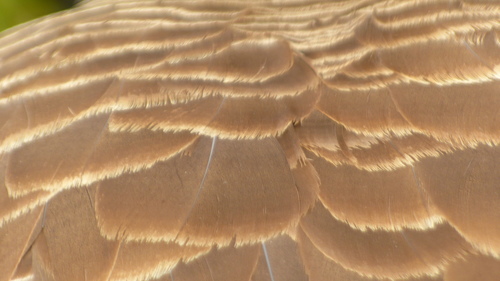 I thoroughly approve of oojar-cum-spiff/spliff. Computer, however, doesn't. Changed it to all sorts of strangeness. I look forward to hearing your wise words on Sunday.

Were this an article in the Proceedings of the Society for Bird-Botherers, capitalisation might just about be ok. But in a book for normals, absolutely not. This is the final word on the subject, and all other opinions are wrong.

Two suggestions
1. Change name of organisation to Hidebound
2. As with plants, Latin names should be used for all birds and of course printed in italics

Thanks all. Lesley: I can't remember what I said for the radio programme, but I fear 'wise' isn't the word. Matthew: I shall present your closely-argued case to the editors. Philip: I spent the best part of a morning spellchecking the scientific (not Latin, please – possibly 'Latinate') names of all the birds for the final list, so there's a decent chance your wish will be granted. And you'll both (Matthew and Philip) be pleased to know that our mutual cricket club gets a decent mention in the section concerning Psittacula kramerii (consider those last two words italicised).