I do apologise. I’ve abandoned you in the shed without so much as a word for weeks and weeks, and now the biscuits have run out and you’ve resorted to eating potting compost. As I say, I apologise.

But now I’m here, I’d like to answer your questions and ask a couple of my own.

Firstly, yes the birdwatching is going spiffingly, thank you so much for asking. We were up in Northumberland a couple of weekends ago, and the rest of the year will contain as many and as diverse trips as I can possibly manage in pursuit of those last elusive species. It looks as if it might go to the wire.

One thing I’m interested in is how much people in general know about birds. It’s not that I’m planning to ‘dumb down’ or ‘clever up’ to fit my perceptions of people’s expertise, but it's an interesting bit of casual market research for me, and the intellectual challenge offered by the extremely short quiz below should be just the thing for a Friday afternoon.

So, how far down this list of questions can you get before answering 'no'?

Can you tell the difference between:
1. A bird and a dog?
2. A pigeon and an ostrich?
3. A great tit and a starling?
4. A song thrush and a mistle thrush?
5. A carrion crow and a rook?
6. A silent chiffchaff and a silent willow warbler? (NB the silence is quite important)
7. A first winter herring gull and a first winter yellow-legged gull?
8. A Manx shearwater and a Yelkouan shearwater, from a mile away in dense fog?

Just post below the first question you answered ‘no’ to, with any comments you feel moved to add.

As a reward, have a picture of a black-headed gull abiding by the rules. 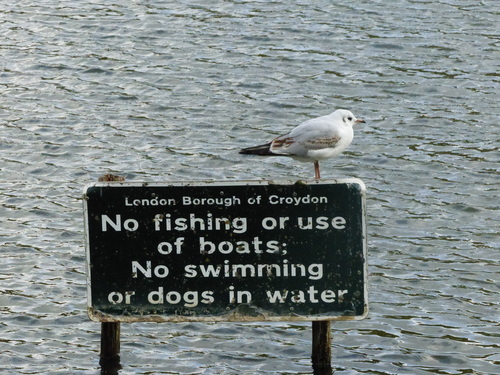 4. Very confident up to there, no idea at that point and beyond. I've been inspired to google. Interestingly I'd heard tell that Brahms 2 was once thought to conduct itself, but a recent performance proved the essential contribution conductor can make. Only heard tell mind you ;-) I quite like potting compost.

Like most above I got stuck on 4. Can't help AT ALL with the rest. No idea at all! Will I therefore understand the book?
Good luck with the writing anyway.
A xx

Any spare dunce caps in there? Q4 and I'm lost. Mind you, it's been a while since I've seen (or heard) a thrush, given I'm in Australia. You could try me on Currawongs, Sunbirds and the much-derided Noisy Asian Mynah.

Would have to pick up the identification book or app. to get past 7 and that's after 65 years of birding. Tut, tut!

Thank you for all your replies. I find it quite touching that so many of you feel ashamed by what seems to be a perfectly acceptable level of knowledge (and pretty much what I expected). Richard M, on the other hand, is quite right to tut at his own failure ;-)
For what it's worth, I would be fine on 1-5, would need a good long look to get 6 (which you don't usually get), and recently looked up 7 only to forget what I read almost instantly. 8 is ridiculous.

I don't even know the difference in airspeed velocity between the unladen African and European swallow. Wait...